One Nation. One Team.

"One Nation. One Team." was a campaign designed to leverage social media support for the USA team at the World Cup and render it in a unique setting in real life. U.S. Soccer and FleishmanHillard tapped into fan support for the team around the country, displaying messages of support from fans in different places IRL while simultaneously capturing/interacting with various celebrity personalities supporting the team during a successful summer.

U.S. Soccer and Fleishman Hillard connected fans around the country to the USA team competing at the 2014 FIFA World Cup in Brazil by displaying IRL content and imagery around the tagline of "One Nation. One Team."

U.S. Soccer crowdsourced messages of support across its social media outlets and chose the most powerful ones to print and display IRL. Messages were chosen from fans who responded and rallied around the "One Nation. One Team." concept and hashtag #1N1T. Messages of support came from around the country and were placed in a series of unique locations, including in the team's locker room during various matches in the buildup to Brazil, on the team's plane, the back of the jersey worn on June 22 against Portugal and in the locker room for multiple games at the World Cup.

In the buildup to matches, U.S. Soccer and FleishmanHillard also sent USA jerseys to celebrities in various fields with the direction to share a photo of them in the jersey and utilizing the "One Nation. One Team." tagline.

The overall strategy reflected a desire to connect players to supporters and unite support for the team competing on the world stage. The campaign built momentum leading up to the World Cup and lasted for the duration of the team's time in Brazil, picking up steam as more people joined in and became familiar with the team.

The "One Nation. One Team." connection offered an easy entry point for fans to support the cause and connect with the guys in Brazil. The result was simultaneously a unique place for fans to show their love for the team, with their messages placed in strategic locations – and the subsequent extension of the U.S. Soccer brand through voices and support of celebrities around the country.

Video for One Nation. One Team. 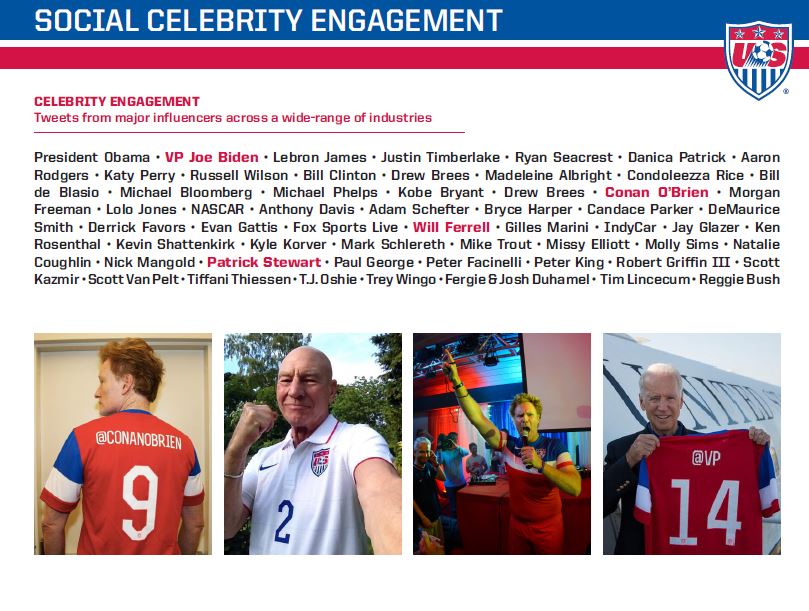