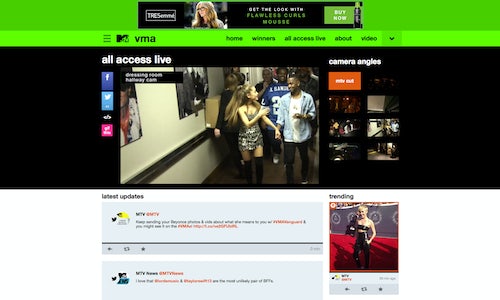 Objective: By design, MTV strives to re-invent the VMAs each year so the show stays on trend with today's socially-driven culture hungry for immediate, shareable content that can be translated from linear Television programming into quick, consumable social bits. The 2014 VMAs marked the biggest push to innovate fan engagement across all screens to let consumers experience top moments from the VMAs in real-time.

Strategy: MTV VMA All Access Live is a multi-screen experience optimized for web, mobile and tablets to provide fans with exclusive behind-the-scenes looks into the world of the "MTV Video Music Awards," along with additional content including artist interviews and non-broadcasted moments from the show. The platform was specifically redesigned for the 2014 award show with multiple mobile enhancements because MTV wanted to cater to its 51 percent of viewers that consume content via smartphones.

In 2014, fans were also able to capture their favorite VMA moments in highly shareable GIFs via the on-demand version of the Award Show that was uploaded to the All Access Live platform 24-hours post-show, while VMA performances were almost immediately available for fans to share socially.

Outcome: All Access Live was a part of the VMA story this year — what was happening backstage and in the audience through the strategically placed cameras was as meme-worthy and compelling as the main stage itself. The VMA All Access Live Stream delivered 6.5 million streams, clocking in as the second most streamed live stream in MTV history behind the 2013 VMAs All Access.

MTV's VMA All Access is a multiscreen experience featuring exclusive live streamed feeds showing content pre, during and after the network's annual Video Music Awards show. With a variety of camera angles placed throughout the audience, backstage and on the red carpet, viewers are able to stream behind-the-scenes moments that give a sneak peek into the backstage world of their favorite artists. Non broadcasted moments like artist interviews, backstage performance preparations, audience reactions, and celebrity interactions with other artists makes for a unique experience accessible by web, mobile and social.

The VMAs are one of the largest opportunities for the network to engage with fans across all screens, and 2014 marked the biggest VMA multiplatform social integration to date, as All Access was specifically redesigned for mobile screens in 2014. As part of the network's "always on" strategy, in-line with the way its audience consumes content, the mobile redesign helped the MTV app see its largest day of visitors and installs to date during the VMAs.

MTV also built upon their social influencer relationships for the highest level of involvement ever at the VMAs by inviting 8 social influencers including JennXPenn, King Bach, and Rebecca Black, among others to be on the ground at the VMAs, co-creating content around the venue and activating their fans across all social channels. Fans at home were able to catch the influencers in audience shots and around the venue via All Access Live.

MTV's audience is increasingly viewing content across all platforms. The network uploaded the full award show to the All Access platform just 24-hours after the original airing, which resulting in the on-demand version drawing in over 7 million streams. Additionally, the 2014 VMA All Access Live Stream delivered 6.5 million streams during the VMAs, making it the second most watched MTV digital live stream of all time. The day following the VMAs marked the best day of 2014 for MTV Editorial with nearly 3 million visitors and 4 million page views; the most views since the day after the 2013 VMAs.

All Access helped to spur social and shareable content, propelling the VMAs to be named the most social event of the summer across all television according to Nielsen Social, producing 12.6 million tweets and generating 259 trending topics across multiple social channels. MTV saw nearly 63 million social interactions during the night of the show. 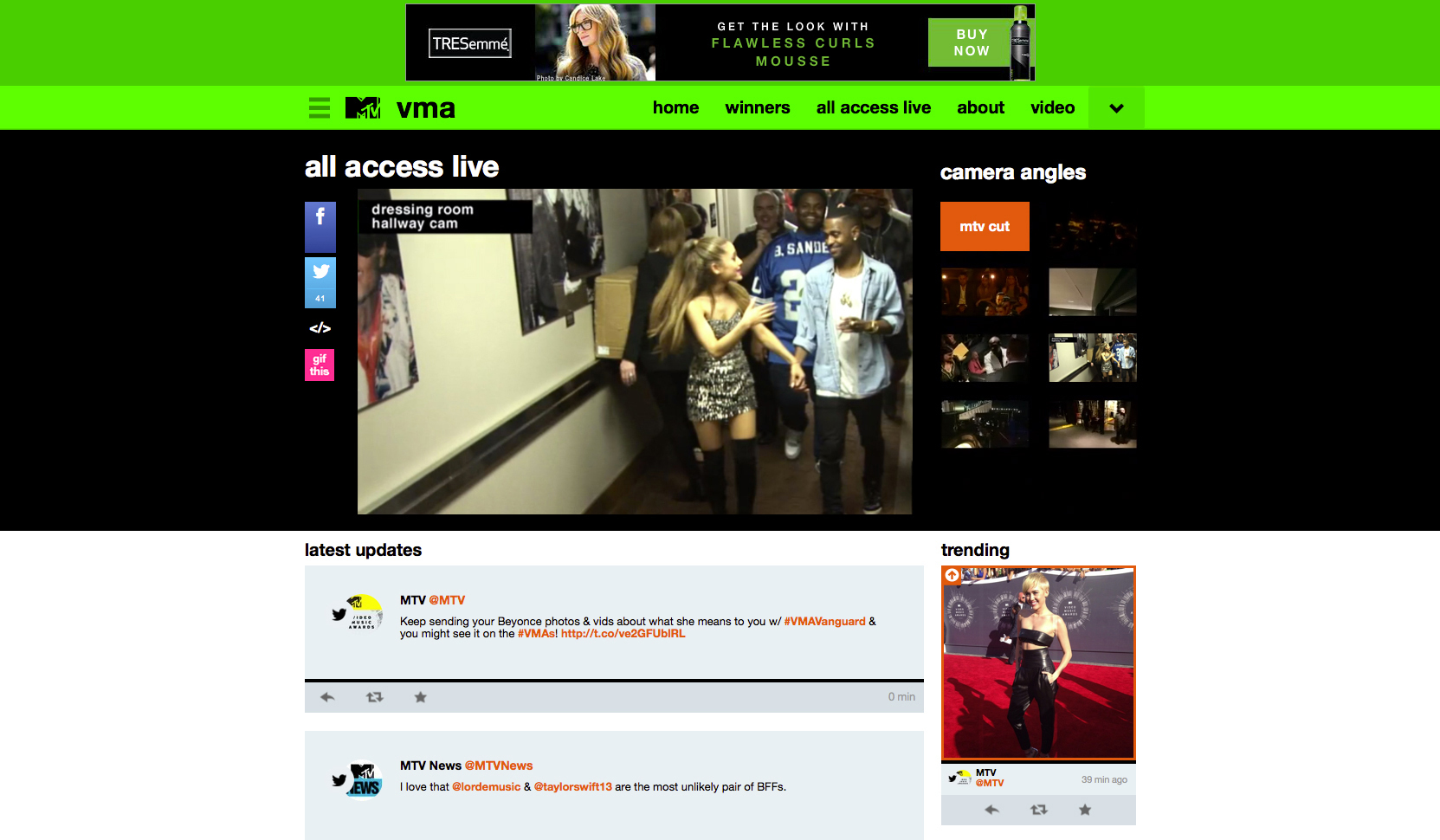 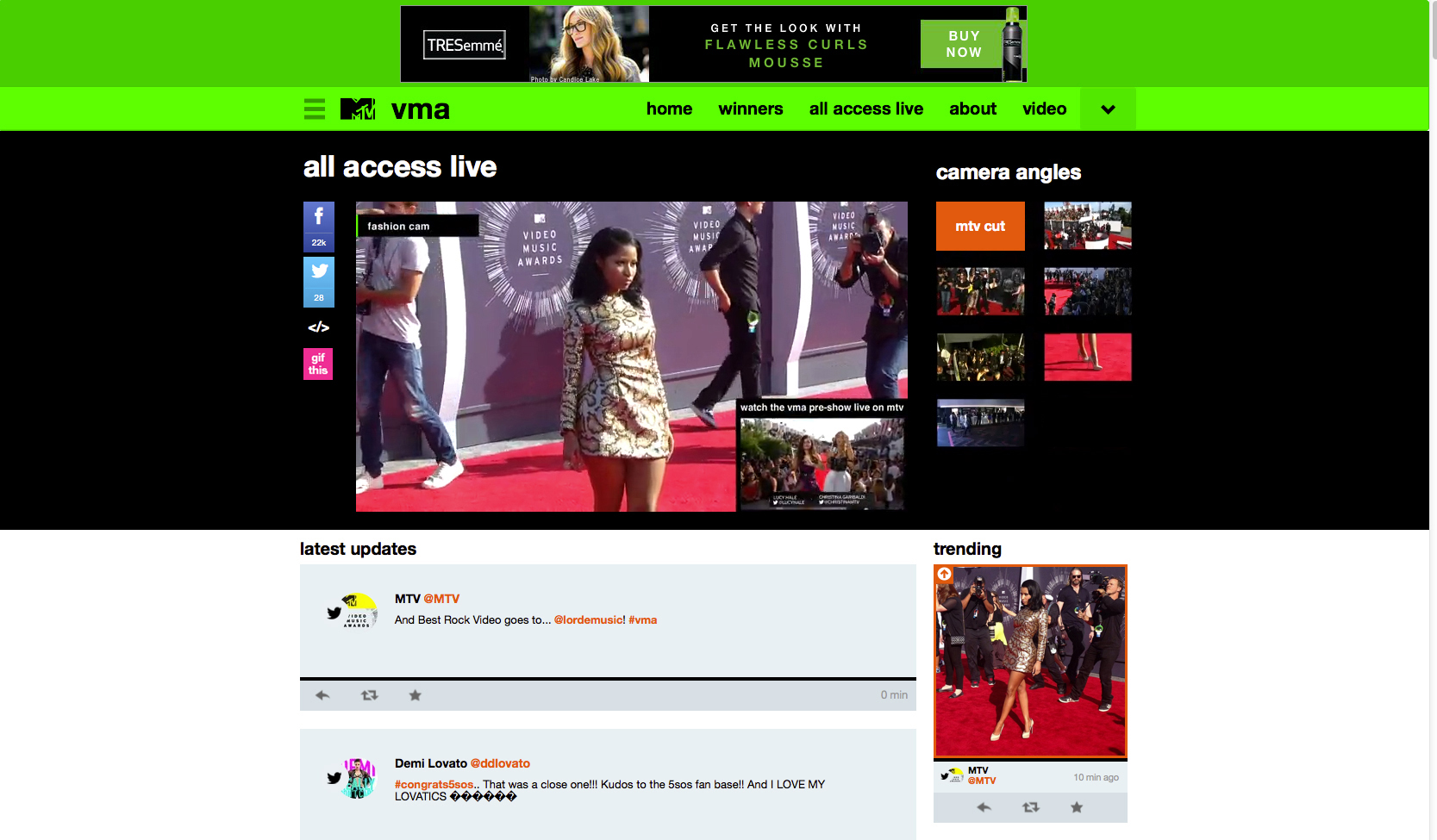 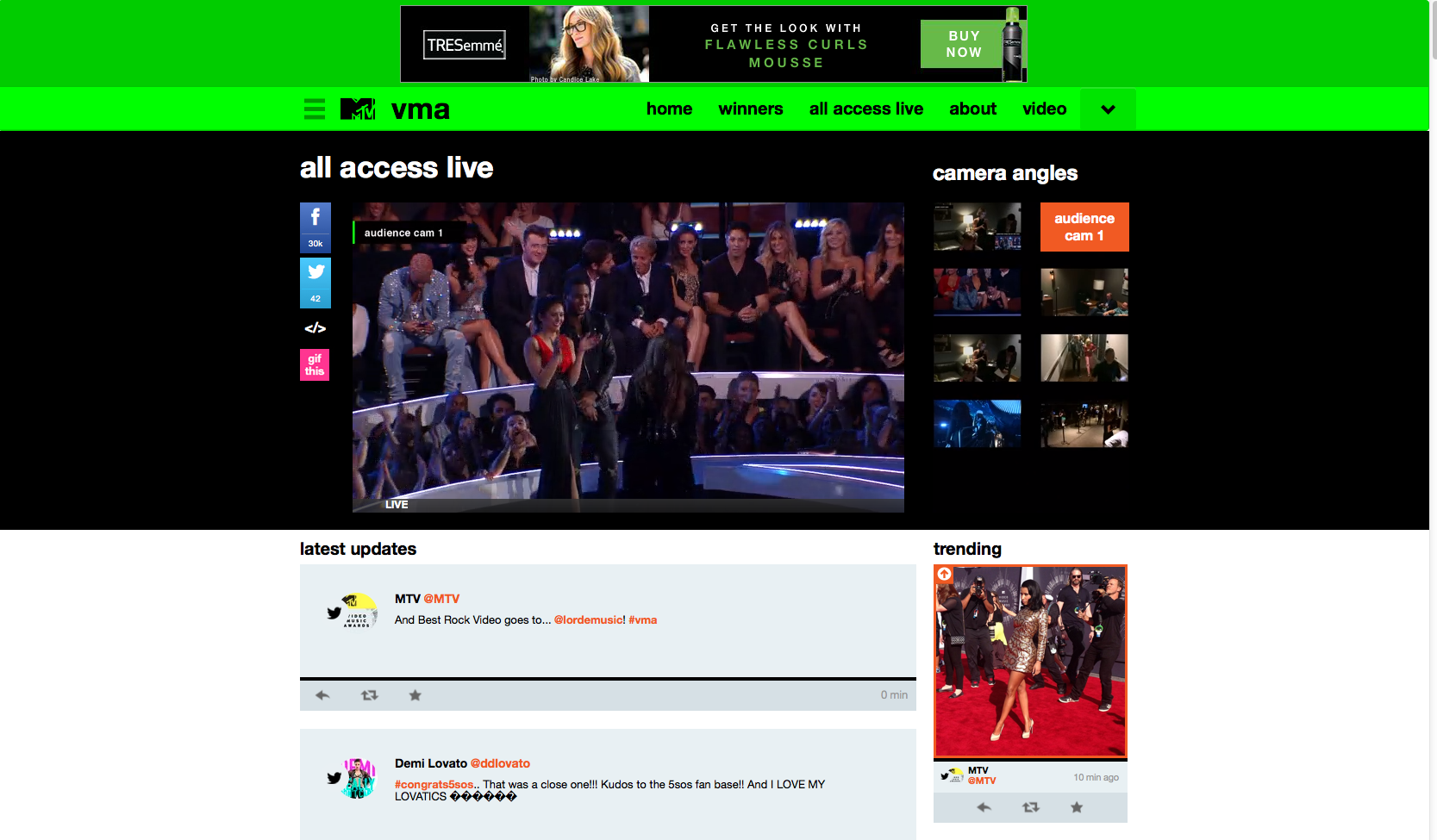