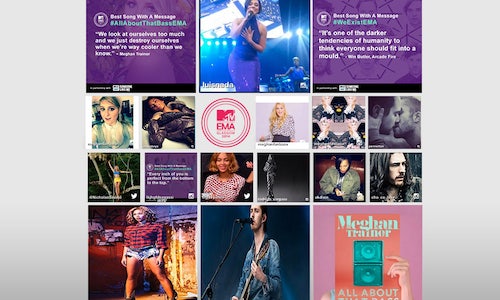 The MTV EMA is a one-of-a-kind annual event that celebrates music from around the globe, from international superstars to local-favorite artists—and gives fans around the world the power to choose award winners. The 2014 event, hosted by Nicki Minaj, marked the EMA's 20th anniversary and was broadcast live from Glasgow, Scotland. The show aired in more than 160 countries and territories. The event was supported with a wide-ranging digital and social campaign including 34 regional websites in 21 languages, localized iOS and Android apps, and a massive international social media presence. For the first time in EMA history, purely hashtag-based voting was introduced to the campaign, including the brand-new category Best Song With a Message, which highlighted MTV's commitment to frank discussion of social issues while raising awareness of a campaign sponsor's socially minded initiative.

For the first time in the EMAs' 20-year history, the 2014 awards show introduced a new award: Best Song With a Message, designed to get young people talking about important social issues of the day. This category, voted on exclusively by hashtags in Twitter, Vine, and Instagram, recognized music that deals with social issues meaningful to young people—and the social media activation spurred dialogue amongst them.

The Best Song With a Message category nominated 5 popular songs. To see voting activity, fans around the world could toggle between visualizations on the 37 MTV EMA websites: one mosaic with real-time vote counts for each artist/hashtag; or the real-time stream of posts tagged with the nominees' hashtags. To encourage fans to rally behind their chosen song, the MTV EMA Facebook page posted fan kits with graphics summing up each one's message (e.g. "I support an end to homophobia" for Hozier's "Take Me to Church") along with the voting hashtag.

The voting category was presented by 2014 MTV EMA campaign sponsor Someone Like Me, a partnership between Durex and MTV's pro-social arm, which aims to get young people talking openly about issues such as sexuality, gender, and identity. The 'Best Song With a Message' category was designed to inspire meaningful social conversation to foster awareness of these issues. By highlighting the work of artists who tackle topics often considered taboo—and get fans dancing while doing so—the category served as a seamless integration of the sponsor's mission with the MTV EMA campaign's mission to give fans a voice and express their feelings about music that means something to them. A selection of posts by fans who were inspired by one of the nominated songs were featured on the network of MTV EMA websites.

More than 1.2 million hashtag votes were cast during the 11 days the Best Song With a Message category was open for voting. Fans around the world got their payoff seeing Beyoncé's "Pretty Hurts" announced as the winner during the live MTV EMA broadcast, with 600,000+ votes (breakout star Meghan Trainor's body-positive pop anthem "All About That Bass" was a close second with 500,000+ votes), during the live broadcast of the 2014 MTV EMA from Glasgow. 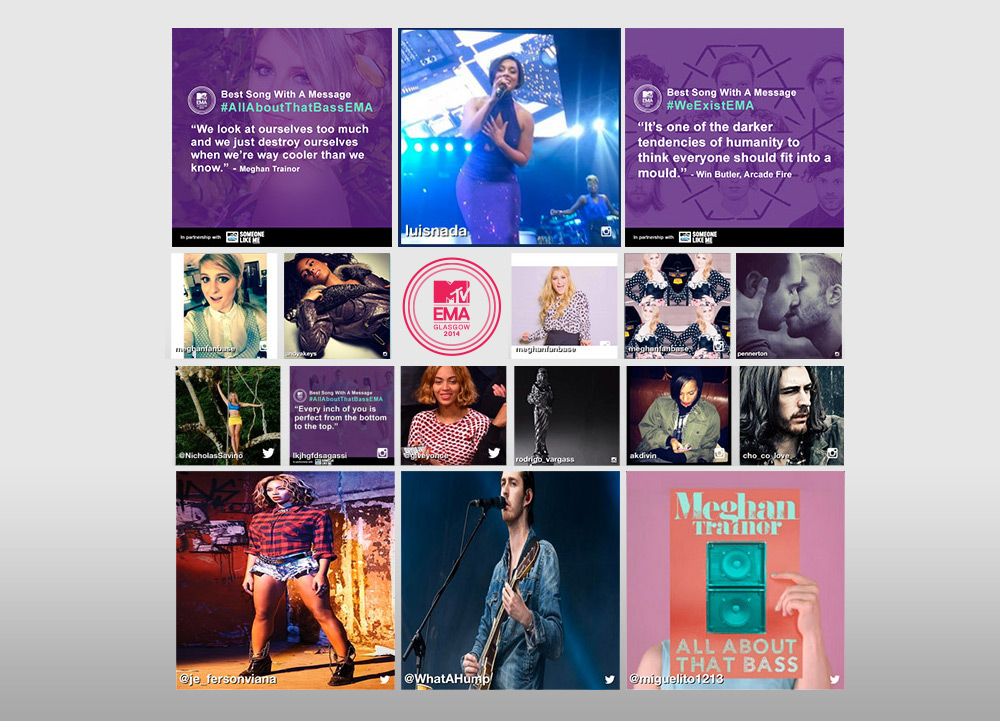