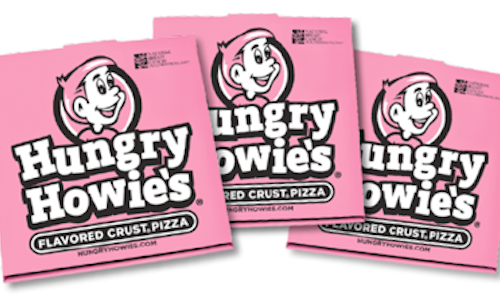 In 2009, Hungry Howie's Pizza found itself in a price war to win pizza orders during a recession. While other chains cut quality to reach a lower price, Hungry Howie's didn't want to change the quality or the price. In fact, they even wanted to give away some of their profits to charity.

DBA Worldwide decided to take a unique approach to making a difference in the community through Howie's core product, pizza. We figured what better way to get people excited about eating pizza than by knowing Howie's would be giving a portion of their profits to breast cancer research during National Breast Cancer Awareness Month in October.

We developed a special pink-colored pizza box as well as the full communications plan for the campaign we titled Love, Hope & Pizza.

The idea was to get our more than 500 Hungry Howie's locations across the country involved (both on- and offline) in this philanthropic effort that highlighted the importance of breast cancer awareness.

For every pizza sold and every story of hope shared online during October, we donated a percentage of our sales to the National Breast Cancer Foundation.

With overwhelming success, we've continued Love, Hope & Pizza every October since 2009. Please see the next section for a list of results.

As mentioned, the objective of Love, Hope & Pizza is to get consumers excited about eating pizza while making a difference in the community. We have done this campaign annually since 2009. The key features and results for 2014 are as follows:

-We partner with the National Breast Cancer Foundation

-We invited people to take part in videos we produced that highlighted real stories of cancer survivors, as well as testimonies of people who have lost loved ones, but not hope

- Our media mix consisted of high-profile, prime-time female-targeted television programming in the Detroit DMA. Radio was in the Detroit, Flint, Saginaw/Bay City, Lansing, Grand Rapids, Kalamazoo and Battle Creek radio metro areas. Contextual ads were purchased on Facebook and geo-targeted to the Detroit, Flint/Saginaw/Bay City, Lansing, Grand Rapids / Kalamazoo / Battle Creek, Los Angeles, Cleveland / Akron / Canton and Phoenix DMAs. For the contextual ads, we used behavioral targeting and created a target "bucket" of women who have "friended" breast cancer-related Facebook groups or made any reference to "breast cancer" in their Facebook profiles. We also used Twitter as part of our social media mix.

- In addition to the television placement for the Pink Box campaign, WDIV-Detroit partnered with Hungry Howie's for an internet-based contest. WDIV was provided with 200 Kenny Chesney tickets and gave away 20 pairs of tickets per day over the course of 10 days.

- By entering the contest, the viewer was automatically entered into the Hungry Howie's email club. Upon completion of entry, the entrant received a coupon for free Howie Bread.

-For every pizza sold and every story of hope shared online during October, we donated a percentage of our sales to the National Breast Cancer Foundation

Evidence of the business success:

- In our consumer study, the chain's support of breast cancer as a cause ranked highest as the reason people chose Hungry Howie's … even higher in importance than Howie's signature flavored crust. In fact, more people remember the pink pizza box than the Super Bowl spots we ran.

Evidence of the program's cause-related results

- Hundreds of photos have been posted to Instagram showing Love, Hope & Pizza moments

- Over 86,000 bracelets have been sold with all money donated to the National Breast Cancer Foundation

- $305,000 was raised for the National Breast Cancer Foundation

Money was raised in several ways:

- Howie's sold bracelets and tote bags to our customers with 100% of the proceeds donated to NBCF and made donations for every story shared and every "like" on Facebook – this was over $112,000

- Our corporate office and distribution centers made a $20,000 donation each year

- Howie's holds a charity auction each year at our annual convention – this year, it raised nearly $11,000

Why is Love, Hope & Pizza worthy of this award?

With over $1 million raised for the National Breast Cancer Foundation, many women will receive mammograms that they would otherwise not be able to afford. Plus, money donated will be used for research and other awareness initiatives. 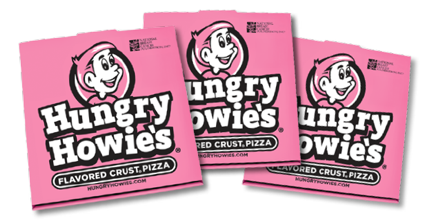 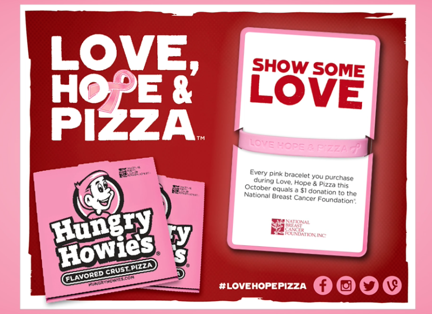 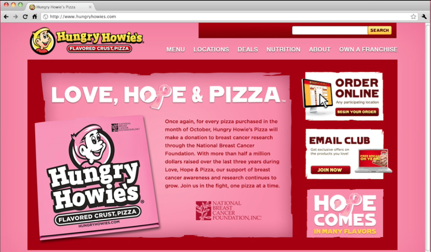 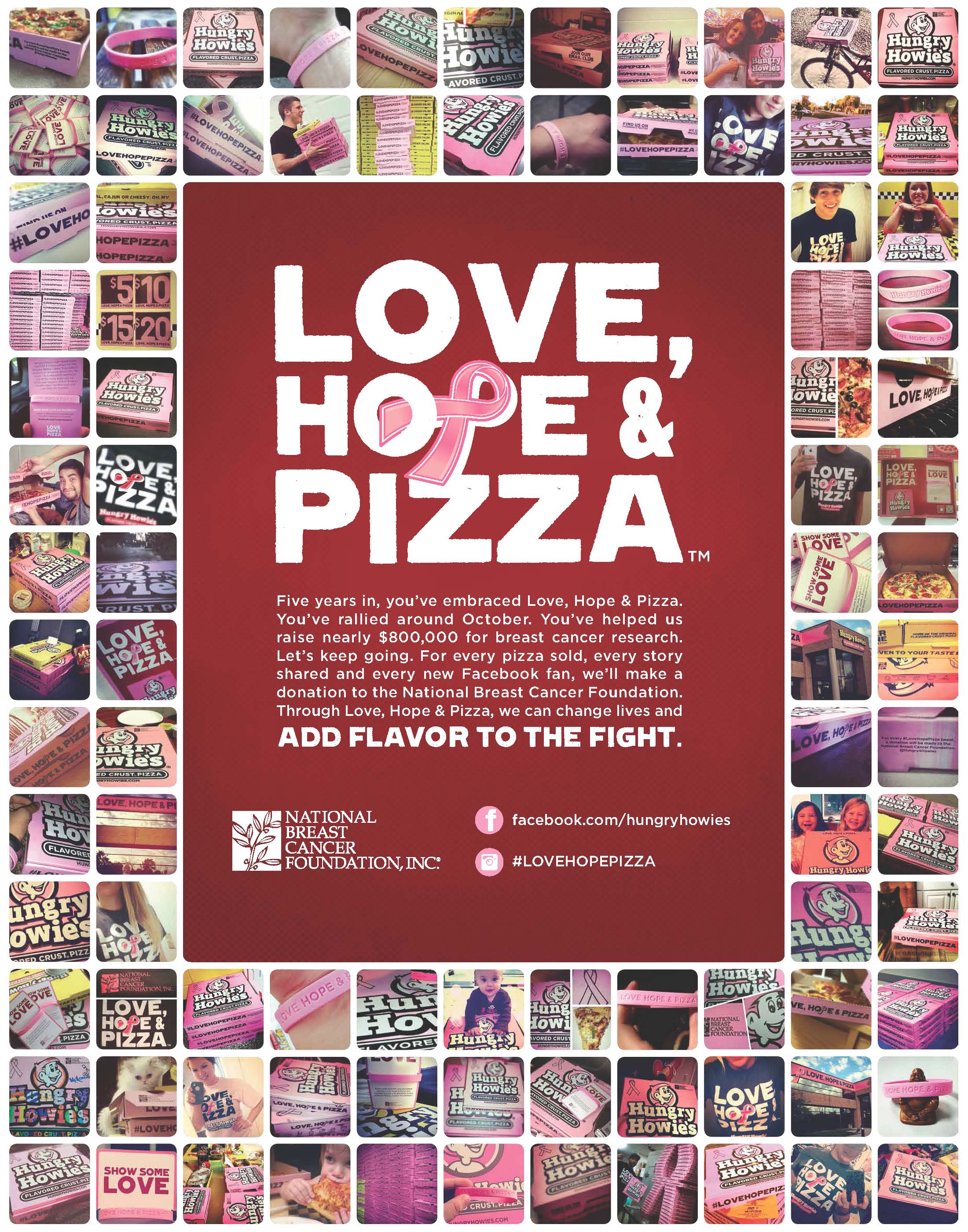