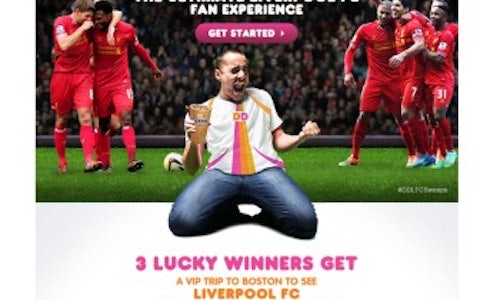 LFC yourself with Dunkin' Donuts

With the LFC pre-season tour travelling to the US in 2014, it was the perfect chance for Dunkin' Donuts and Liverpool FC to highlight their new relationship and create an exciting and engaging digital campaign.

The main objectives of the campaign were to highlight the new relationship between Dunkin' Donuts and Liverpool FC, engage with LFC fans and American fan clubs and to bring awareness to Dunkin' Iced Coffee.

People were driven to a dedicated Facebook tab on Dunkin's page and a dedicated URL for mobile users telling them about the campaign to win 3 x pairs of VIP tickets to watch LFC vs AS Roma play at Fenway Park in Boston.They entered the competition by providing their name, email address, phone number and favourite iced coffee flavour. To gain 5 more entries they could take part in "LFC Yourself" where they were directed to "face-in-hole execution" and could insert their photo into a group photo with LFC players which could then be shared on their own social media and a press release was sent to various American press outlets.

Dunkin's "LFC Yourself" campaign used a simple approach to create a dynamic campaign where people could enter themselves to win a once in a lifetime prize while having fun in the process. Achieving over 144k entries for the competition and 54million impressions of #DDLFCSweeps this simple campaign tapped into the interests of the end user and created content to best suit these and maximise benefit for both LFC and Dunkin' Donuts. Facebook reach was 3.5million and external media coverage was 1.7million in outlets e.g. Fox News, ABC6, Marketwatch. 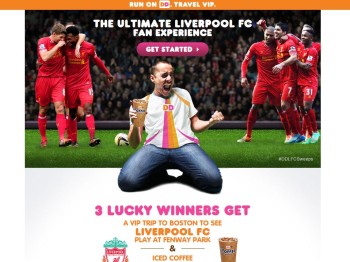