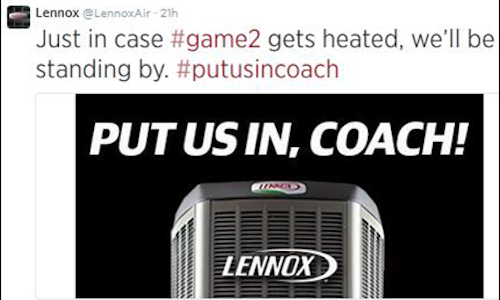 When the air conditioning went out during Game 1 of the NBA finals in San Antonio, it caused an outburst of responses on social media. It's rare when a real-time event arises that a HVAC company can respond to, so Lennox knew immediately they needed to become a part of the conversation. The objective was to create unique social posts on Facebook and Twitter that played off the AC going out as quickly as possible. Immediately the teams at GSD&M collaborated with the Lennox clients to create concepts. Simultaneously, Lennox had to vet through the idea with the commercial team to ensure Lennox was not affiliated in any way with the arena. Game 1 was played on Thursday June 5th and we knew that a response during Game 2, played on Sunday June 8th would be critical. The idea with #PutUsInCoach was to play off of the 'bench' as that reliable team member who can step in at any time and fix the problem. Beyond just creating posts across key social channels we sent a truck down to the stadium adorned with Lennox and #PutUsInCoach to drive further buzz and generate on-site content we could share.

Twitter is the leader when it comes to real-time events so we allocated media dollars behind the tweets in order to expand reach. The result on Twitter was an engagement rate of 4.3%, far exceeding the standard benchmark of 1-3%.

With the growth of social media, real-time marketing has continued to grow in an effort for brands to stay relevant and join in on social conversations. There are certain opportunities that you can plan for, but then there are opportunities that arise and as a marketer you have to ready to act fast. It's important to not insert your brand into a conversation unless there is a clear connection to the event. For an HVAC company, it doesn't happen very often that an event occurs and it makes sense for the brand to get involved. Lennox's opportunity came during Game 1 of the 2014 NBA Playoffs in San Antonio. The AC went out and everyone was talking about it on social media.

GSD&M and Lennox immediately jumped into action crafting a plan for how to respond. It was decided that we would wait until Game 2 so we could confirm that the unit that failed in the stadium was not in fact a Lennox unit. The last thing we wanted to do was respond about the AC going out and then find out Lennox could some way be tied to the failure.

Once it was confirmed it was not a Lennox unit, the teams started brainstorming a plan of action. We knew in order for it to be successful it had to be simple and to the point. There needed to be enough humour to grab people's attention but not over-the-top. The end result played to the fact that Lennox could jump in and help if game 2 got "heated".

Not only did we produce social posts, we also created an on-site activation in record time. We wrapped a truck in Lennox signage with our headline, "Put us in, coach!" and drove it around the stadium prior to Game 2 to garner further attention.

Twitter is the leader when it comes to real-time events making it the perfect platform to promote our posts for additional reach. With a social advertising strategy already in place, we were able to allocate media dollars to this tweet in order to capitalize on additional engagement. The result on Twitter was an engagement rate of 4.3%, far exceeding the standard benchmark of 1-3%. On Facebook, our organic post alone received a 5.37% engagement rate, exceeding the standard benchmark of 3-4%.

This is a winning strategy that was executed quickly and collaboratively. It's rare for a low interest category like heating and cooling equipment to have a shining moment on social everyone is talking about. Lennox stands out against other competitors in the HVAC category because of their leadership in innovation and technology. We look to meet those standards on social media as well. Playing off of the Game 1 a/c problem certainly put us a head of the competition and the extremely high engagement rates prove it. 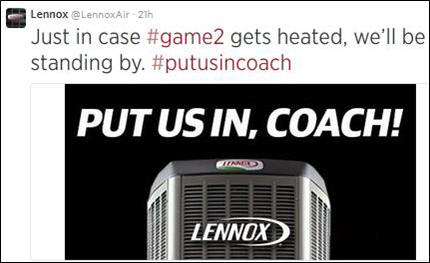 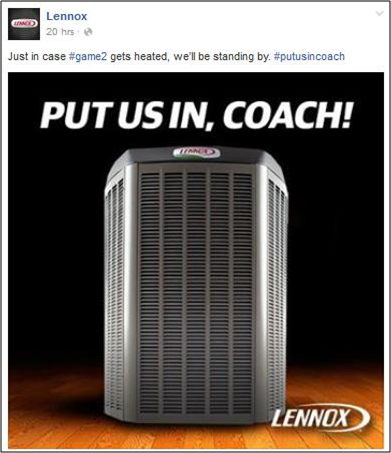 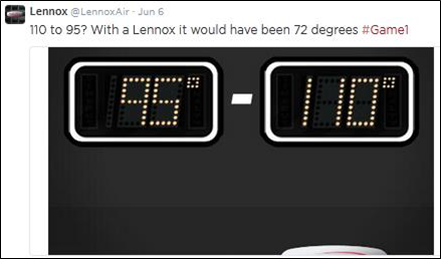 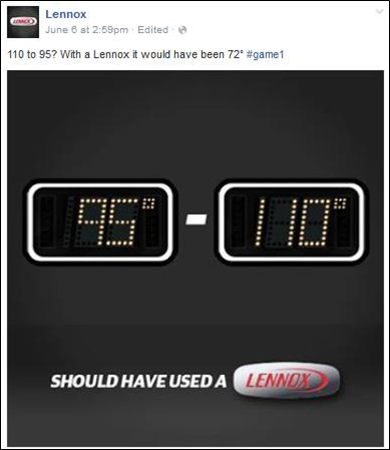