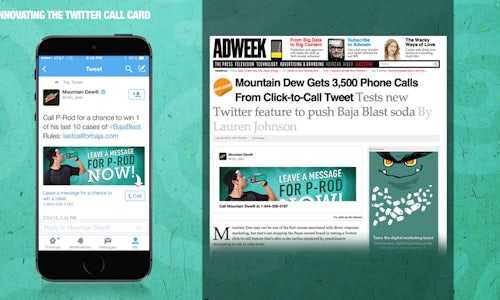 Following its birth as an exclusive Taco Bell flavor in 2004, Mountain Dew Baja Blast quickly became one of the restaurant's most in-demand fountain beverages. For years, DEW listened to pleas from fans, begging that Baja Blast be sold at retail. In 2014, DEW knew it wanted to grant that wish to fans, with a limited time offer that would deliver the drink to fans at scale and reward their devotion.

"Last Call for Baja" leveraged Twitter's call card and one of DEW's most popular athletes, pro skateboarder Paul Rodriguez (P-Rod), to close the LTO with a huge bang. Towards the end of the summer, Mountain Dew leveraged the brand new Twitter Call Card, a click-to-call feature intended for customer service. We reimagined it, using it in a way no one had yet thought of. Clicking on said button automatically called a phone number with a voice recording by P-Rod. To enter to win one of 10 remaining cases of Mountain Dew Baja Blast users left a voice message telling P-Rod why they deserved one of the last beverage cases.

Last Call for Baja had 1,832,968 total impressions and exceeded the CPG industry average engagement rate on Twitter by 150%.

In April 2014, Mountain Dew announced that, for the first time, Mountain Dew Baja Blast, a Taco Bell exclusive for the past decade, would be available for a limited time in bottles and cans. For "Last Call for Baja", Mountain Dew leveraged one of DEW's most popular athletes, pro skateboarder Paul Rodriguez (P-Rod), to stimulate sales and sell out the product during the LTO period.

Our strategy was to engage the fiercely loyal Baja Blast fan base to sell out soda. We would guarantee sell through and create excitement by activating P-Rod fans, amplifying the passion and love that already existed amongst Baja Blast's most vocal fiends.

Towards the end of the summer, Mountain Dew used a brand new Twitter Call Card customer service feature, which we leveraged to facilitate fan access to P-Rod through a click-to-call icon for mobile devices. Clicking on the button dialed a phone number with a voice recording by Paul Rodriguez. The message asked fans WHY they should be awarded one of the final cases of Baja Blast. In DEW world, P-Rod is a god, and fans had direct access to leave a message for their idol, creating a dialogue between icon, fan, and brand.

To enter to win one of 10 remaining cases of the Mountain Dew LTO drink, during the "Last Call for Baja" finale, people left wild and crazy voice messages begging P-Rod, to help them win Mountain Dew Baja Blast. Phone calls had a 94% completion rate with 3,362 voicemails left on 3,568 completed calls. 78% of these voicemails lasted longer than 30 seconds. The influencer take-over made the Mountain Dew Baja Blast launch newsworthy, garnering industry attention in media outlets such as Adweek.

Last Call for Baja had 1,832,968 total impressions and exceeded the CPG industry average engagement rate on Twitter by 150%. 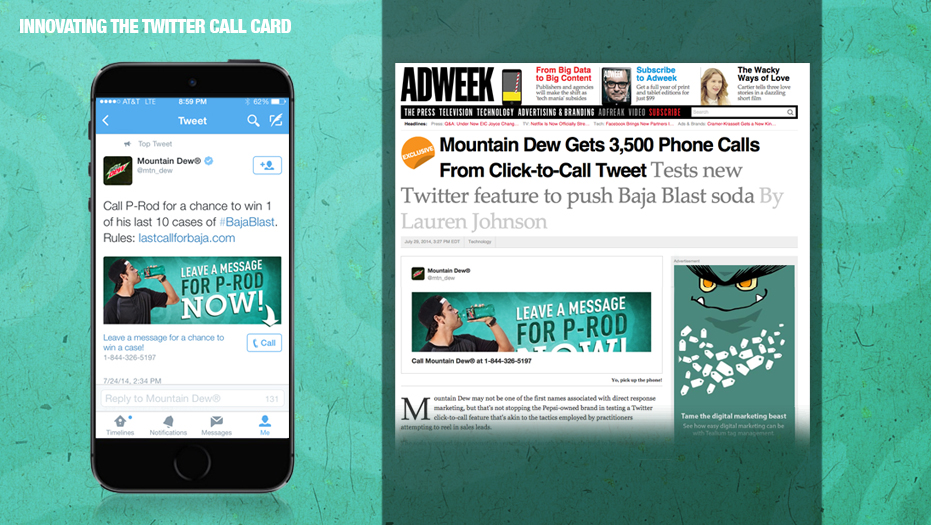