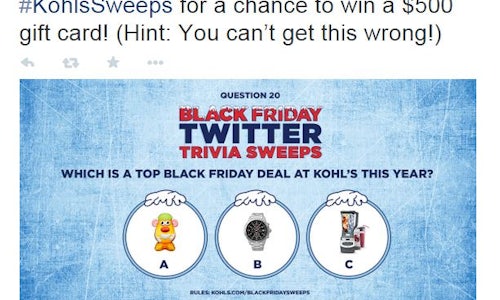 Kohl's is the second-largest department store chain in America. Despite their success and position in the market, Kohl's faces competition to drive shoppers to the store during the busiest retail day of the year: Black Friday.

To capture and hold shoppers' attention during Black Friday, Kohl's, with the help of Weber Shandwick, developed a two-pronged social media strategy. First, Kohl's would entice consumers with a trivia contest offering incentives. Second, they would reach out to consumers at a personal level, engaging with them in the act of shopping.

A week before Black Friday, Kohl's was able to get a jump on social conversations by leveraging their sponsorship with Disney's Frozen and the American Music Awards. Kohl's Black Friday discussions began immediately after the last American Music Award was handed out, and the contest's first trivia question, focusing on the AMAs, was posted the following morning. Kohl's also maximized their tie-in with Disney's mega-film, "Frozen," a partnership solidified since August of 2014. This months-long partnership placed Kohl's at the heart of the Frozen conversation. The strategy of leveraging these mega-partners, dominating the conversation by intersections, and the volume of fresh content helped Kohl's reach its objectives.

The campaign was a success. Engagement with consumers made Kohl's a top brand in the overall Black Friday conversation, gaining over 450K total engagements (up 400% from 2013). During Black Friday week, the campaign hashtag consistently made Twitter's Trending Topics list; during the biggest shopping days, Kohl's drove 64% of brand mentions on Twitter.

Based on the success of past campaigns, Kohl's knew their followers would be drawn to a high-reward campaign. So, a strategy was developed that linked Kohl's to two successful, culturally relevant entities: Disney's "Frozen" and the American Music Awards. This one-two punch gave Kohl's a significant advantage from the start.

The social strategy was to not only get consumers to participate in the contest, but also for Kohl's to engage in conversation with potential shoppers and top-line social influencers, helping dominate the social conversation surrounding the holiday and making Kohl's a go-to source for all things Black Friday.

Kohl's leveraged their sponsorship with the American Music Awards to air a Black Friday teaser commercial immediately following the primetime broadcast on ABC, piquing interest in the retailer's sweepstakes and other Black Friday efforts from the start. The next day, Kohl's activated a week-long Twitter-focused engagement initiative, including social listening and a Twitter contest (#KohlsSweeps), allowing participants to win gift cards for correctly answering a variety of trivia questions.

Each day of the week leading to Black Friday, different trivia questions were asked, keeping content fresh. "Heads-up" tweets prepared followers for upcoming questions and encouraged people to watch for further opportunities to enter, building momentum. This cadence kept the contest top-of-mind for followers, making them eager to participate. To be eligible to win, followers were required to use the hashtags #BlackFriday and #KohlsSweeps when answering. Because Kohl's required interaction with contest content, overall engagement was increased on the page; additionally, consumers were more likely to engage further by browsing Kohl's Twitter feed.

The first trivia question capitalized on the excitement still bubbling over from the previous night's AMA broadcast, which quickly placed #KohlsSweeps among Twitter's trending topics list, setting Kohl's up for success early in the week. Other questions focused on Disney's mega-film "Frozen", and since Kohl's had already established themselves as a go-to retailer for all things Frozen, this also helped promote Kohl's partnership with the film and merchandise available in the store. Additional trivia questions focused on holiday themes and other hot items available at Kohl's, again helping to drive sales.

During peak Black Friday hours (late into Thanksgiving evening/early Black Friday morning), Kohl's maintained a prominent social presence not only by publishing contest content every 15 minutes, but by also intersecting relevant conversations from influencers and everyday shoppers. The retailer, in conjunction with the Weber Shandwick team, constantly monitored for trending topics and conversations to intersect. One example included Detroit Lions linebacker Kyle Van Noy (23.7K Twitter followers), who asked his followers where the best Black Friday deals were. Kohl's intercepted the tweet, sending Van Noy to their Black Friday deals; the pro-footballer played along, and as a result, Van Noy's followers also began to join the Kohl's Black Friday conversation.

Overall, Kohl's saw a 234% shift in percentage of positive sentiment during Black Friday week, gained over 11K new fans across social platforms, and generated over 370K Twitter mentions, resulting in over 255MM potential impressions. The retailer surpassed 2013 results by 400%, with 450K total engagements received on Twitter during the campaign timeframe (inclusive of paid content). On Twitter, the engagement rate grew 35% from 11/24-11/27, as excitement and awareness for the contest continued to build.

Kohl's also drove 64% of brand mentions during Black Friday week on the big shopping days. Compared to competitors, Kohl's had a 39% share of voice, which placed the retailer at the top of its competitive set for the month of November. According to Twitter's Trending Topics list, #KohlsSweeps was a consistent trending topic on Twitter in the United States during Black Friday. Following the major retail holiday, Kohl's was recognized as the top social brand in the overall Black Friday conversation by The Wall Street Journal's CMO Today. 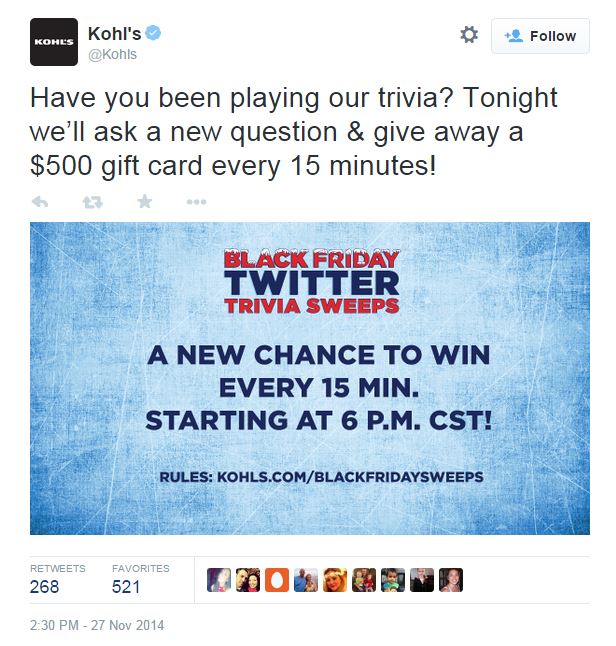 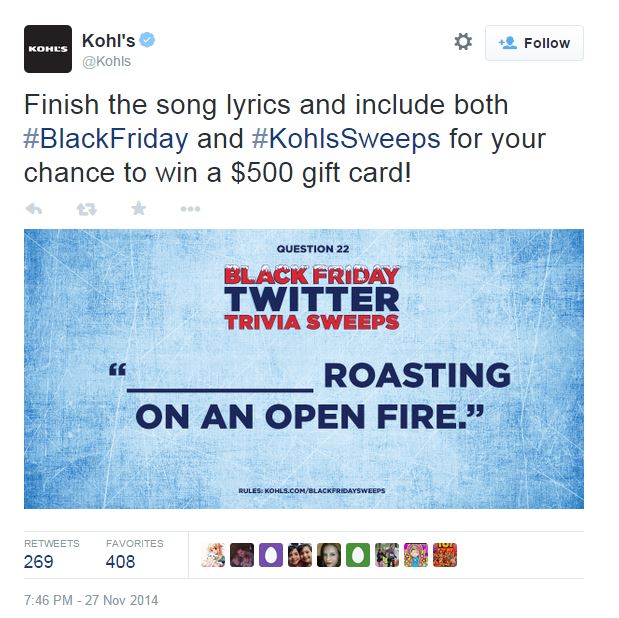 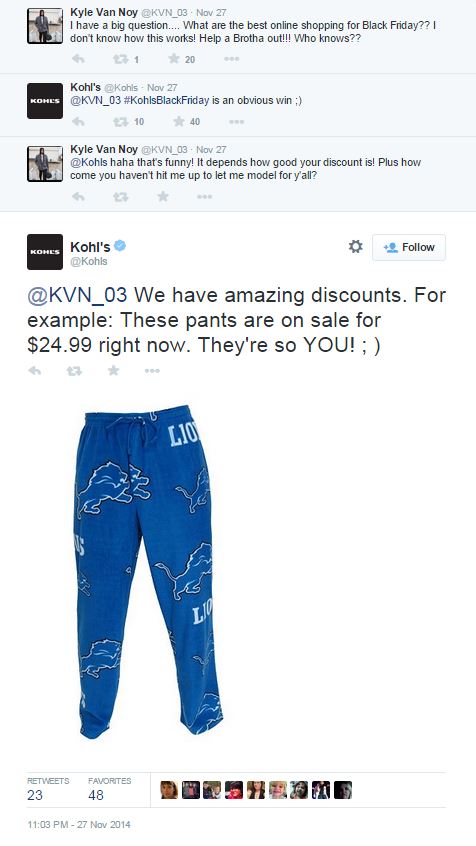 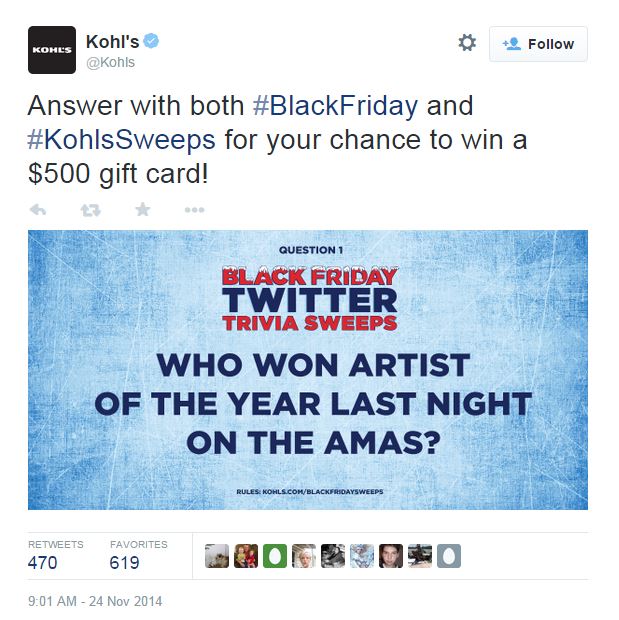 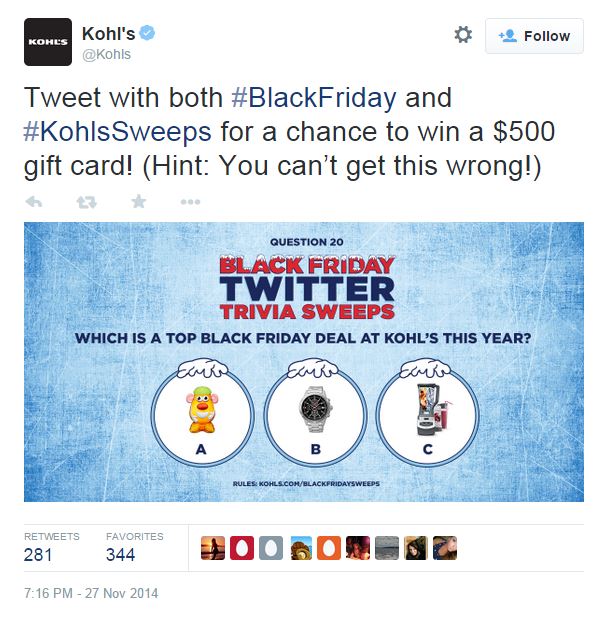