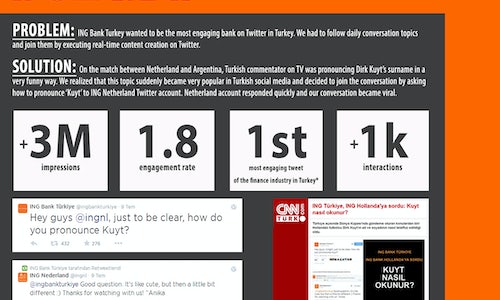 ING Bank How to pronounce Kuyt?

ING Bank Turkey is trying to achieve communication excellence on social media. For that purpose, we had to join in the online social conversation in Turkey. During the World Cup, we decided to become a part of the conversation. We positioned our brand in line with the Netherlands national team and produced unique content. We watched all the games, and listened what has been talked from the first day. During the semi-final game between The Netherlands and Argentina, we realized that, people were talking about the Turkish commentator on TV who was pronouncing a Dutch footballer's name (Dirk Kuyt's) in a very funny way. We decided to tap into that conversation using our brand's Dutch origins. We sent a tweet to ING's Netherlands account to ask them how to pronounce Kuyt. Within 30 minutes, we got a reply. This conversation became viral and without any investment got more than 3.1 million impressions. Various digital media platforms and even national media channels like CNN Turk, Radikal etc. gave this conversation as news on their websites. We got more than $90.000 worth of PR coverage without making any media investment.

Real time content creation on social media is a very hot topic today. Every brand is trying to become a part of the social conversation by catching the popular trends on social media. We knew the World Cup was going to be one of the hottest topics on social media and create tons of conversations. We thought this would be a good opportunity to create real time content and increase ING Bank Turkey's brand awareness by using World Cup's popularity. However; every brand could be talking about popular events, we had to find a way to talk about World Cup in a relevant fashion to ING Bank Turkey.

Turkey's social media conversation generally has a nationalistic tone. If a brand does not support Turkey's National teams, they don't declare who they support. Since the Turkish National Football Team could not attend the World Cup, we decided to take a bold step and announced 'We wish Turkish team were there, but since not; we'll be supporting The Netherlands National Team'. Taking a side like that was a risky move especially for a bank. After this huge step forward, we started to listen social media and waited to find an opportunity to join the conversation. We found our opportunity on the semi-finals match between the Netherlands and Argentina; Turkish TV commentator was pronouncing Dirk Kuyt's name in a very funny way.

Since from the start of the World Cup, we listened social media and the World Cup conversation. We positioned our brand in line with the Netherlands national team and produced unique content. Our 24/7 listening provided us the perfect chance. After people started talking about how Kuyt's name pronounced on the TV, there was a unique opportunity to join the conversation. Since no one can know better than a Dutch native how to pronounce a Dutchman's name, we decided to ask ING Bank Netherlands account how to pronounce Dirk Kuyt's name. We asked; "Hey guys @ingnl, just to be clear, how do you pronounce Kuyt?" Within 30 minutes, we got a reply saying; "@ingbankturkiye Good question. It's like cute, but then a bit different :) Thanks for watching with us! Anita." This conversation became viral among Turkish social media and thousands of people started to talk about our tweet.

Our conversation got more than 3.1 million impressions and became the number one tweet among finance industry in Turkey in terms of engagement rate (in the first half of 2014, according to the SocialBakers data). Various digital and social media platforms gave this conversation as news on their websites and even national media channels like CNN Turk, Radikal etc. made a story about this phenomenon. We got more than $90.000 worth of PR coverage without making any media investment and achieved this organic reach just with the quality of our content.

Video for ING Bank How to pronounce Kuyt? 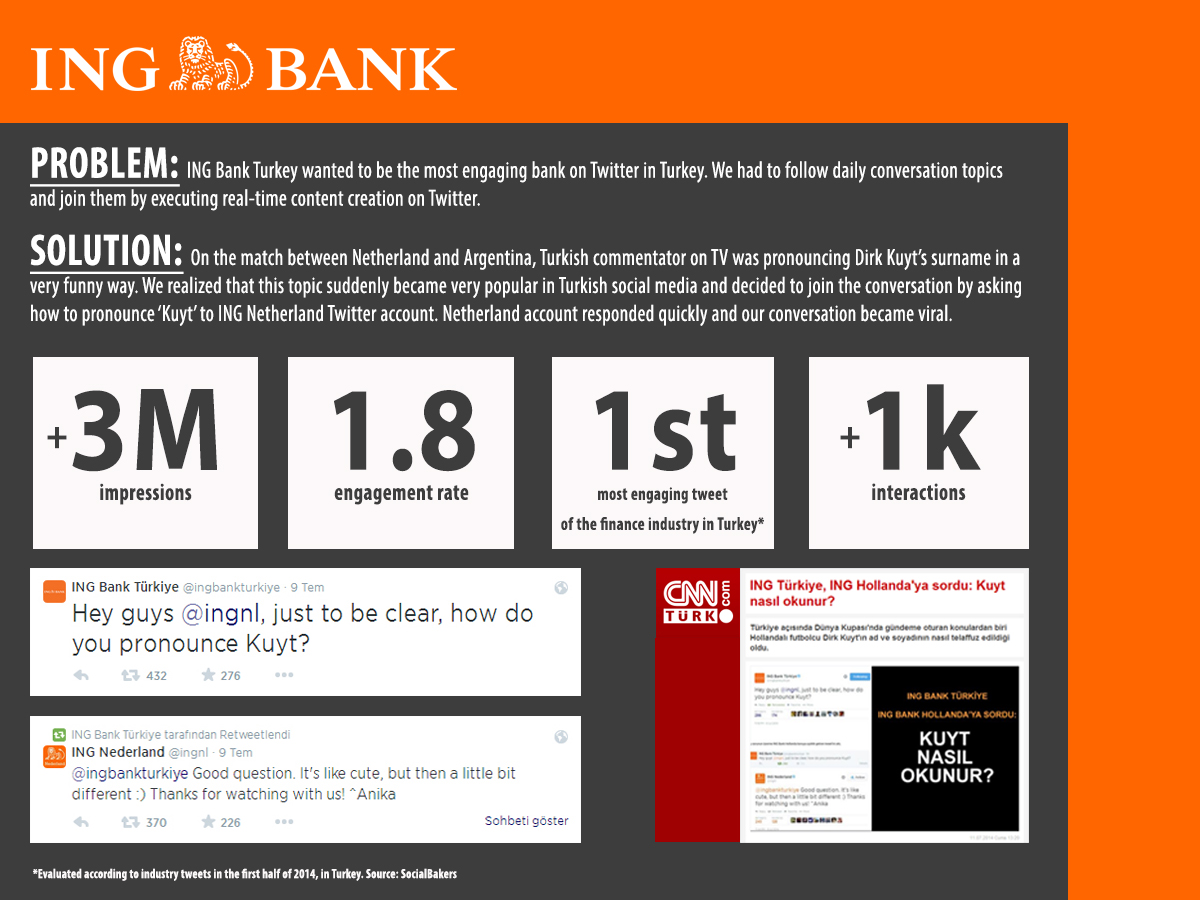