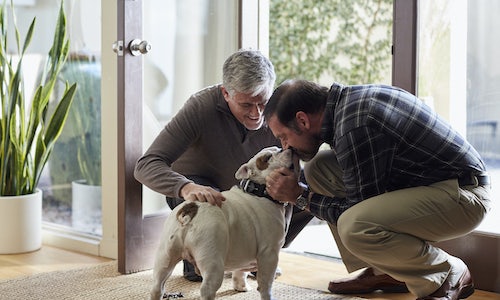 Coldwell Banker Real Estate has been helping people find their home for over 108 years. This year in conjunction with their newest commercial, "Home's Best Friend," they've launched a partnership with Adopt-a-Pet.com, in which they have committed to helping 20,000 dogs find homes through the Coldwell Banker Homes for Dogs Project. Coldwell Banker is leveraging an audience of 37 million viewers during the Academy Awards to kick off this initiative, following an online soft launch on February 11, 2015. In under a week, the campaign had over 2.5 million video views and over 1,000 media placements including Mashable, Ad Age, Realtor Magazine, Inman News, and many others. Coldwell Banker has the ability to amplify the commercial's message for social good through their global network of over 87,000 agents and their partnership with Adopt-a-Pet.com. On the night of the Academy Awards. Coldwell Banker hosted a Twitter party co-hosted by Adopt-a-Pet.com, which in turn caused the #HomeRocks hashtag featured in the commercial to trend prior to the beginning of the show and continue until the end of the night. Because of these efforts, Coldwell Banker was recognized as the social media winner of the Academy Awards as the #1 brand on Facebook and 3rd on Twitter that night. Last but not least, we had two team members attend the Academy Awards to cover the commercial launch live from the red carpet (photos below).

Humans like to go into the world to do our exploring. We venture to work or school or just an outing. As we depart from our homes, we leave more than just the house behind, but often times much of what makes that place a home – our dogs.

Last year in the Coldwell Banker ad called, "Home Sweet Home," we shared that feeling we all get when we're on our way home. You know that feeling you get when you walk through the door, kick off your shoes and you can just relax because you're home.

But what we didn't show you is what was going on while you were gone and who was waiting for you on the other side of the door. This year, we're taking a look at things from the view of man's best friend who anxiously awaits the arrival of their human home owners and the excitement they experience as soon as you walk through the door.

No pet reacts quite like a canine when you come back home. Our new commercial, "Home's Best Friend" celebrates home and the role that dogs play in making our home lives wonderful, but we want to be more than a company that makes good commercials. We want to be an organization that does good things. So we've created the Coldwell Banker Homes for Dogs Project. The goal of the project is to find homes for 20,000 dogs this year by working with Adopt-A-Pet.com, the largest pet adoption website in North America. We will be working to promote this cause on our national website at coldwellbanker.com/dogs, through our social media channels and a nationwide PR campaign.

Dogs are not people, but there's no doubt that they're part of the family and what makes a house a home.

Our partnership with Adopt-a-Pet.com has allowed us to open the door to social good in a way that we haven't used before. We are using dogs in our commercial on a much different level than we're used to seeing in the media. "Home's Best Friend" is not simply a commercial about people coming home to cute puppies. We're using animals in the commercial to help make a difference in the lives of homeless dogs everywhere.

The dogs featured in the commercial are very special, as some of them are rescues and have incredible "rags to riches" stories. We featured these heart-wrenching stories in individual blog posts and a video called "Meet the Stars of Home's Best Friend", explaining what these dogs' lives were like before finding loving families and their forever homes. In addition to the launch of the commercial, Coldwell Banker filmed two videos while in Hollywood for the 87th Academy Awards. The first was filmed at a local animal shelter with Adopt-a-Pet.com to discuss the Homes for Dogs Project and how our brand will be making a difference in the lives of adoptable dogs and the homes they will be entering. The second video is a "reunion" of the incredible dogs featured in the commercial.

Here are some social stats for the weekend of the Academy Awards: 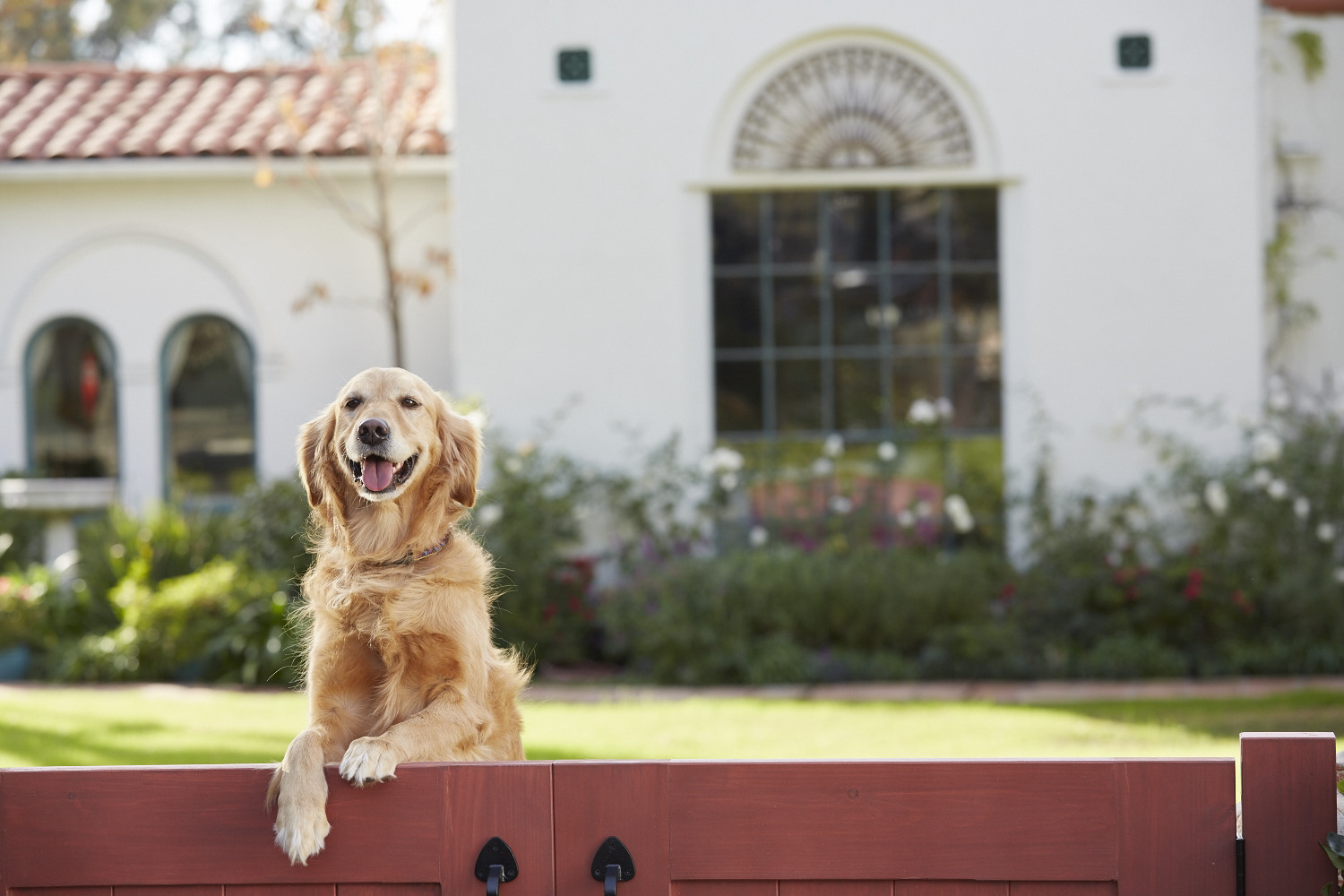 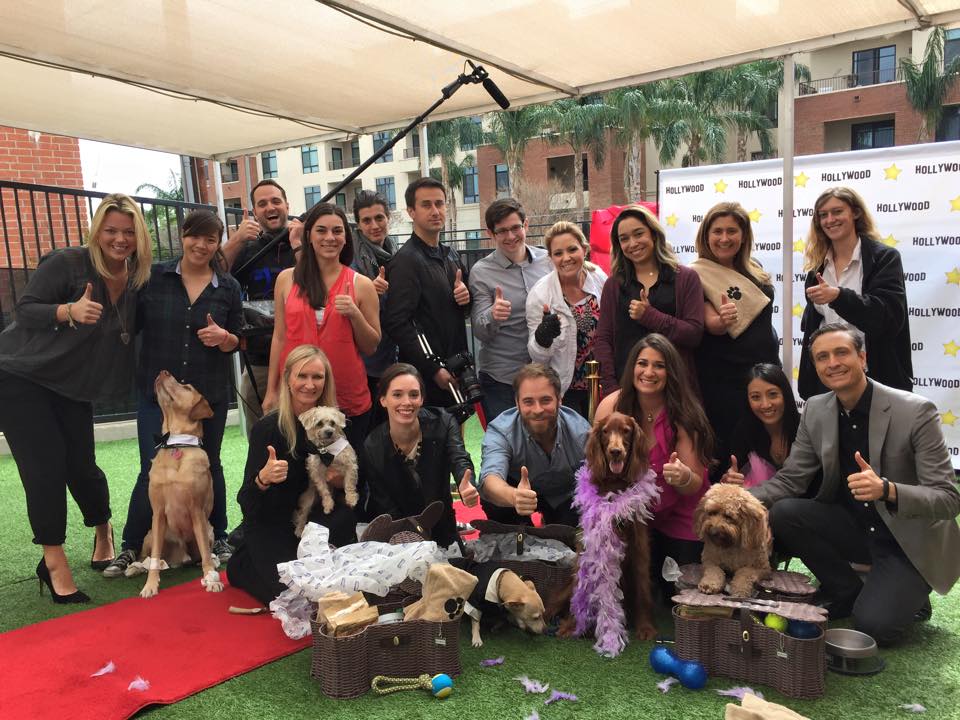 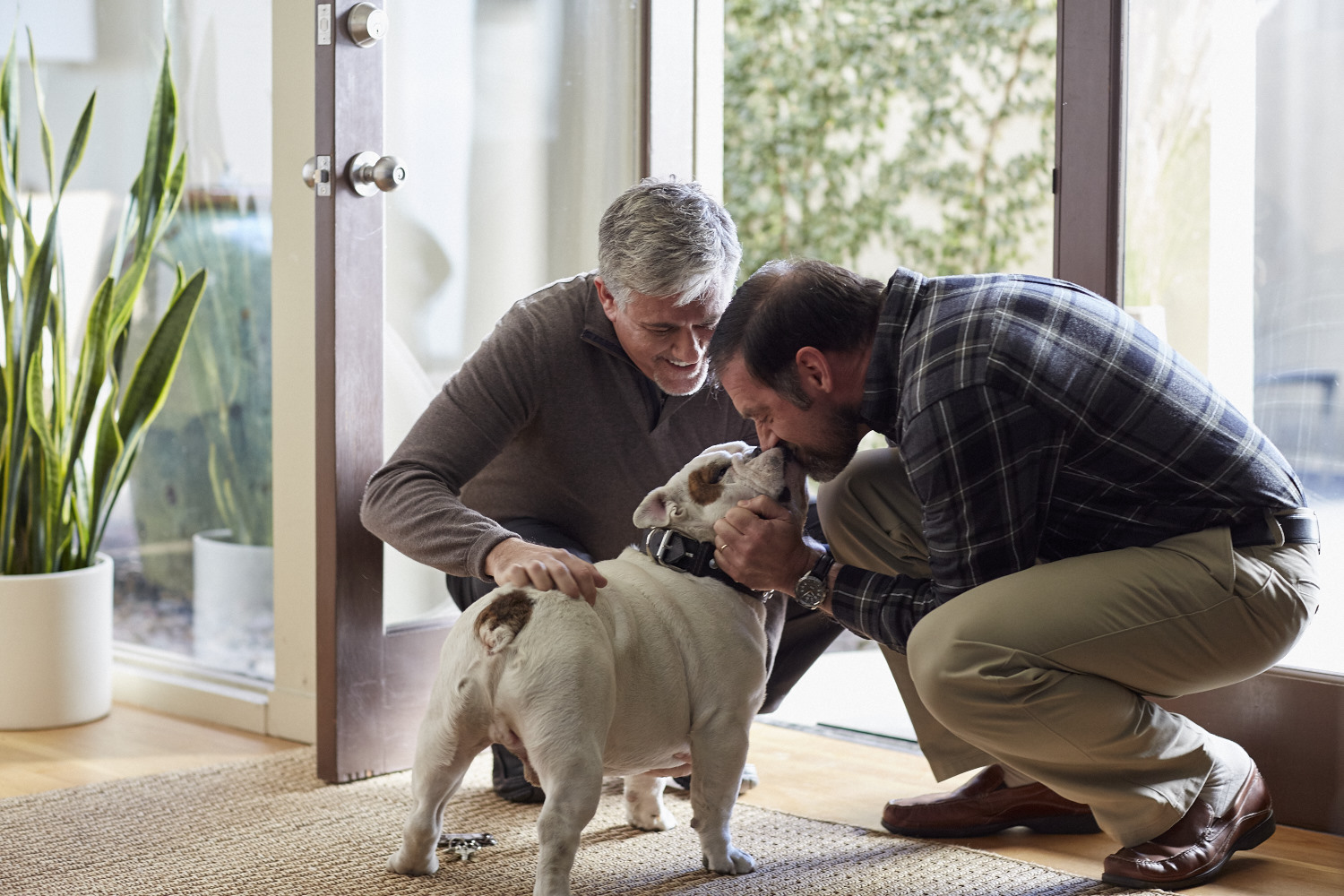 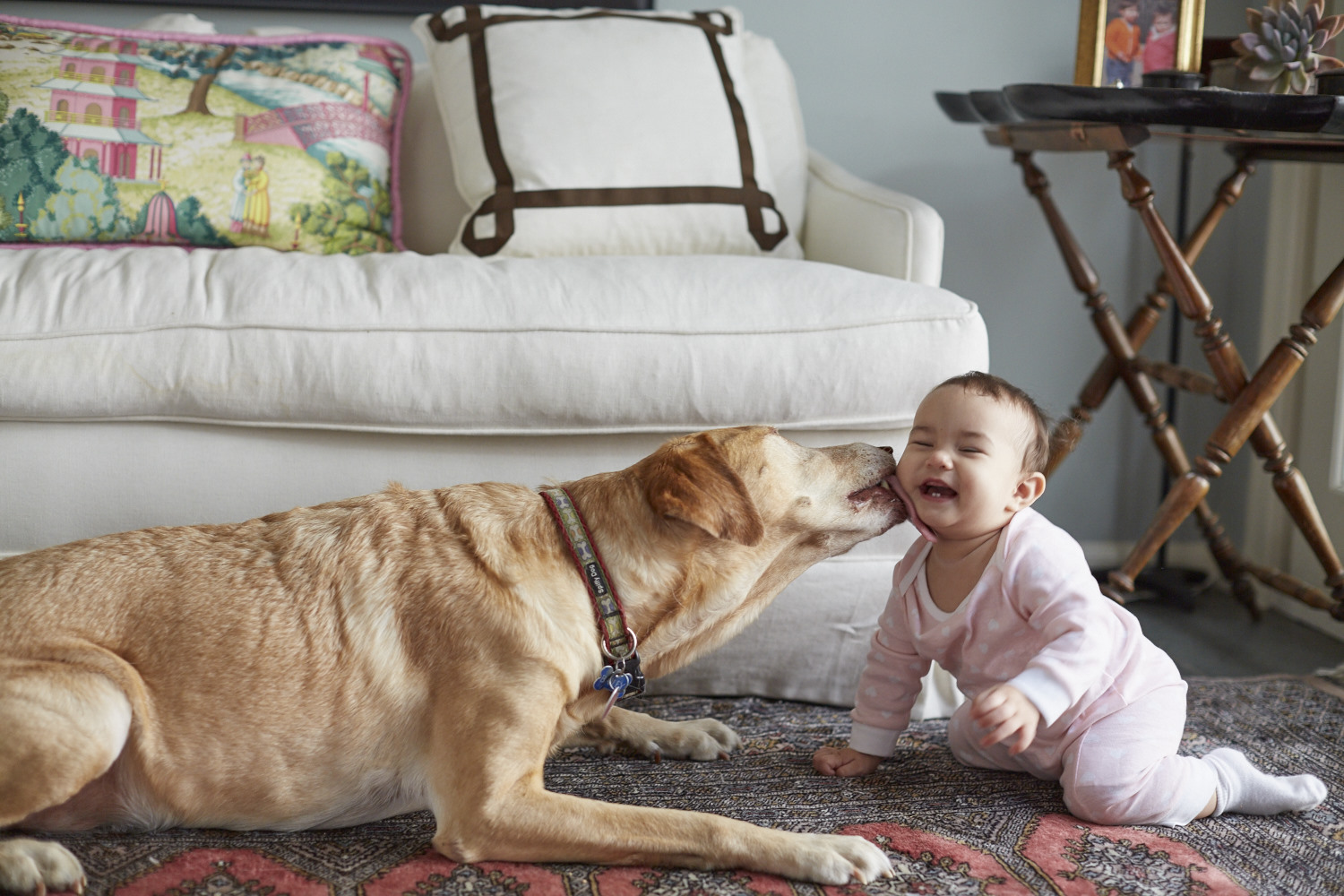 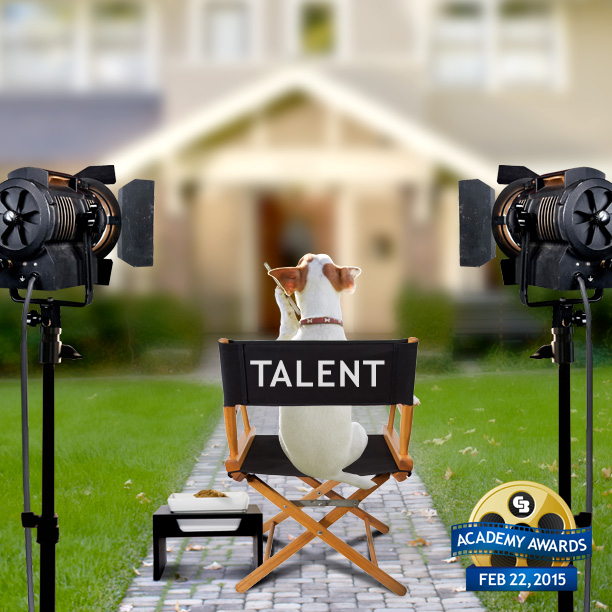 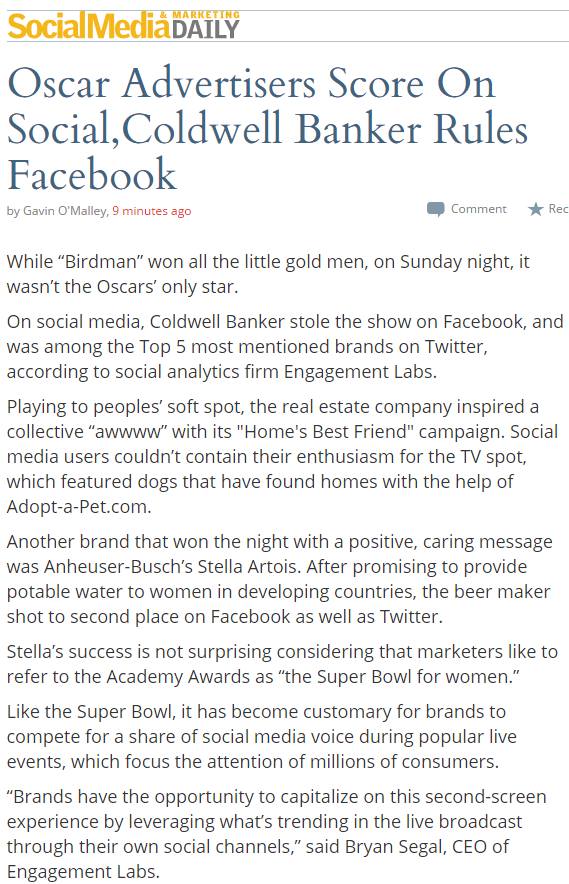 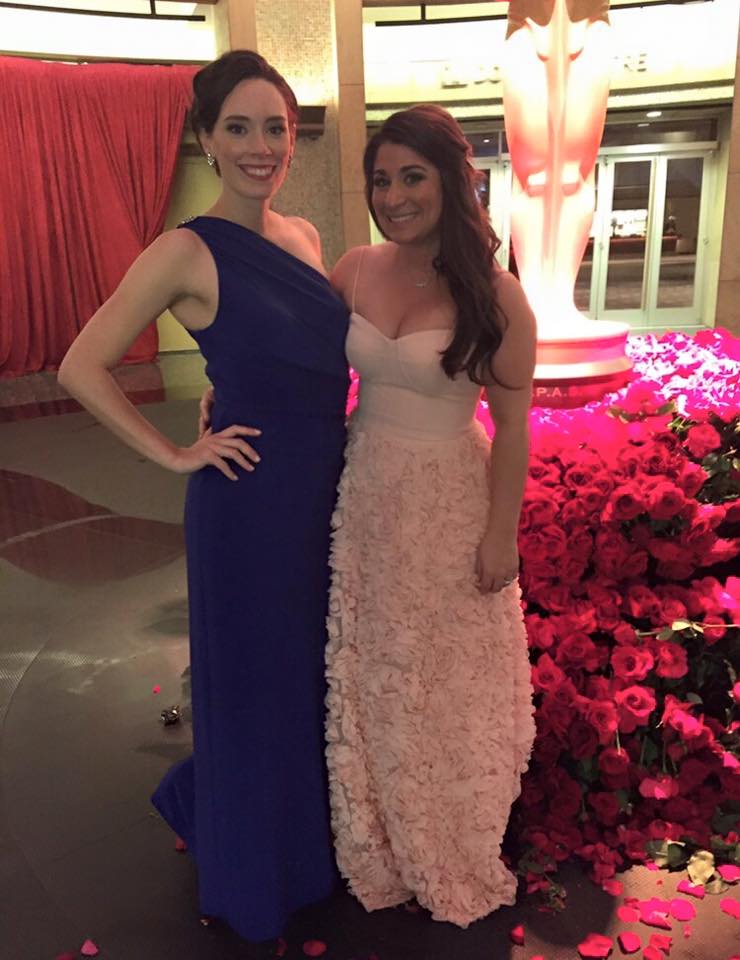 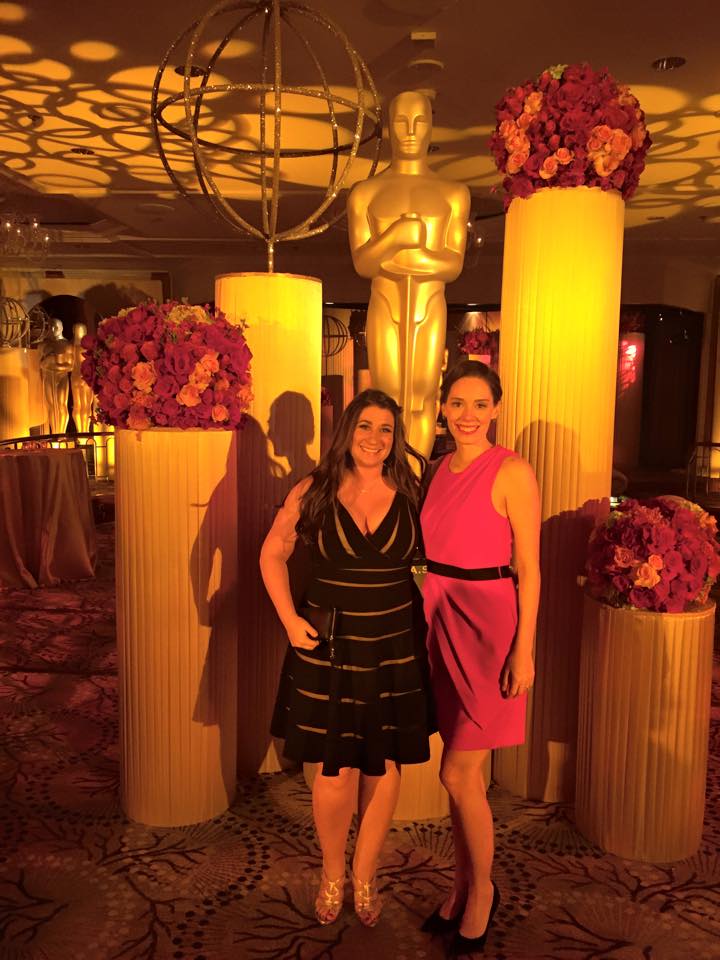