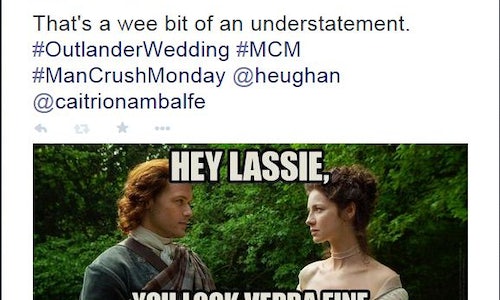 “Hey Girl" is out - “Hey Lassie" is in! STARZ launches meme campaign for Outlander

"Hey Girl" is out - "Hey Lassie" is in! To drive ongoing in-season social buzz for its new show Outlander, STARZ created its own Scottish-themed version of the wildly popular Ryan Gosling "Hey Girl" meme featuring the show's heartthrob, Jamie Fraser. A new meme related to the storyline was posted each Monday after the new episode aired. If Jamie gave Claire (his "lassie") a ride on a horse, the meme would be "Hey Lassie, wanna go for a ride?" When Claire treated wounds on Jamie's back, the meme became was "Hey Lassie, want to treat my wounds while I' m shirtless?"

"Hey Lassie" was the perfect fit for Outlander's female audience, as they had long had love affairs with Jamie's character since they had read the book series. "Hey Lassie" helped extend their connection with the book character to the TV screen, and also inspired the custom memes and social content they were already posting.

Not only did the team capitalize on an existing meme trend, but it also paired "Hey Lassie" with the popular #ManCrushMonday hashtag trend on Twitter and Instagram to extend reach. The result was the campaign generating higher engagements than average on all of Outlander's platforms, including Facebook (+147%), Twitter (+95%) and Instagram (+33%). Read on below for more highlights.

For several years, Ryan Gosling has captured the hearts of women everywhere in his movies as well as the digital space. His suaveness inspired a series of memes featuring pick-up lines that only he could pull off, as long as it began with "Hey Girl." While Gosling wasn't a part of the Outlander cast, the STARZ digital team did have another heartthrob to utilize in its ongoing social marketing of the show.

His name was Jamie Fraser. Jamie had long been the fictional love affair of many women who were avid fans of the Outlander book series, as his strapping good looks, gentle spirit and undying love for his wife Claire had given them the picture of the ideal man. Now that Jamie was coming to life on screen, a highly-snackable visual representation of the character could be leveraged to deepen the romance even further.

Another part of Jamie's attractiveness is his Scottish-ness – his accent and vocabulary, the kilts he wore and his fiery red hair. One of his pet names for Claire was "lassie," a Scottish way of saying "girl." This gave the STARZ team an opportunity to capitalize through a custom Scottish-themed version of "Hey Girl" – "Hey Lassie."

Gosling was replaced with Jamie, who began to speak to lassies everywhere who were dying to hear from the Highlander of their dreams. The team identified the most swoon-worthy images of Jamie to pair with customized pick-up lines relating to key moments and themes from each episode. The memes were also paired with #ManCrushMonday for additional reach and exposure.

The clever spin on "Hey Girl" was a huge success within the Outlander community, as the eight custom memes created for the first half of Season 1....

Inspired Facebook profiles and Twitter handles dedicated to creating Outlander memes such as Outlander Memes (1,613 Likes), Outlander Pick Up Lines (2,337 Likes) and @OutlandishMemes (2,891 followers) as well as the hashtag #OutlanderPickupLines

As the fans started putting their own spin on the "Hey Lassie" memes, we aggregated it via social feeds on OutlanderCommunity.com for all fans to browse.

See the meme examples for yourself in the links section and prepare to fall in love with Jamie Fraser over and over again. 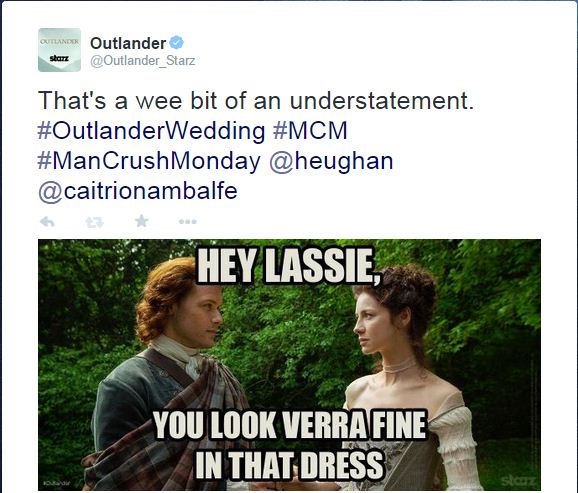 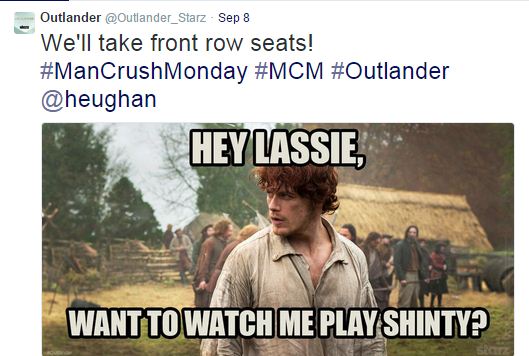 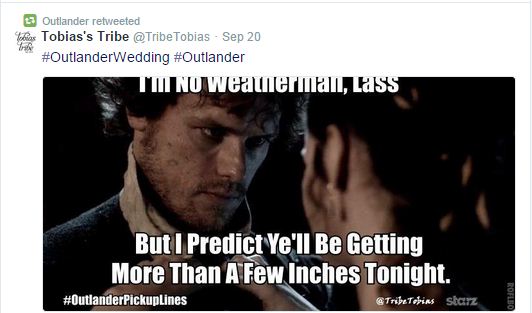 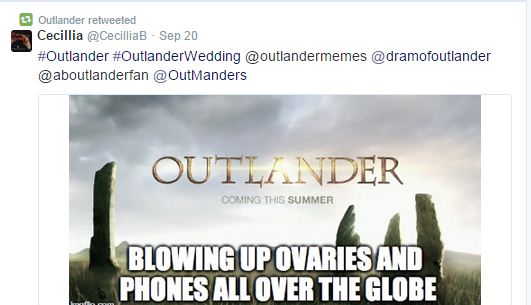 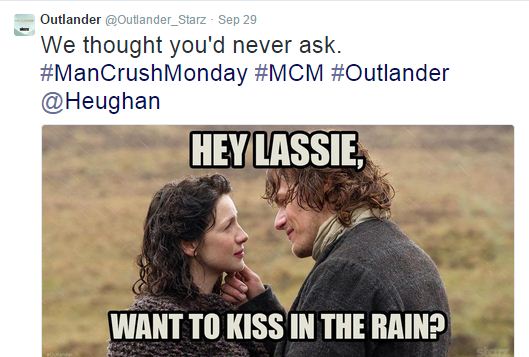