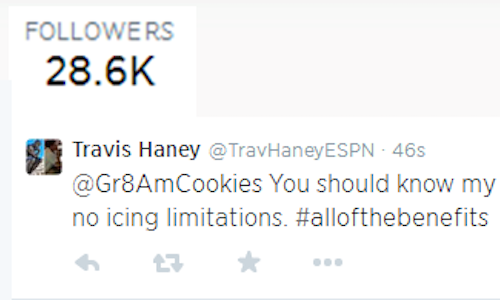 In early August 2014, a story broke that the University of South Carolina self-reported an infraction involving "impermissible icing" on Cookie Cakes given to football recruits at the school. The university was fearful its decorative messages to prospective players would be seen as an NCAA® violation. Sports media jumped on the story, and reporters didn't waste time commenting on the frivolity of the situation. Shortly after, the NCAA issued a statement saying the sugary offense was no violation at all.

With this glorious victory for Cookie Cakes, there was no better time for MGH to help make client Great American Cookies part of the week's headlines. MGH first whipped up a press release applauding the NCAA for its ruling in favor of iced messages.

Next, to make the announcement even more media-friendly, MGH coordinated the delivery of a dozen Great American Cookies Cookie Cakes to the NCAA President and hired a photographer to capture the stunt.

To seal the deal, MGH reached out to sports reporters and local TV stations via Twitter with the delivery images. Numerous outlets shared the images and the news release via their social media accounts as a follow up to the original story. As MGH had hoped, Great American Cookies became the talk of the sports and sweets worlds.

It's not often that Cookie Cakes are headline news, so it was paramount for MGH to take advantage of this high profile story with a well-timed push that would put the name "Great American Cookies" front and center. The overall goal was to get added positive publicity for the Cookie Cake maker and to show consumers just how valuable those iced messages truly are on Cookie Cakes. After all, a Cookie Cake without a message is just a cookie.

Once MGH learned of the Cookie Cake story, its social media and PR teams reached out to the client with a plan on how the company could join the conversation and generate positive press for itself without negatively calling out the NCAA. MGH developed a press release applauding the NCAA for allowing colleges to spread cheer to recruits with iced messages on Cookie Cakes. Behind the scenes, MGHers went to work building media lists comprised of top, active sports reporters on Twitter. As a final layer to this rapid response campaign, MGH worked with Great American Cookies to deliver a dozen 'Thank You' Cookie Cakes to the NCAA President in Indianapolis. Knowing that pictures are everything in this day and age of social media, MGH hired a photographer to capture the entire delivery and received the high-res images the same day.

Once the Cookie Cake delivery was complete, MGH went to work pitching reporters via Twitter, specifically sports reporters and local TV sports reporters in South Carolina and Indianapolis where the news topic was most prominent. Along with the pitch, MGH sent the press release and delivered photos over a national wire service for added exposure. As MGH had hoped, the buzz started to build in stories online and on Twitter, and Great American Cookies' Cookie Cake delivery to the NCAA president quickly became a hot topic that afternoon and evening. As word continued to spread about the delivery, Great American Cookies made some special, one-off Cookie Cake deliveries to ESPN reporters and local TV sports reporters who said they supported the company's fun-spirited outreach.

No matter how unique your client's service or product is, when it captures headline news, you have to act fast to capitalize on it, which is exactly what MGH did for Great American Cookies. Due to MGH's quick planning and the right combination of PR and social media elements, news outlets from Yahoo! Sports to SB Nation reported on Great American Cookies that week. And the well-timed gesture had sports and news reporters buzzing all over social media.

On Twitter, several of the biggest names in the sports industry were buzzing, including ESPN recruiting analyst, Tom VanHaaran; popular ESPN sports reporter, Chantel Jennings; a Tweet from the South Carolina Gamecocks site, Garnet and Black Attack; Fox WACH-TV (Columbia, South Carolina) Sports Anchor, Brian McConchie; and The State's University of South Carolina writer, Josh Kendall. This was only a small portion of those on Twitter who commented on the delivery.

Without a doubt, the best Tweet came from Fox WACH-TV sports reporter, Derek Phillips, who said via Twitter: @Gr8AmCookies I will be buying cookies from you soon for this. That's exactly the good-natured buzz that MGH was hoping to create for Great American Cookies through this quick response PR campaign.

Why we should win

Cookie Cakes rarely make headline news, but when they did, MGH was ready to roll out all the stops to help get the sweet treat company some positive news coverage. 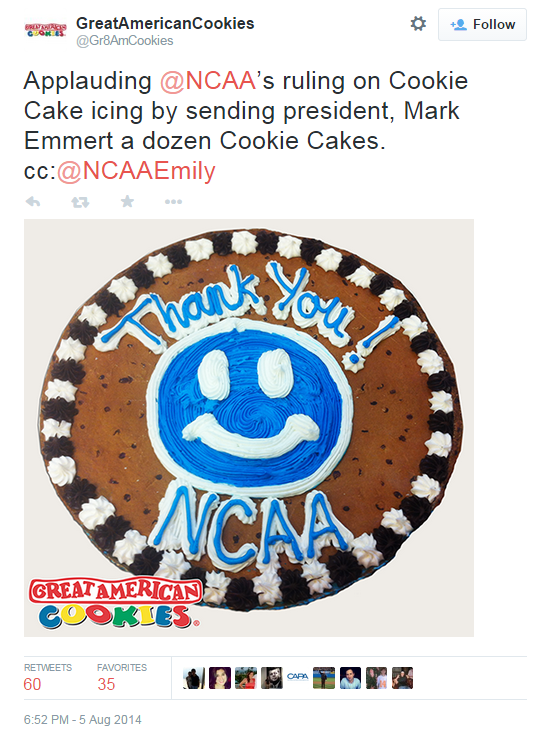