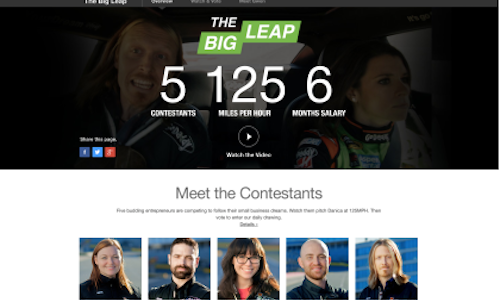 GoDaddy is a leading technology company dedicated to empowering individuals to start and successfully run their own small businesses, although they were mostly known for their racy Super Bowl ads. They wished to transform their brand perception and engaged HYFN to help with their 2014 Super Bowl campaign. GoDaddy's new approach was about how they help their customers succeed rather than past "shock and awe" tactics. Our job was to develop and execute an effective campaign that would incite conversation, heighten brand sentiment, and maximize engagement.

The Big Leap put five entrepreneurs to the test for a chance to win six months' salary by quitting their job and pursuing their dream; however, they had to pitch their idea to spokesperson Danica Patrick in a race car going over 125MPH. We produced videos showcasing their pitch along with hundreds of assets to promote the campaign across digital channels. We used real-time Facebook and Twitter ad buying to drive engagement, built a contestant site integrated with GoDaddy.com where visitors could vote for their favorite.

In 30 days, HYFN drove 57,000,000+ impressions with strategic media, engaging social content, and worked with contestants to generate content and promote themselves. HYFN employed real-time social ad buying and promoted content. With a CPM of $1.40, The Big Leap campaign was 24x more efficient than GoDaddy's Super Bowl commercial while driving 650,000+ social engagements. We monitored social media posts, communities, and blog posts, which showed a 600% increase in positive sentiment posts versus the previous Super Bowl.

HYFN repositioned GoDaddy's TV in a way that allowed the brand to maintain its edge, speak inclusively to the customer base, link its two large media buys (Super Bowl and NASCAR season), and demonstrated the value proposition of "helping small businesses kick ass digitally." It drove massive cross-platform engagement, and for the first time in a long time brought the kind of positive publicity and sentiment that the brand wanted.

With only $100k for production and $82k for social media, every dollar counted. We were able to drive a cost of $0.14 per engagement. In total, the campaign was over 20x more effective in driving social engagement compared to past Super Bowl campaigns. The Big Leap campaign brought GoDaddy's new value proposition to life in a meaningful way. On top of that, it drove a ton of engagement, and for the first time in a long time, the kind of positive publicity and sentiment that the brand was hoping for. In short, The Big Leap kicked ass.

Video for GoDaddy's The Big Leap 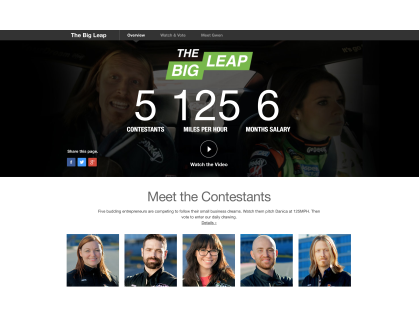 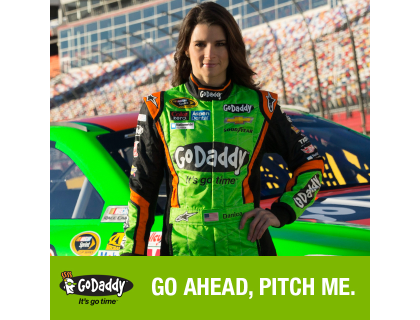 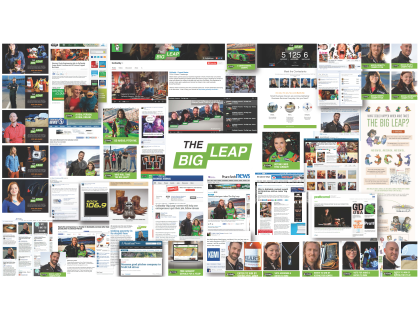