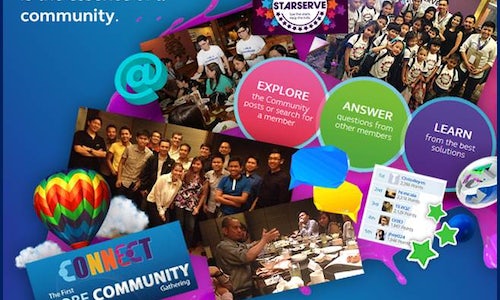 When a small team of creative brains decided to develop Globe Community, it had one mission in mind – to make an online venue that was more than a discussion forum, where people will happily go to help and build connections.

A few months in, and what seemed to be a grueling challenge became a victory. After launching Globe Community – the first and only brand-managed community in the Philippines - in 2013, the team was able to gain and surpass 60,000 members, all enjoying the exciting environment of the community. Customers and employees alike came to ask questions, get answers, and mingle with fellow members.

Members were awarded for their activity: Every time they posted, they earned points. Those points helped them ladder up the leaderboard. They also had "missions" they could complete to get extra points and unlock "Community Badges".

The missions were as easy as setting up an avatar to following an influential user, or completing his profile to joining one of the Interest Groups. The more points a member earned, the higher he would climb up the leaderboard. Once a member became part of the all-time leaderboard, Globe awarded him with VIP perks like invites to dinners with Globe executives.

All these shaped Globe Community into what it is today – a place where answered questions helped 40% percent of the customers weekly save a call to Globe; and a venue of thousands of happy members, running on the philosophy of helping others for the sake of helping.

With thousands of online forums in the Philippines, standing out and being on the top of the list was a real challenge. To deviate from the average and create a unique experience, Globe built an online community with features that worked 100% to encourage and enhance the experience of people helping people. This place was named Globe Community.

More than an online discussion forum, Globe Community was a collaborative support program that encouraged proactive engagement among members. Since its launch, the community had grown in terms of membership, as well as engagement and relationships, among its over 60,000 members. Part of the strategy in promoting membership and engagement was to utilize gamification.

From the moment customers created their account and logged in, every action they made - posting in the discussion thread, answering a concern, creating a blog entry, or joining and being active in any of the Interest Groups - earned them a point. The higher the points, the more they would level up.

To further promote the spirit of helping or teaching, Globe integrated the idea in the levels that the members would work to reach.

New members were ranked as "New Pupil", and when they earned 51 to 100 points, they would become a "Beginner". The more active members were, the more points they would earn. Upon reaching 11,001 points, members moved up to the "Scholar" level, and with 14,001 points, they became an "Expert". Helping members earned more points and allowed customers to reach the highest level and be named a "Legend". This was reserved for members who went beyond 80,000 points.

The challenge did not end there. All Globe Community members had "missions" they could complete to earn additional points. Every mission accomplished also unlocked one of Globe Community's 10 badges, which members could proudly display on their community profile. The badges range from "Follower" (earned when members found and followed 10 other people they considered interesting) to "Super Helper" (unlocked when members kept answering open questions and five of their answers were marked as correct).

With the gaming feature of earning points, completing missions, and unlocking badges, Globe Community had easily encouraged a lot of customers to join the fun discussions at the community. Having a large number of community points ensured their spots in the monthly and all-time leaderboard. To make the race to the leaderboard more thrilling, Globe reverted the rankings back to zero every start of the month. This challenged the top members to fight for their standings by being more active and by continuing to help their fellow members.

Community members were especially excited to gain as much points as they could, because the points members earned monthly accumulated for the all-time leaderboard. Then, the consistent topnotchers and most active members were turned into "Superfans", and being a Superfan opened exclusive perks and privileges, including invites to media launches, events, and exclusive dinners.

For the Superfans, the time spent in earning points was time well spent not only because of the incentives, but more so because they got to help their companions in great need of quick solutions. By giving answers to questions posted based only on their own experiences and by sharing blogs, Superfans helped Globe Community become the only friendly virtual place to go to for Globe-related concerns. They helped the entire team answer member posts, address customer concerns, and promote promos and events.

In keeping with the growing number of Superfans, the Globe Community team plans to have a special program for them. This program will add extra authority and benefit to the Superfans, and will put them through workshops and training sessions to hone them to become the next Globe ambassadors.

Today, forums have become online venues for conversations and exchange of advice between complete strangers. They allow for collaboration through sharing of opinion, ideas, and experiences. Globe has taken this further. Addressing the demanding needs of Globe customers, Globe Community has provided an open hub where helping other people is not only easy and rewarding, but fun. It is a direct and engaging way of getting customers involved with the brand, resulting in a friendly and dynamic relationship between Globe and its customers.

Globe has cut across communication barriers with Globe Community, and it will continue to revolutionize the use of gamification to deliver a wonderful community experience to customers, shifting from purely digital to "phygital", increasing opportunities for customer involvement, and pushing the boundaries of customer engagement ever skyward. 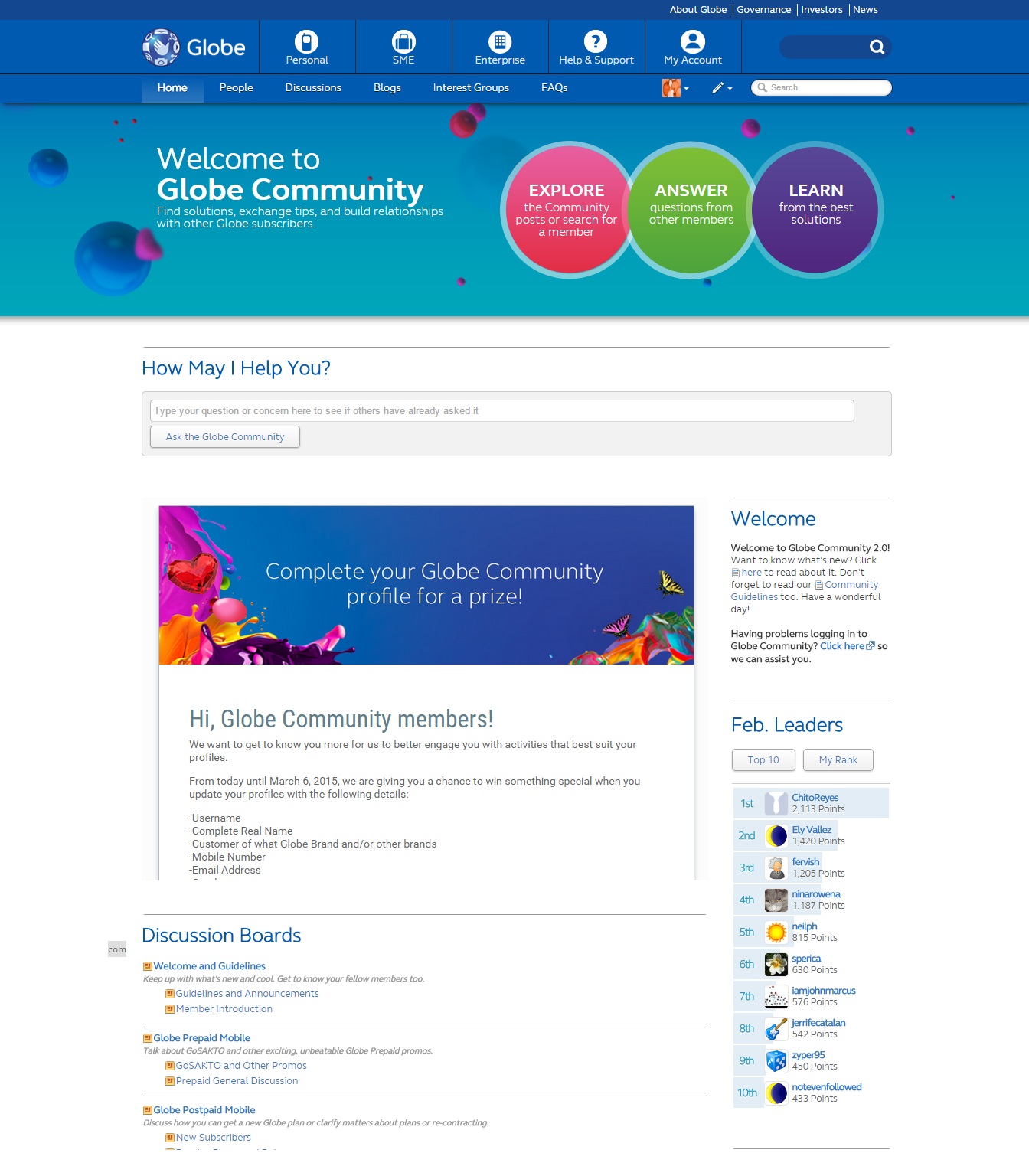 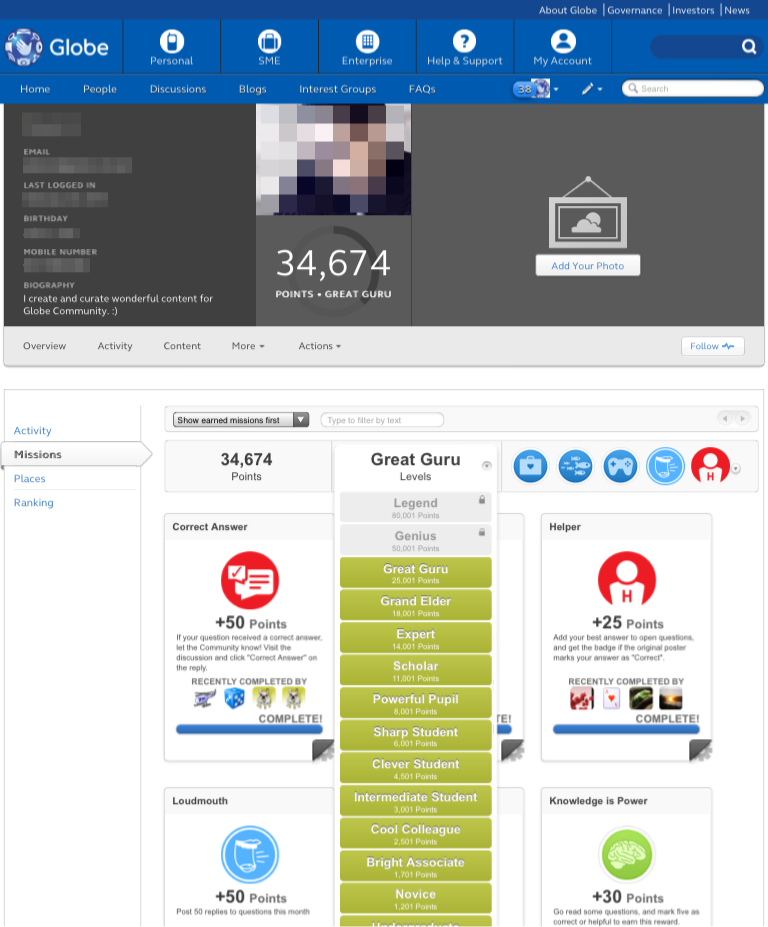 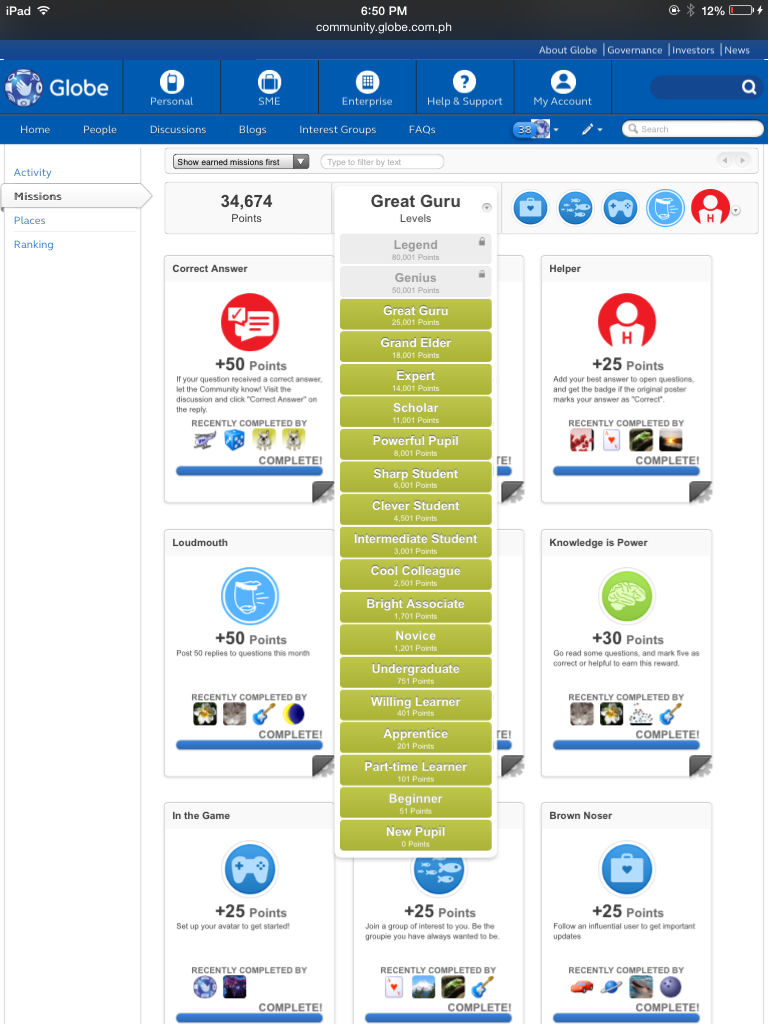 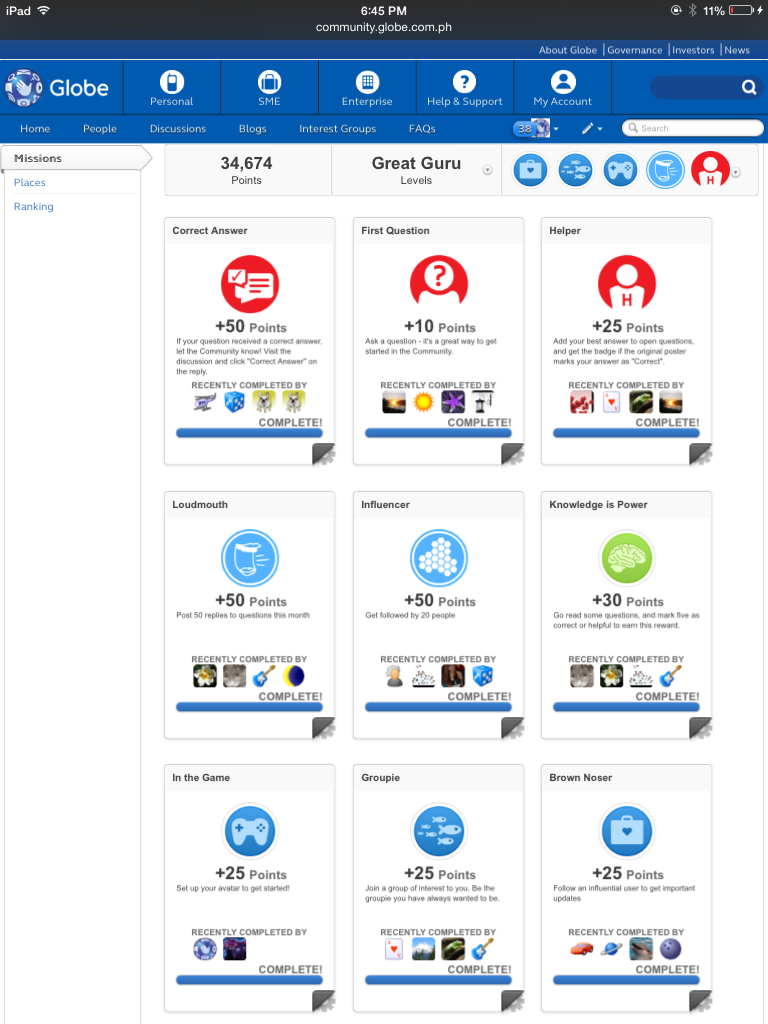 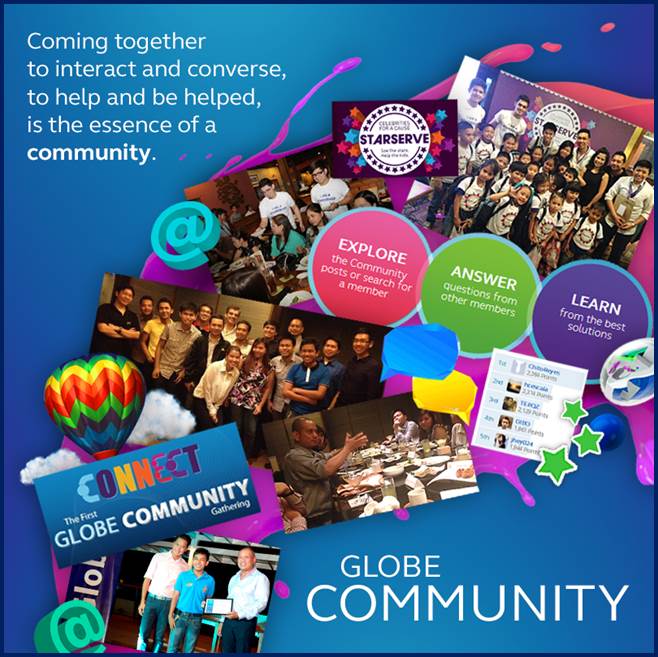