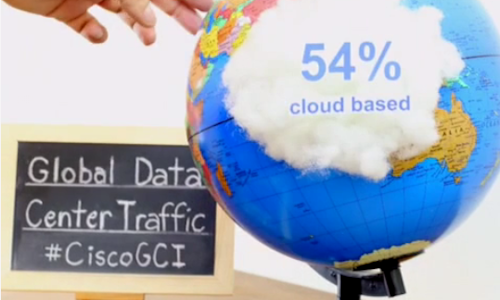 Developed to project global data center and cloud-based traffic growth and trends, The Cisco Global Cloud Index (GCI) , 2013-2018 was one of the company's most anticipated study releases. Generated by modelling and analysis of multiple sources, results from more than 150 million network speed and latency tests and third-party market research, the GCI is filled with invaluable statistics and projections associated with data center virtualization, cloud computing and more.

Considering the wealth of information revealed in the GCI, Cisco knew it would take a unique campaign to drive global awareness, education and heightened social conversations around this year's release. To do this, Cisco's social media team created an integrated promotional campaign, incorporating classic research methods and optimizing the power of social media platforms. Using sixteen shareable assets, ranging from jazz-backed Vine and Instagram videos and an informative white paper to an interactive GCI tool and a series of colorful infographics, Cisco focused on reaching and educating an audience of media professionals, technology influencers and C-level executives. The team's strategy also focused on longevity, designing relevant assets that would extend the campaign's influence far beyond the day of its release.

After millions of impressions and thousands of "shares," "Tweets," and "Likes," – and without the benefit of media buy support, Cisco's social media team produced a powerful campaign that was educational, informative and ground-breaking.

It's no small feat to forecast the growth of global data center and cloud-based IP traffic trends, but that's exactly what Cisco accomplished with the release of its fourth annual study, the Global Cloud Index (GCI): Forecast and Methodology, 2013 – 2018. Released in 2014, the GCI is rife with information associated with data center virtualization, cloud computing and more.

Cisco's social media team knew it would take an innovative campaign to promote the numbers-heavy study findings, showcase the data relevance and maximize awareness potential for the GCI release. Considering the targeted audience - bloggers, analysts, media, government regulators and service providers - the team created sixteen distinctive and "shareable" digital assets. In designing the assets, ranging from Instagram and Vine videos to an interactive web tool, the team considered the following:

Highly engaging content needed to be more organic, and less "corporate" and Cisco-centric.

Cisco also focused on extending the GCI promotion beyond release date, unlike other companies that focus solely on the "day of" announcement. This integrated campaign was a Cisco-first and several standout pieces leveraged the unique characteristics and "pull" of social media:

Vine (1, 2, 3) and Instagram (1, 2) Videos – Short, shareable and engaging video content were the keys to using Vine and Instagram to drive awareness for the GCI. A small team of decision-makers, all with expertise in short-form social media outreach and influence, collaborated to ensure Cisco's new foray was successful.

Each video used graphical or text elements to relate to the audience. For example, Instagram 2 was released right before the year-end holidays with a holiday theme humanizing the GCI. Prioritizing key content for the short segments, Cisco culled insights from analysts, influencers and media who followed the GCI's release to research their main subjects of interest. This strategy decided the four topics highlighted. Using stop-motion animation, another Cisco first, Cisco created colorful videos to showcase data trends.

Cisco's Data Center Blog Channel Blog Posting–This blog was a high-level overview of the GCI and included one short-form and one long-form video. Readers were invited to join Cisco's Twitter conversation using #CiscoGCI and also encouraged to tweet questions.

Infographic and Micro-Infographics – In a series of infographics, Cisco brought key findings of the GCI to life. The first infographic was a single snapshot of specific data findings, color-coded to highlight trends in global data traffic, specialized data types, regional differences and projects for Internet adoption by country and more.

Interactive Webcast – Specifically targeting technical managers in service provider companies with stake in purchasing decisions and designing and implementing secured networks, more than 100 key industry players joined this discussion, getting answers to questions regarding cloud readiness of their companies, network requirements and more pertaining to their specific positions.

YouTube Video – In a humorous take on a classic television show, a Rough Collie, well-versed in cloud traffic and workloads, ultimately "saves" and educates his seemingly clueless owner on statistics regarding global cloud traffic.

The GCI produced a firestorm of chatter and engagements on social media following its release:

From November 4 through November 10, Cisco received 1,251 conversations surrounding the GCI, with 5.2 million estimated impressions. To date, the campaign has received 2,381conversations, more than 666 social engagements, 11,364 click-throughs, and 11.8 estimated impressions, proving the extended lifespan of the campaign was incredibly successful.

The trends revealed in the GCI highlights the continued adoption and investment that companies, businesses and governments are making in cloud solutions and technology. Today, the Cisco GCI research is blazing the cloud and global traffic innovation of tomorrow and now, the world knows how to harness the opportunities that await us all. 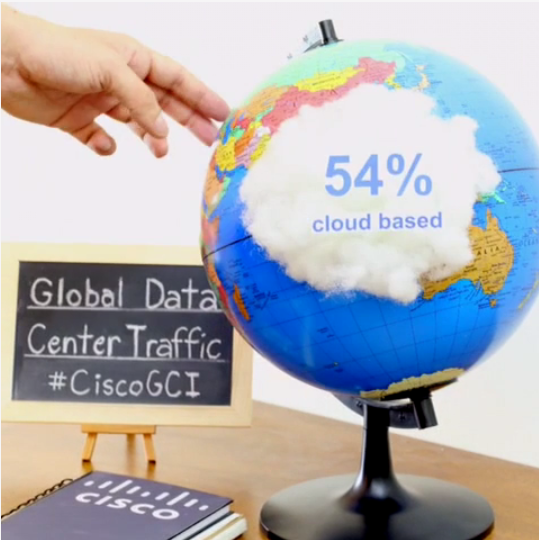