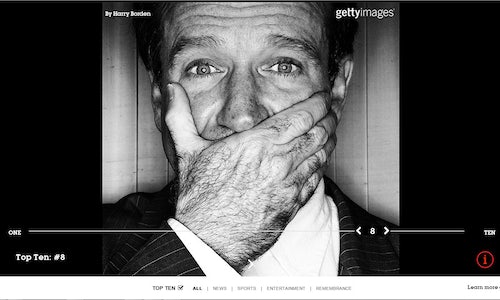 For over 10 years, Getty Images has produced their annual "Year in Focus" book, but this year they wanted to expand their reach beyond their regular target audience of photo editors and art directors, and engage the social web. With the goal of elevating the perception of Getty Images as the top source of high quality, inspiring, moving photography, Ayzenberg worked with them to develop a campaign that leaned into the idea of "Moving the World Through Images" and provided a platform that not only focused on the beauty and impact of the images, but allowed fans to select the #MostMoving.

The campaign asked the question: "What was the most moving image of 2014?" and centered on a visually engaging digital hub Ayzenberg created at http://yearinfocus.gettyimages.com. There, users could browse through some of the year's most captivating photography and vote on those images that moved them.

Throughout the campaign we tracked those images receiving the most votes, and then released the final list of top 10 most moving images across Getty Images' key categories – sports, news, entertainment, and remembrance. The campaign received a total of 294,219 votes from over 156,000 unique visitors hailing from 165 countries. Across social channels, the Year in Focus campaign earned 8.4M impressions and generated 41K social interactions and 265K video views.

The #YearinFocus campaign first and foremost was aimed at giving viewers an immersive way to experience the year's photography.

Both in terms of design and functionality, the website accomplished this by strategically utilizing the screen in a way that kept the spotlight on the images and ensured that navigational elements were non-invasive. This, in turn, made voting an enjoyable experience for users and led to strong turnout, with over 294k total votes from 156k unique visitors hailing from 165 countries.

Across social channels, this goal was met by accompanying images with copy that helped tell a broader story, but which left room for the photos to speak for themselves. At the same time, through the use of cinemagraphs and short-form video, we were able to add depth to the images and bring them to live in a way that maintained image integrity but gave users a unique, new way of engaging. The campaign had the strongest presence on Tumblr and Instagram, generating 18k and 16k engagements respectively.

Digital advertising provided yet another terrific opportunity to balance the goal of showing off Getty Images' high-quality photography with the necessity of driving people to the website to participate in voting. In addition to banners that highlighted a full range of captivating photos across key categories, we leveraged an attention-grabbing expandable banner that allowed users to view a select number of photos and begin voting within the unit itself.

Finally, to enable the photos to come together as a story, we created both a kick-off and wrap-up video for the campaign, which provided an overarching narrative and drove engagement. On Tumblr, the kick off video generated over 900k impressions, while the wrap-up video received over 840k impressions on Twitter. Throughout the campaign, these videos contributed to significant fan growth on Getty Images' YouTube channel, with a 21% increase in new subscribers over the prior 3-month period.