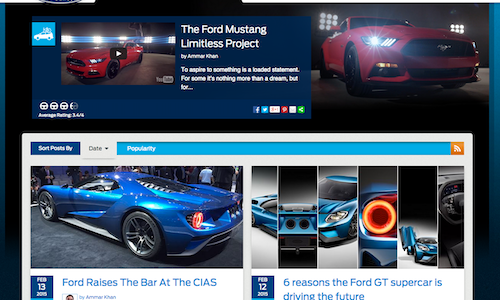 When other auto manufacturers were barely present on social media in Canada, the Ford Blue blog and Blogue Bleu spearheaded a social first approach. Ford took this blog platform and integrated it with impressive Facebook fan acquisition and content production, a leading presence on Twitter, and a willingness to produce both traditional marketing content and made-for-social content that engaged Ford's significant audience, while bringing innovation and creativity to multiple social media platforms and channels.

Thanks to the Ford blog, Facebook pages, Twitter accounts, and later Instagram in Canada, over the course of 2014 Ford Team social generated total Impressions averaging 36,344,045 per month, reaching on average 9,649,970 people per month, and producing an average of 327,841 engagements with fans each month. The industry average for Facebook and Twitter engagements for Q4 was 48K, while the Twitter industry impression average was 24.7M

Ford of Canada has an industry leading outreach team. Early on, Ford took a leadership position with a dedicated Quebec Presence thanks to the Ford Quebec French Facebook page started on Sep. 10, 2012. No other auto manufacturers had a significant Quebec presence at the time. Ford Team Social pioneered with 3 bilingual community managers (2 located in the Montreal area) available Monday-Friday 9am-9pm, Saturday-Sunday 9am-5pm. Across Canada, the team's presence included 4 community mangers in English available Monday-Friday 9am-9pm, Saturday-Sunday 9am-5pm. 3 were located in Toronto and 1 in Vancouver.

Ford led on social media with engaging fans, showing against other manufacturers that Ford Canada's approach of leading with owner stories and lifestyle related content on social channels had the greatest impact amongst fans for likelihood to consider (Source: Environics Research Group).

Ford's social-first strategy helped fans with purchase decisions and incorporated their feedback into content as a valuable part of the shopping and customer experience. The team took social metrics seriously and deployed a comprehensive act-measure-adjust strategy. In addition to mandating ongoing reporting based on social media metrics, Ford also championed a series of Social Media Survey initiatives. The results give Ford cutting edge insights into their fan community online, and the overall health of the brand perception.

In comparison to competing brands, Ford of Canada consistently had one of the biggest fan bases on Facebook and Twitter, and had higher-than-average engagement with their fans for the automotive sector throughout the year. Ford often operated in the sweet spot, generating more impressions and engagements than competitors with fewer overall social media posts, a sign of successful content.

Ford Farm Tough: Ford told the story of a 6-year-old farmer and how he uses his battery-powered 2015 F-150 Power Wheels in his fantasy backyard farm. In English, this post earned over 5.3MM impressions, and 50K likes, comments and shares, and the video earned an unprecedented 695K video views. In French, another 1.5MM impressions were generated, as well as 17K likes, comments and shares, and 176K video views. Link to top video

Ultimate Weekend Escape: Ford strapped Go-Pro cameras to the heads of two travellers and created a series of videos that put the 2014 Ford Escape into the context of real life. The Escapes to BC, Ontario, and Quebec generated a total of 7.2MM impressions, 8.4K likes, comments and shares, and 246K video views. Link to top video

Julian vs The Boss: To showcase the convenience and advantage of the Ford Focus in urban markets, Ford developed a series of episodic videos that chronicled a day-in-the-life of a young professional in Montreal as he battled his boss's outrageous requests. The campaign generated over 6.3MM impressions, and 1.7K interactions. Link to top video

#FordChatCA: Ford Team Social developed regular Twitter chats that consistently trended nationally and kept Ford in touch with their fan base. Topics were of interest to fans who competed for gas cards and glory. Other brands, such as the Toronto Maple Leafs, got in on the action thanks to Ford Team Social's love of bacon. #FordChatCA generated 15,141 Tweets over 12 months, with 4,694 Retweets from 837 people averaging 13,301,273 potential social impressions per Twitter chat.

Friday Night Live at the ROM #FNLROM : Ford's activation at the Royal Ontario Museum struck a chord with the Toronto party scene. #FNLROM generated 4,926 Tweets over two months, with 2,107 Retweets from 2,153 people averaging 3,657,095 potential social impressions over the course of the activation.

#FansGoFurther - @TheFordFANatic MLSE Activation: Beginning with the Fan Fest Social Outreach program, Ford's message was brought home to Maple Leafs fans during hockey season. In the last three months of 2014, the Ford MLSE activation generated 13,023 Tweets, with 3,829 Retweets from 4,997 people averaging 5,159,029 potential social impressions. This uptake was generated with only 215 Tweets from the @TheFordFANatic account, so the organic success of the program is proof of Ford helping fans go further. 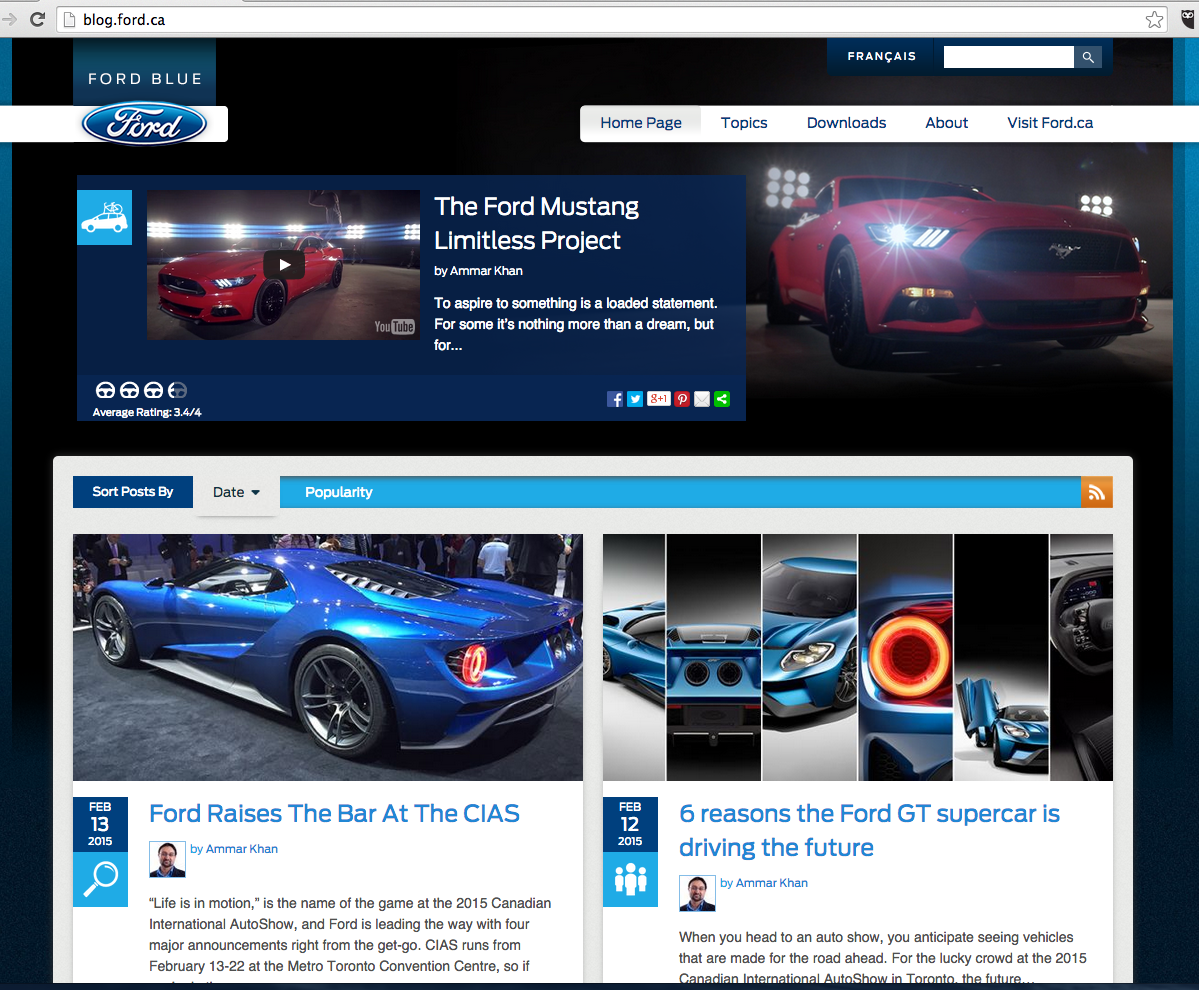 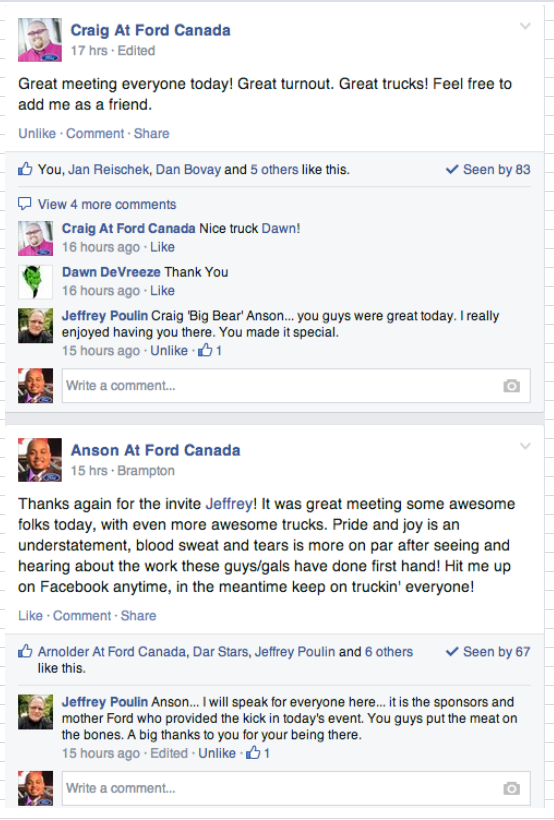 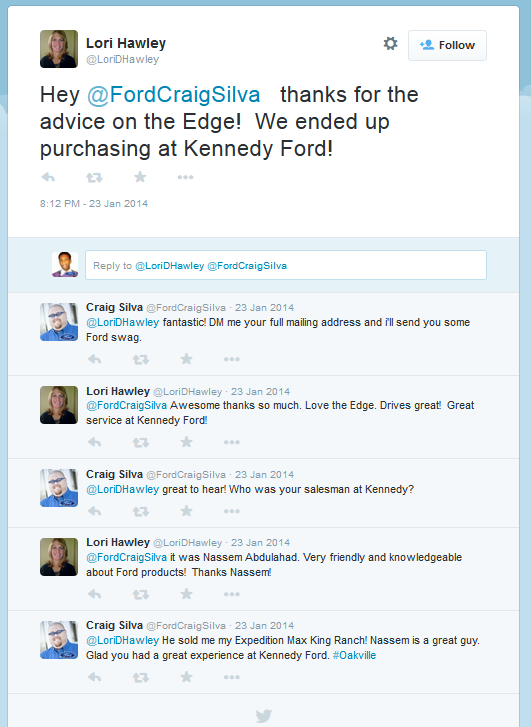