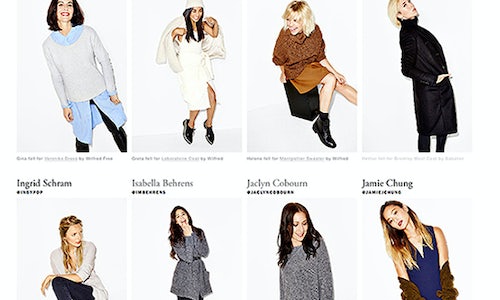 #FallForUs, Aritzia’s first fully integrated marketing campaign, is an innovative, Instagram-first social campaign, introducing the Fall 2014 collection and celebrating the people who love Aritzia and the pieces they love from the Fall collection. #FallForUs is symbolic in its meaning: • Fall for us – as a relatively new brand in the US and expanding across Canada from our Vancouver roots, Aritzia invited fresh faces and fashion influencers to experience the Aritzia brand • Fall, for us – an introduction to Aritzia fall product, each participant was photographed with their favorite piece/s from the new fall collectionOver two days in NY/LA, photo/video-graphed 90 influencers. #FallForUs launched August 13th, first on Instagram, simultaneously on Aritzia.com, then on Facebook/Twitter, thru strategic flood of planned and viral posts from over 150 influencers (actresses, musicians, editors and bloggers, using the caption "I fell for X(item/s) @Aritzia #FallForUs," whose social followings combined exceeded 5 million followers) cohesively highlighting the items everyone “fell for" from the new collection. Simultaneously asking customers to share their favourites through a UGC contest, integrated Olapic, pulling Instagram posts from customers (and influencers) onto Aritzia.com and associating their looks, making the pieces instantly shoppable across any device. Instagram, Facebook and Twitter gained a collective 27K followers throughout the campaign, which is an average of 4.5K new followers per week [pre campaign average: 800/week]. To gain the equivalent amount of followers previous to the campaign it would have taken approximately 6 months. #FallForUs drove eCommerce comp growth more than 91% over pre-campaign levels. On Instagram, there was a total of 4,800 #FallForUs posts, which earned 4.6 million likes, at an average of 567 likes per post and has gained 22,713 new followers . On Facebook, there was a total of 314 #FallForUs posts, which earned 7.7k likes, at an average of 22 likes per post, and gained 5765 new page likes Twitter following increased by 1,200 followers. Over 4800 entries for UGC contest #FallForUs was covered in 25 publications, 24 of them digital and one print, including WWD, Style.com, Nymag.com, Nylon.com, PeopleStyleWatch.com, FashionWeekDaily.com, JustJared.com among others. Total circulation of these media placements was 54M, and total impressions 143M. Key participants: Anna Camp, Samira Wiley, Jamie Chung, Greta Lee, Amanda Warren, Amanda Crew, Rachel Bronsnahan and Sabrina Carpenter without payment.

We’ve been growing as a brand organically for the past 30 years. Aritzia has never done advertising or marketing in the traditional way. #FallForUs stems from us understanding two things about our customer: who she is (stylish, connected, influential - mostly Millennial women – many of whom have loyalty and affinity with our brand) and what inspires her today (her friends and key individuals across the media and entertainment influence her style and she looks for this inspiration on social media, especially Instagram). We were able to culminate this through an omni-channel experience both in-store and online with exquisite results.