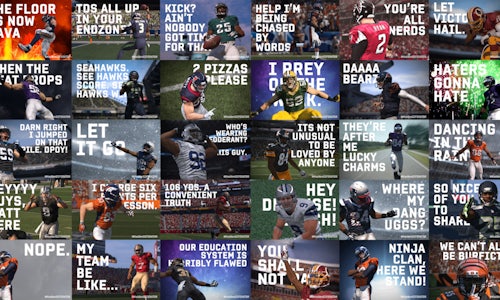 Fewer people are playing Madden than they once did, despite the fact that NFL ratings are higher than ever. To launch Madden NFL 15, EA Games needed the popular franchise to regain its cultural relevance and connect with a new generation of football fans.

We created Madden GIFERATOR, a real-time NFL GIF engine that let fans celebrate winning moments and zing their rivals throughout the season. For every NFL game, GIFERATOR generated a live stream of animated GIFs triggered by the action unfolding on TV.

With each brag-worthy play, GIFERATOR dynamically combined relevant game footage, stinging headlines, and dynamic stats for real-time delivery at the height of conversation. Real-time ads, tailored to fans of each of the 32 NFL teams, were delivered just seconds after events happened on TV, reaching them on second screen devices where they were already looking for content about their favorite teams and live games.

GIFERATOR ran as a second-screen experience for every single NFL game, keeping Madden relevant all season long. Fans could also take control of the GIFERATOR and create their own GIFs on any device.

GIFERATOR exploded into every corner of online culture with massive adoption by fans, NFL teams and players, and even other brands. Adweek called the campaign "One of the most innovative digital ad products of 2014." With its epic scale and targeted reach, GIFERATOR set a new standard for real-time marketing.

Throughout every live NFL game, GIFERATOR created a running stream of memes at scale, triggered by the action on the field to fan the flames of team rivalries as they play out on TV screens. GIFERATOR instantly combined Madden 15 video game footage and relevant banter to comment on the game and its players. The animated GIFs were ready-made for sharing across the web and social channels.

In addition to the multi-platform website, GIFERATOR was delivered in real-time mobile and desktop display ads, targeted to each viewer's team preference. The experience reached people already looking for ways to talk about the action as it happened.

Ad units included to-the-minute relevant data on the matchups and the score of games in progress, drawing fans into the experience. Once on the site, viewers could follow a timeline of events from the live game, represented by fan-created GIFs, and then use Madden GIFERATOR to create and share a GIF of their own.

Madden GIFERATOR launched for NFL's kick-off weekend and by Monday was used to create over 200,000 GIFs. NFL teams, players, and fans quickly adopted GIFERATOR as a bullhorn for anything and everything football.

GIFERATOR then catapulted into popular culture as it began trending on Tumblr, spawned its own subreddit, and exploded on Twitter. The media piled on, covering GIFERATOR from every angle. Outlets as diverse as The Washington Post and Buzzfeed, Fox Sports and College Humor, Fast Company and Maxim jumped on the GIFERATOR and shared all the creative, crazy and unintuitive ways people found to use it. 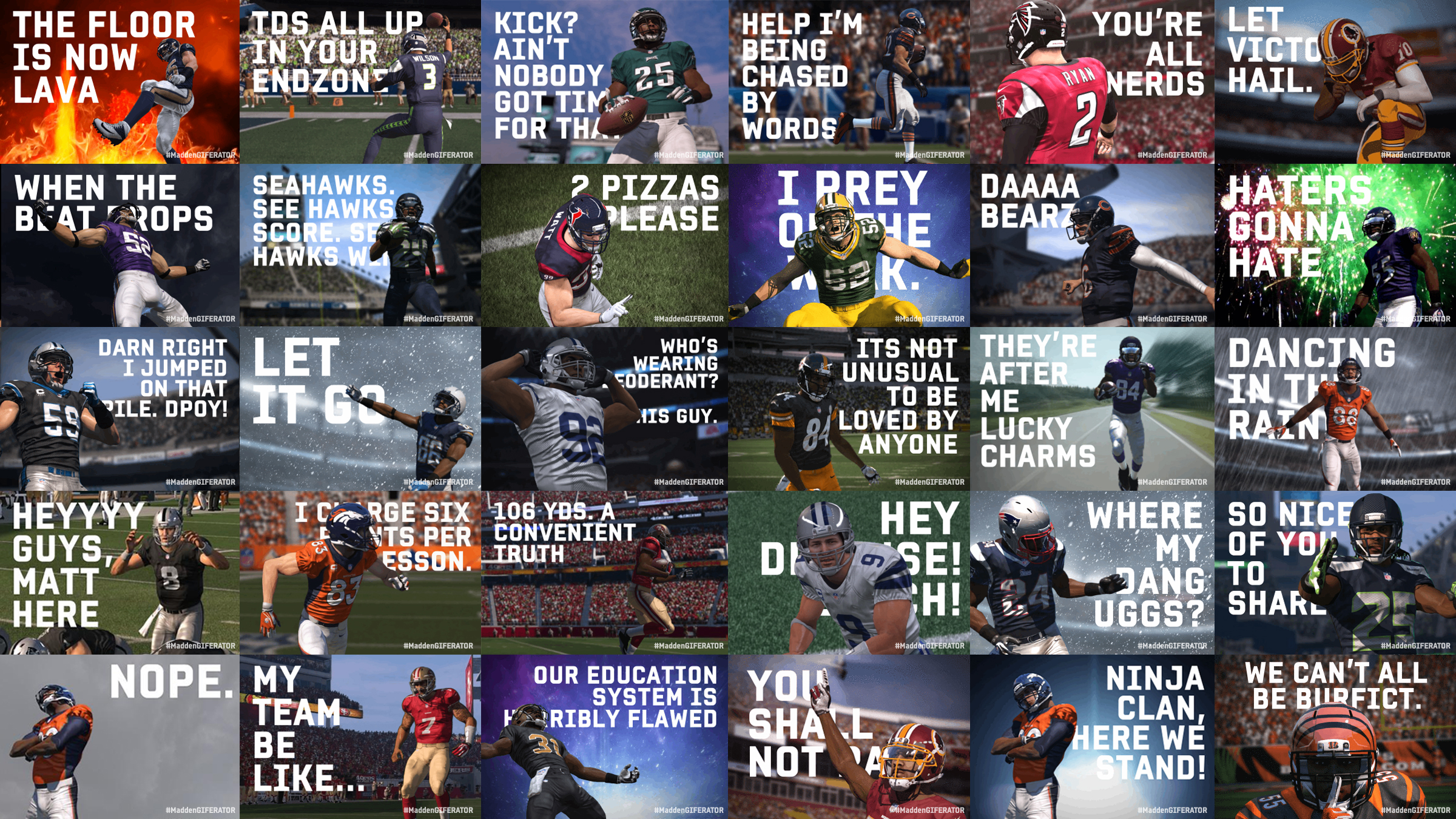 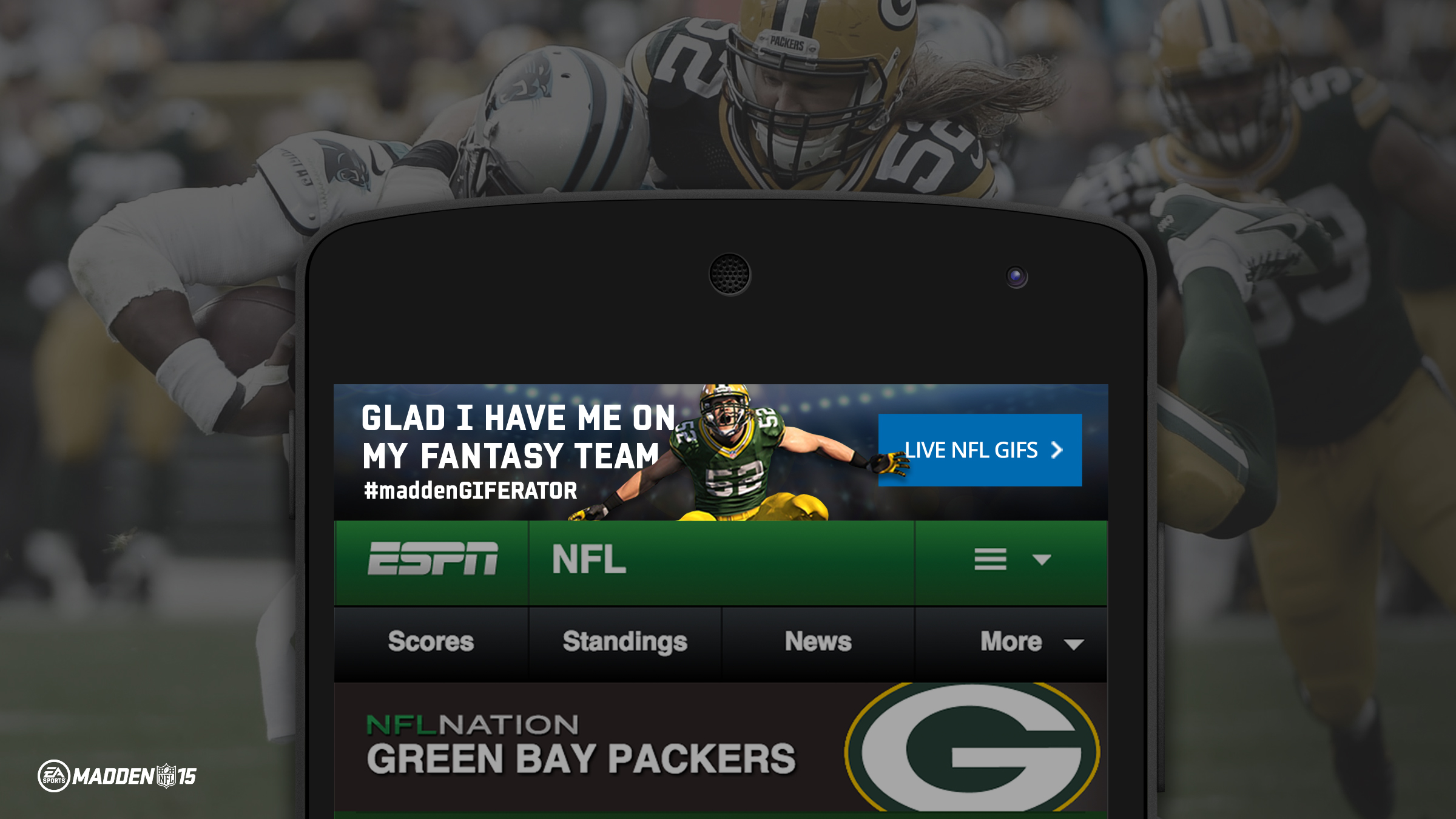 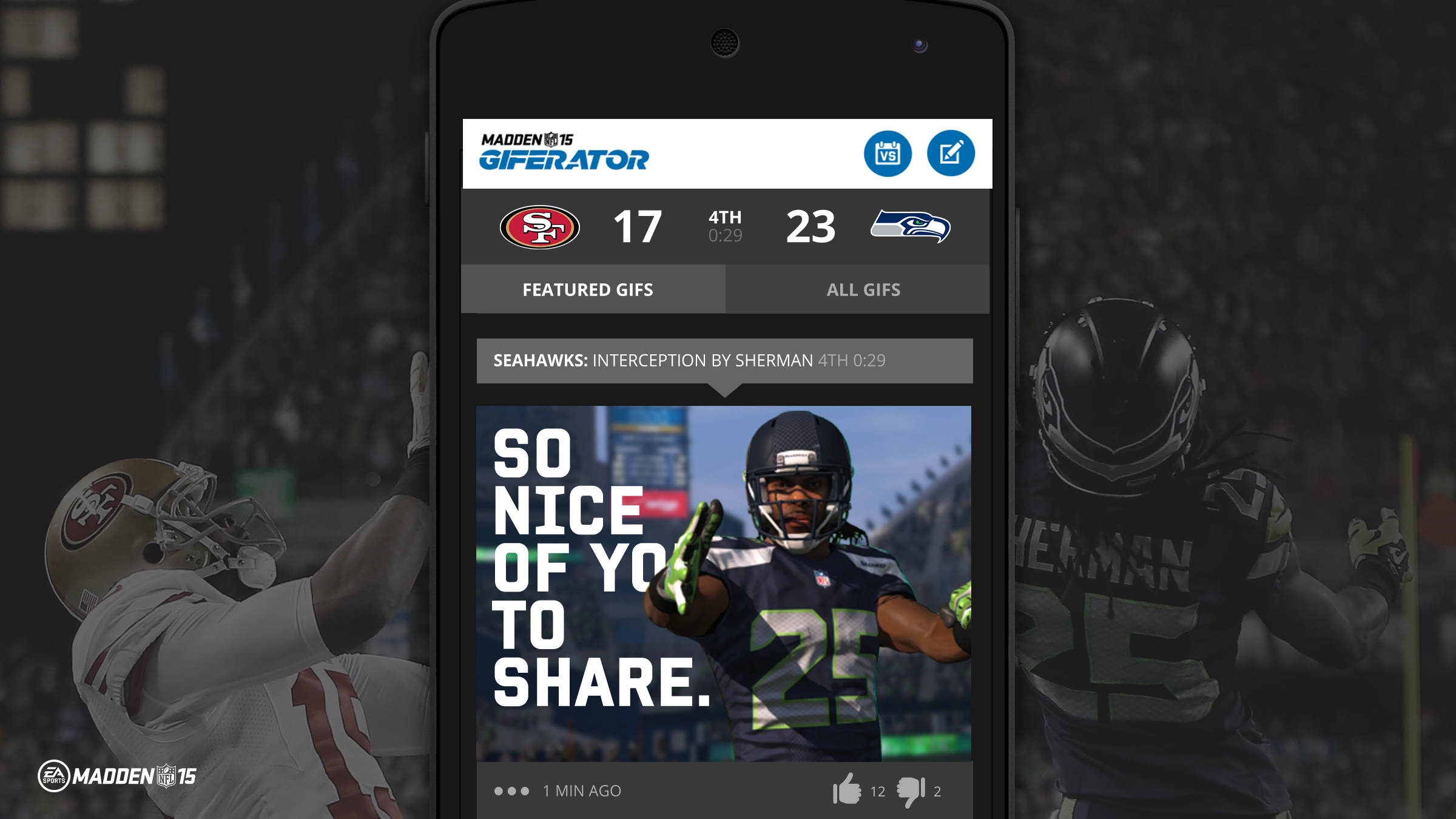 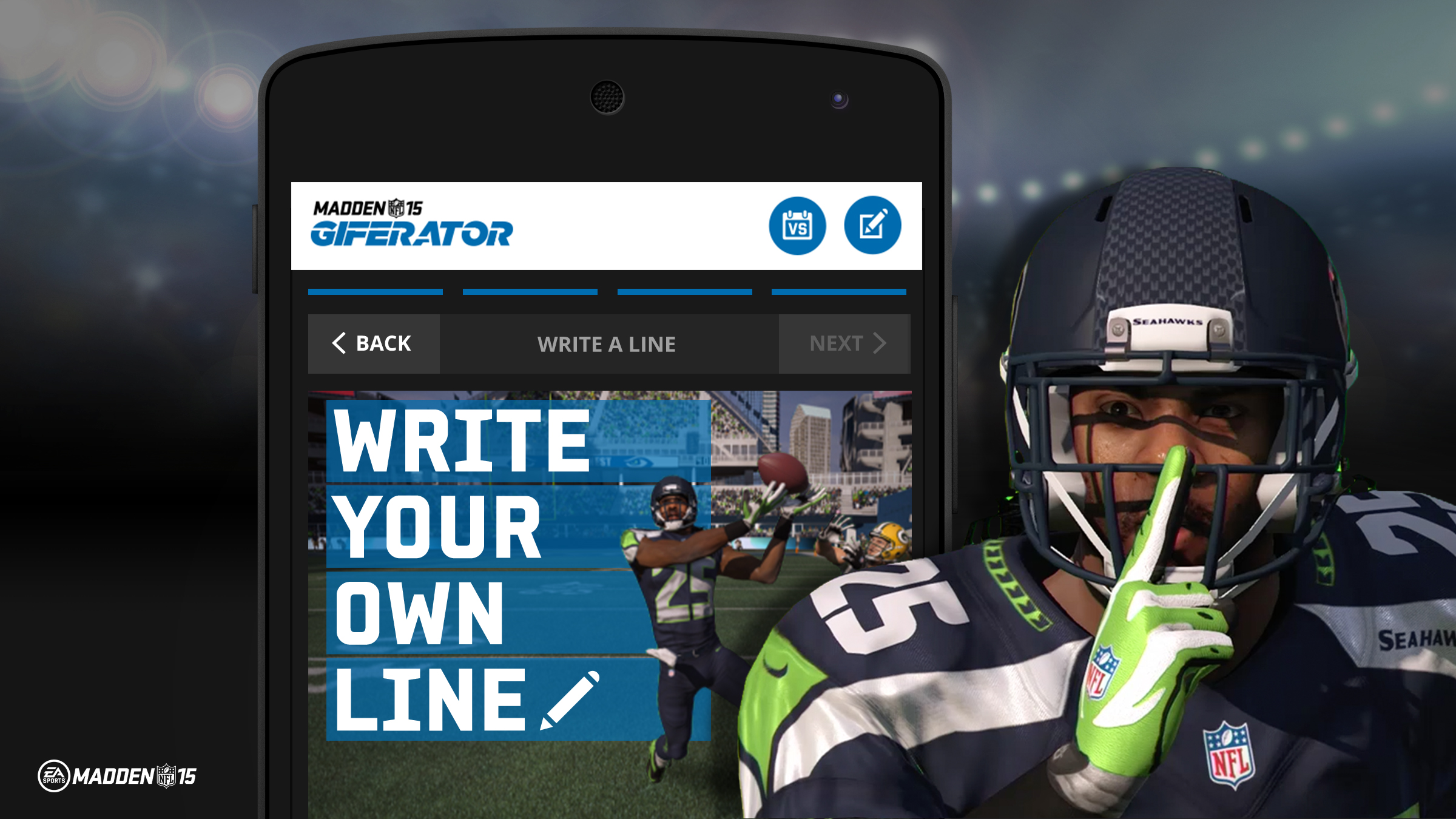 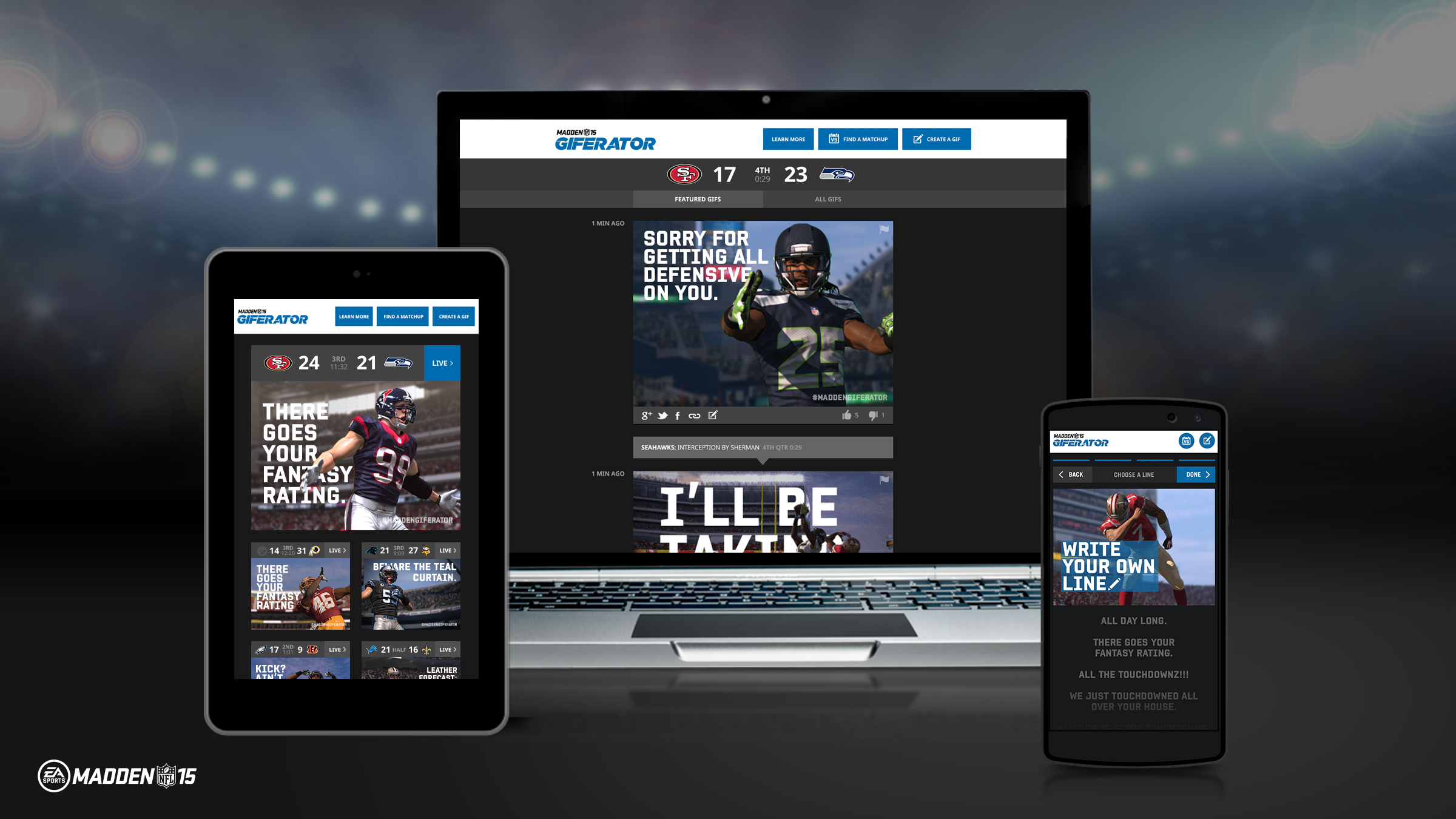 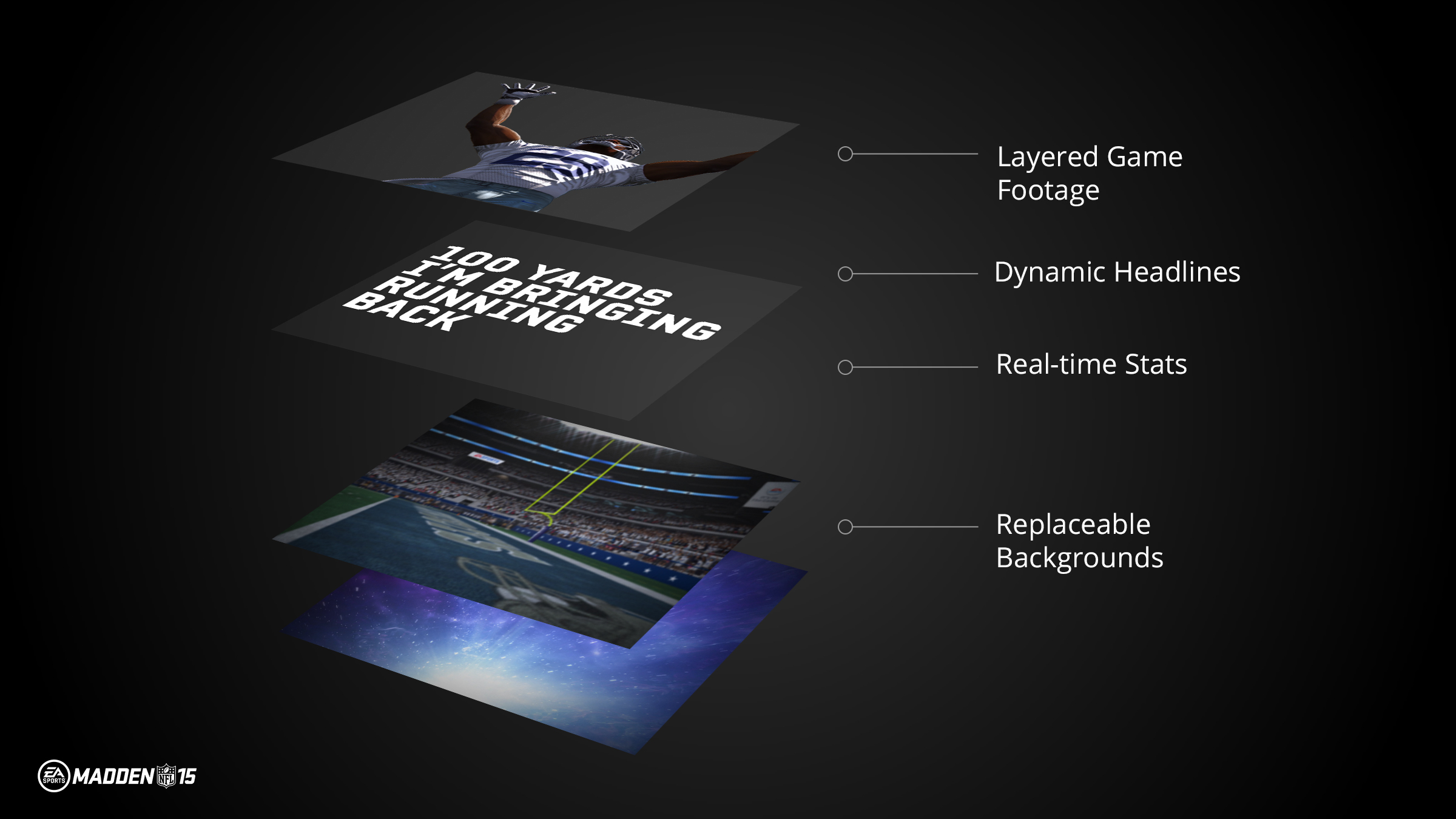