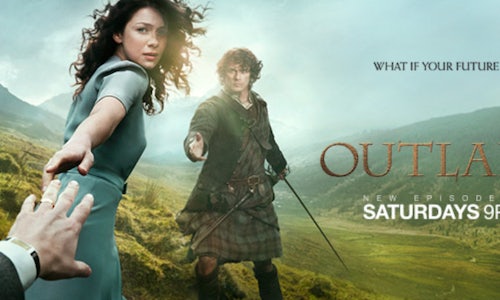 Dropping Kilts Everywhere: The Story Behind the Social Phenomenon of Outlander

Building a social presence for any brand new TV show is a challenge. However, our team at STARZ was presented a unique opportunity and challenge with Outlander. Based off of the best-selling book series written by Diana Gabaldon, Outlander had an existing fan base amassed over 20 years. Book fans created groups, fan sites and blogs dedicated to digging deeper into the details of the story and characters. They were anxious to see their favorite book come to life on screen, but at the same time very concerned that the TV series and its accompanying social content would meet their expectations.

To meet this challenge head on, we launched Outlander social channels on Facebook, Twitter and Instagram well in advance of the TV premiere to satisfy the fans' cravings for Outlander news and content. We also created a rich microsite, aggregating all Outlander social conversations into one location and included valuable content including an early trailer, a contest, social tools and tons of interactive content. Between pre-premiere and in-season content, we were able to keep our audience engaged, helping drive a 40% increase in viewership and generating the largest social following of any STARZ first season show.

Great ratings weren't the only story that social could help tell for Outlander. The communities grew quickly, but it was the engagement across a wide variety of platforms that was most impressive. This appetite for content allowed the STARZ social team to create a cohesive multi-platform strategy that used the features of each network or tool to provide fans with an immersive Outlander experience.

The hub of the Outlander digital presence was OutlanderCommunity.com, a microsite which pulled in various tweets, Instagram and blog posts that fans could use to find conversations and other interact with one another. It was also the launch pad for special activities, including a #WhereIsClaire contest to release an early trailer, an interactive tab that allowed users to explore Claire's apothecary and a Je Suis Prest ("I Am Ready") tool that fans could use to share on social that they were ready for the premiere. The results included:

860K total site visits, the most of any STARZ digital experience

7MM impressions of #WhereIsClaire, resulting in the hashtag trending on Twitter for 70 minutes.

Meanwhile, Facebook and Twitter were used to share everyday content such as trailers, previews, memes, quote postcards and more. Using these platforms we also provided fans with live coverage of the Outlander invasion of San Diego Comic-Con. Street teams took San Diego by storm to rally Outlander fans as invited our fans at home to experience the action with real-time updates from the event. We live tweeted the Q&A panel, released a trailer and the opening credits and allowed fans to experience Comic-Con through the eyes of the eyes of Outlander's, Sam Heughan, through an Instagram takeover. The result was over 20k comic con related mentions on Twitter, surpassing conversation surrounding other shows including large network series like The Black List and Agents of Shield.

Facebook was also used to launch a high-impact video buy on premiere day and host a Q&A with Gabaldon. Custom hashtags were used throughout the season on Twitter, including #OutlanderDay for the premiere and #Sassynach and #1743Problems for ongoing content. The handle also facilitated #AskOutlander chats with the show's cast on a weekly basis and shared real-time GIFs during each new episode on Saturday night. The results included:

Higher in-season engagement scores on Facebook and Twitter than notable shows such as Game of Thrones, Scandal, Orphan Black, True Blood and Vikings

Cracked the Top 5 of the Nielsen Twitter TV ratings for each episode, including No. 1 twice

Nine different Outlander hashtags/keywords trended either worldwide or in the U.S. on Twitter and the Season 2 renewal trended on Facebook

Finally, the show's Instagram account offered an inside look at the world of Outlander through exclusive behind the scenes photos and "Hey Lassie" memes featuring the show's main character, Jamie Fraser. The exclusive content on the featured on the channel helped drive its growth. Results included:

Reached 55K followers by the halfway point of the first eight episodes, a 4016% greater total than any other STARZ series Instagram

Video for Dropping Kilts Everywhere: The Story Behind the Social Phenomenon of Outlander