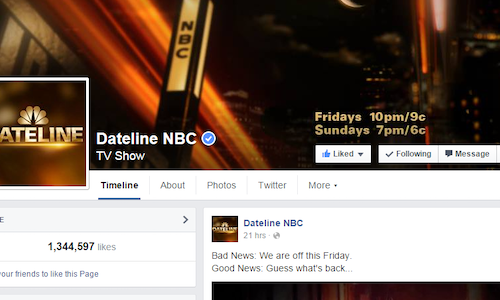 In May 2014, Dateline NBC earned more than one million "likes" on Facebook. We reached that milestone organically, by creating an extraordinary social community with one guiding principle: every follower counts and every story matters.

We don't pay for reach; we reach out. We value our followers' opinions on the stories we cover and enjoy their real-time, second-screen feedback on our storytelling. But we also engage in a dialogue that goes beyond the borders of our television program. We encourage our followers to share their own stories and life experiences. Some of those stories have led to weekly franchises on our page, some have turned into hour-long programs.

And we give back. We create things we think our followers will enjoy, just for the fun of it. Often, our thank you "presents" are born out of their comments. Whether it's a holiday gift like Keith Morrison reading "How the Grinch Stole Christmas," or a viewer-written selection of free voice mail announcements featuring our correspondents, or contests that bring fans to our headquarters and our reporters to their homes, we love to give our followers what they want as a way of saying thanks for being a part of our community.

From the start, our objective has been to build a respectful, robust and unique Facebook community. In January of 2014, we had 500,000 followers. Four months later, we passed a million. We think it's because of that philosophy: every follower counts and every story matters.

Dateline and our Facebook community are engaged in an ongoing dialogue that has led to some creative, powerful and unique initiatives and campaigns.

We frequently ask our followers what we call social questions, loosely related to issues that will come up in that week's broadcast. One episode dealt with a missing woman. So we asked, "Do you know someone who has simply… disappeared?" The response was overwhelming. We were flooded with missing posters and pleas for help from strangers to family members about missing loved ones. We simply couldn't ignore their voices. Every Monday since, we have highlighted one case brought to us by a follower. This became "Missing in America."

The series, which appeared throughout 2014 and continues, is entirely viewer-driven; we don't tell these stories because they are in the headlines, we tell them because they matter deeply to our fans.

Our fans have expressed how valuable this series is to them, because it gives them the opportunity to share a story while there is still the chance for a happy outcome. "Missing in America" is, potentially, a very powerful way to crowd-source the search for missing persons. For example, Dateline's 'Missing in America: Heather Elvis' posting reached nearly 8 million people at a time when we had only 500,000 followers. It was shared 170,000 times. The demand for more information on Heather's case prompted us to travel to interview Heather's family and detectives investigating her disappearance. The result was this video later posted to our Facebook page. Since then, two people have been charged in Heather's murder, and Dateline is working on a full-length broadcast about her case.

Dateline's digital team continues to follow each featured case, updating our followers not only with developments in these cases, but also reminders about unsolved cases.

'One in a Million'

We had a plan. First, a thank you note. The next day, we posted a 'One in a Million' video announcing a contest. The goal? To thank our Facebook fans and give them the chance to represent the others – to be the One in a Million – and go behind the scenes at Dateline. To win, all they had to do was tell us, why them?

More than 800 entries flooded in including rap videos, haikus, and photographs. Our panel of judges selected Kim Trimble's entry as the winner. Kim and a guest were flown to New York City on a three-day, all-expense-paid trip to spend time with the staff, Lester Holt and the correspondents. Get a taste of their visit by watching this video.

The idea for this project with Josh Mankiewicz and Keith Morrison came up during a chat with Keith on Facebook. Josh chimed in and suggested what fans have been asking for, for years -- that Keith record their voice mail greeting. Keith said he would if Josh would. That's all we needed.

We let viewers tell us what they would want Keith and Josh to record, narrowed down the field, and the finalists were voted on by our Facebook fans. The top two entries for each correspondent were then recorded and released on SoundCloud. They've been played almost 200,000 times.

We provided each finalist with a personalized version of their entry. We also picked a few people whose suggestions we loved -- but were too over the top to release publicly -- and recorded those as unpublicized random acts of appreciation.

'How the Grinch Stole Christmas'

Fans are obsessed with the voice of correspondent Keith Morrison. As a Christmas gift, we worked with the estate of Dr. Seuss to obtain permission for Keith to read the holiday classic, How the Grinch Stole Christmas. As with so many of our projects, the idea came from numerous Facebook followers. The media attention was phenomenal. One affiliate even ran it in its entirety on TV Christmas morning.

News You Can Use (But hope you never have to)

With projects and campaigns ranging from the deadly serious to the decidedly delightful, we hope you'll agree that Dateline's work on Facebook in 2014 is deserving of a Shorty award. 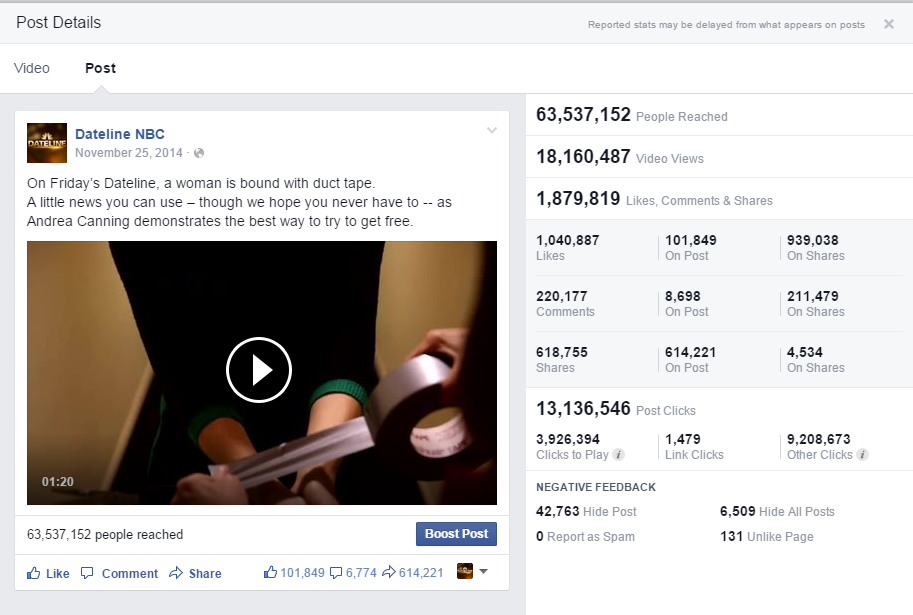 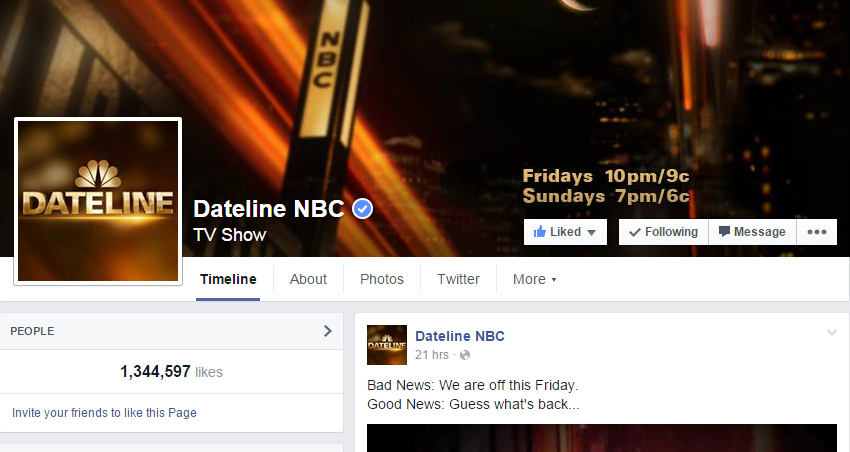 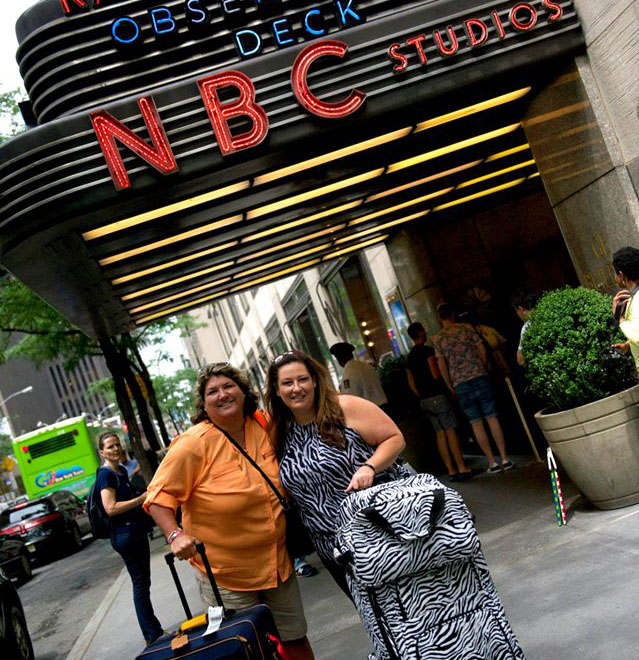 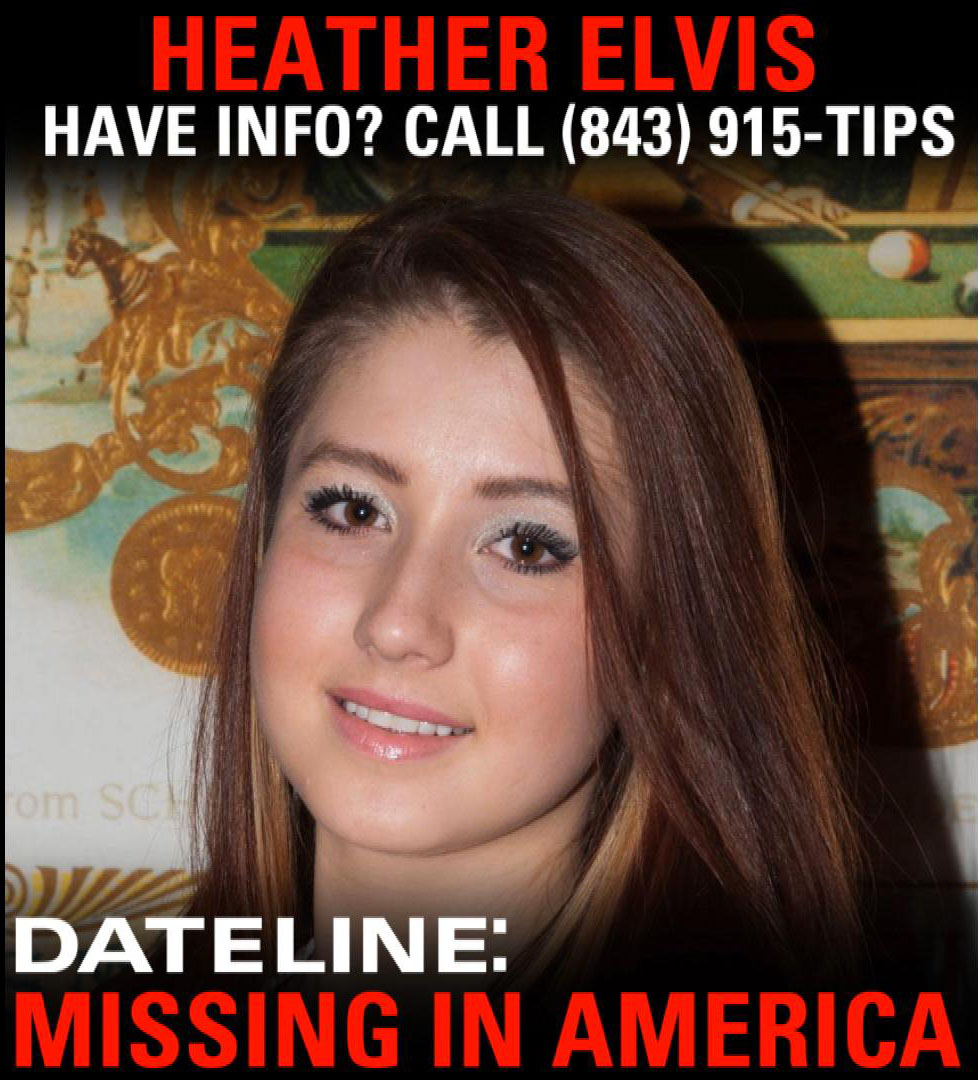 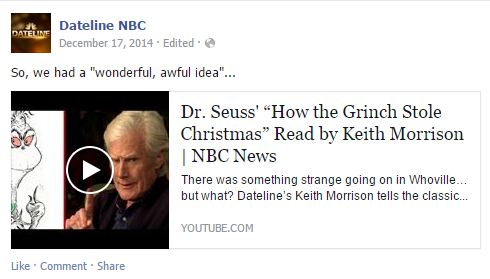