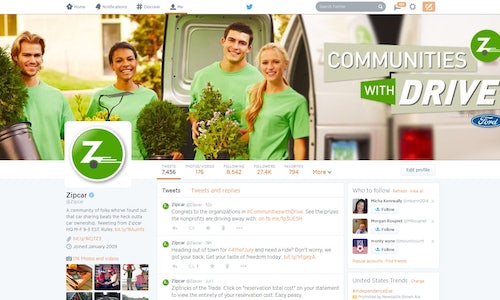 Launched in April in partnership with Ford Motor Company, Zipcar’s “Communities with Drive" contest was a social giving program conducted via Facebook, which awarded $200,000 in cash and Zipcar credit to 25 deserving non-profits. Communities with Drive was Zipcar and Ford’s way of recognizing and rewarding local communities doing their part to make cities better places to live. Non-profits interested in entering were able to submit their organization for consideration through a custom Facebook application. In addition, all interested individuals were able to nominate their favorite organizations within the custom app. Zipcar and Ford then narrowed down the entries to the top 25 finalists for the public voting phase via Zipcar’s Facebook page. This phase of the contest allowed the public to determine the prizing level each non-profit would win: $50,000 in cash and more than $15,000 in Zipcar credit for one grand prize winner; $7,000 in cash and more than $8,000 in Zipcar credit for three second prize winners; $2,000 in cash and more than $2,000 in Zipcar credit for the remaining 21 finalists. Communities with Drive supported three core campaign goals: 1. Rewarding those who are making a positive difference in the communities where we live, work and play, 2. Increasing awareness of Ford to Zipcar members and 3. Supporting brand awareness. More than 400 entries were received and the campaign generated more than 2.5 million social impressions, coverage in more than 20 publications and additional awareness via email and Zipcar’s online magazine, Ziptopia.

The key objective of the Communities with Drive campaign was to reward non-profits that are changing the cities we live and work in through a wide variety of charitable activities, a goal that was achieved by providing access to funding and Zipcar credit to organizations across the United States. Armed with their prizes, the 25 winning organizations are able to apply their cash prize to improving and expanding upon their current operations, while also using the Zipcar credit to support their transportation needs. The Communities with Drive campaign enabled Zipcar and Ford to support a broad spectrum of organizations with a number of different causes through one campaign. Through a custom-designed Facebook app, the contest moved through various phases over the course of four months, including: 1. Entry and Nomination Phase 2. Finalist Selection 3. Public Voting The public voting phase ended with the ranking announcement of the 25 nonprofit finalists. Following the grand prize winner announcement, an event was held in New York City to present with winning organization, Anjellicle Cats Rescue, with a giant check to celebrate their $50,000 win. To drive awareness, the campaign was shared across a number of Zipcar and Ford channels, which included: • Zipcar’s social pages, including national Facebook, Twitter and Google + pages, as well as local market Twitter handles. The contest was also shared on Zipcar’s University Facebook and Twitter pages, and LinkedIn. • Social support also included campaign creative takeovers on both Facebook and Twitter. • Social sharing of the contest on Ford’s Facebook page. • Promoted Tweets and Facebook ads were used to help drive additional paid awareness. • A landing page was created to help provide additional details about the campaign and its phases, as well as to house the contest rules. • Member ads on Zipcar.com helped to drive direct clicks to the contest landing page. • Six contest emails drove awareness of the campaign directly to Zipcar members. • A dedicated article on the contest and grand prize winner ran post-winner announcement on Zipcar’s online magazine, Ziptopia. • All finalists were also provided with a Finalist Toolkit complete with social copy, a press release template, blog post and pitch copy, and a campaign logo to help spread the word about their entry and the contest. In addition to the overall ability to help support 25 nonprofit organizations, the social and awareness campaign results were largely positive: • The contest received more than 400 nonprofit organization entries. • There was a 12% increase in Zipcar's Facebook fans during the contest period. • More than 6,000 campaign landing page views with more than 3,300 clicks from the landing page to the Facebook application were secured during the campaign timeframe. • Campaign coverage was secured in 22 news publications and blogs. • In the end, there were nearly 70,000 visits to the campaign Facebook app. A perception survey launched post-campaign also showed that Zipcar members enjoyed the campaign. More than 25% of those surveyed also indicated having a better opinion of Ford following the contest, helping to meet the campaign goal of driving brand awareness of both Zipcar and Ford. Communities with Drive was a largely successful campaign because it allowed Zipcar and Ford to not only drive brand awareness, but to also involve the brands’ members and customers in a community giving opportunity. At the conclusion of the contest, $200,000 in cash and Zipcar credit was given away to 25 nonprofit organizations, which are now able to better support the communities, people, animals and places they serve. 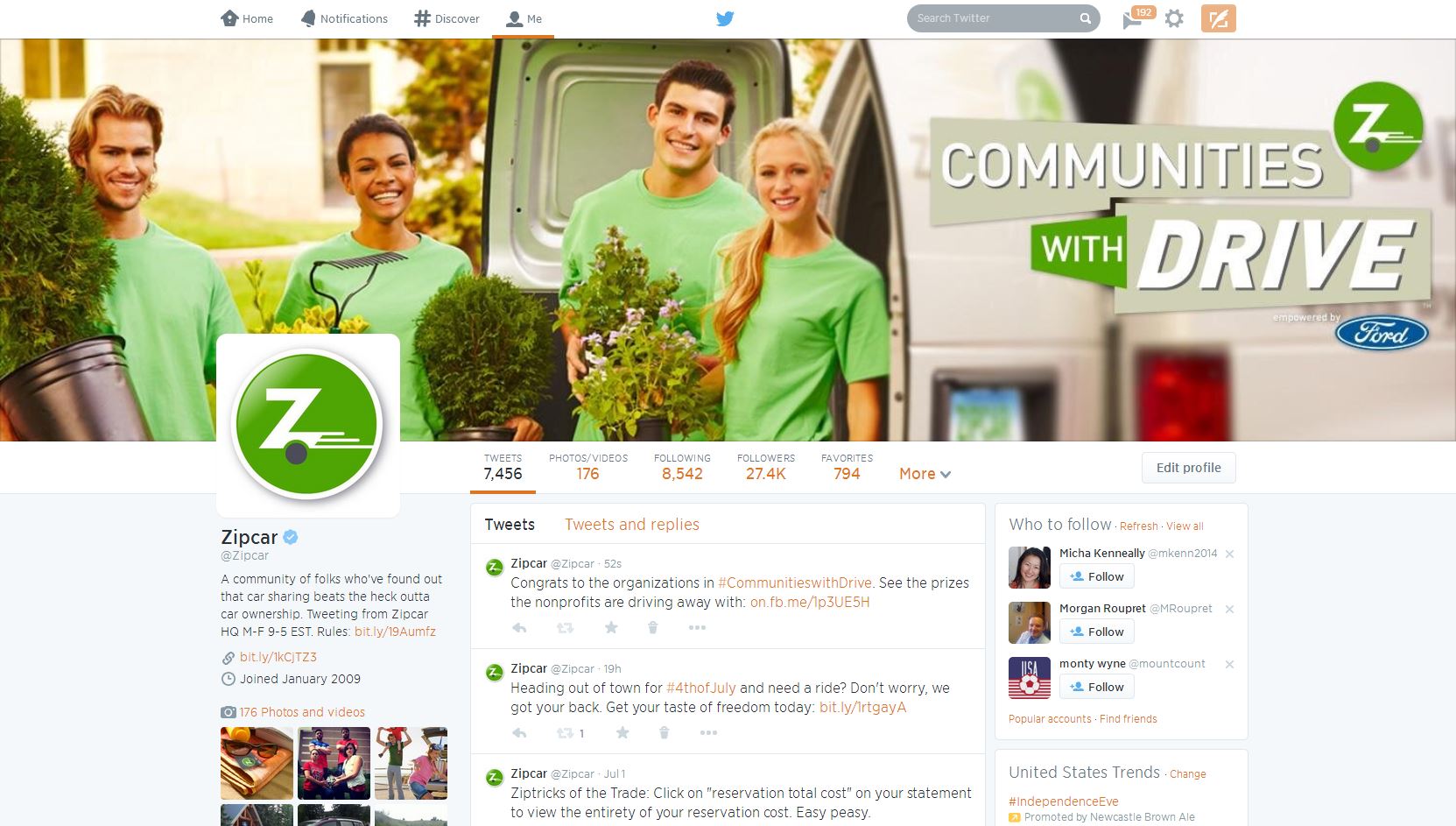 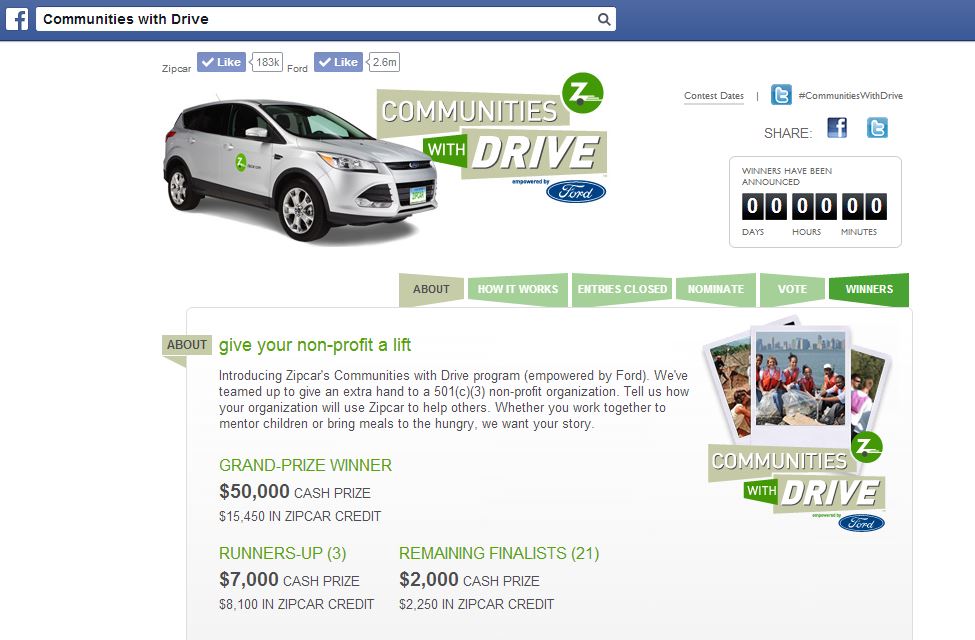 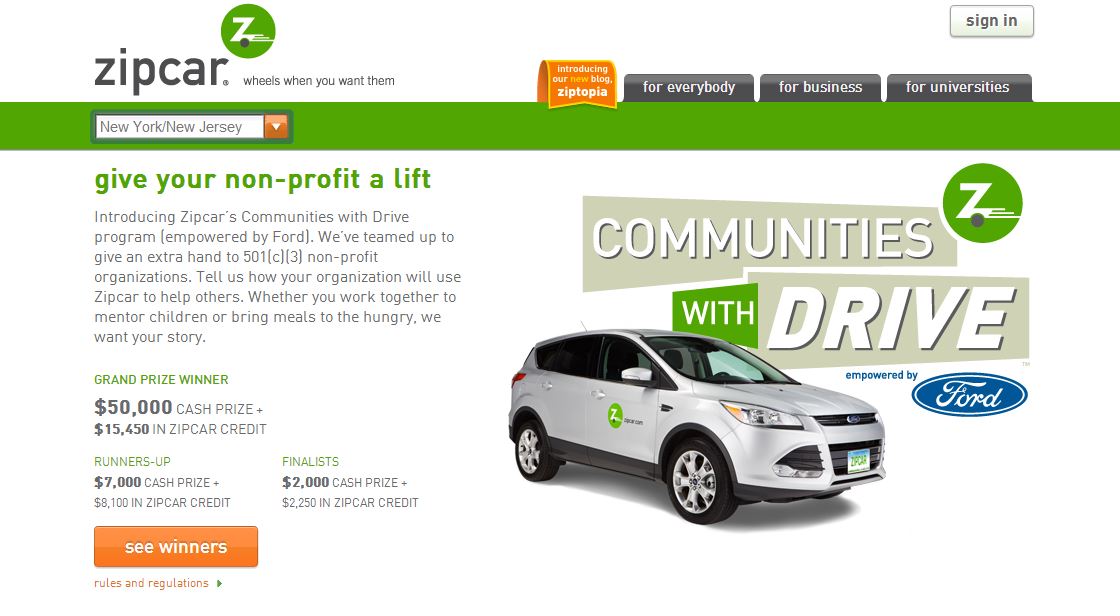 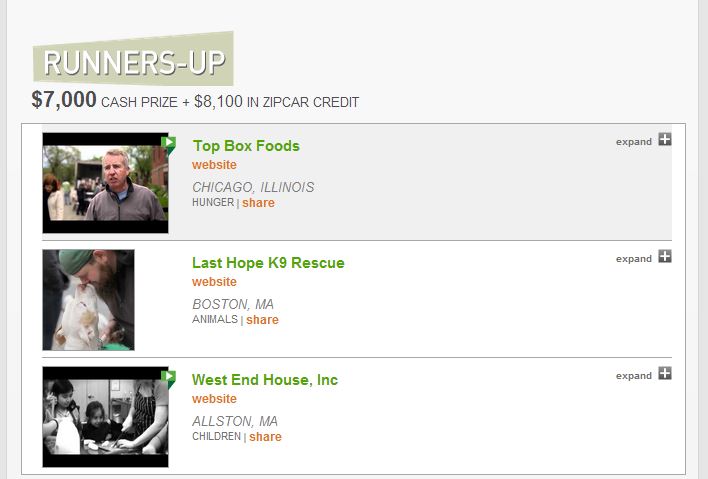