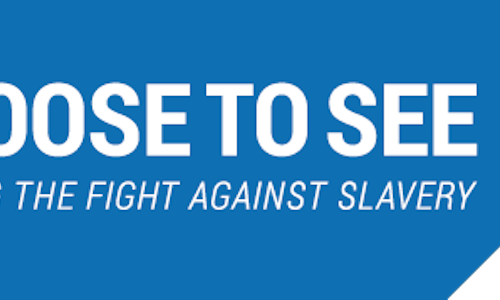 Have you ever googled the world slavery? You may be shocked at the results: there are more slaves in the world today than at any other point in human history: almost 36 million.

Slavery didn't end in the late 1800's. That's a myth. The truth is that slavery is a global, thriving and profitable business worth 150 billion dollars per year. That's more than three times Apple's profit.

5.5 million of those currently enslaved are children. They are beaten, abused, raped. Every day, children as young as five are sold on the black market at prices lower than cattle. Once in the hands of their masters, they are forced to work for up to 20 hours a day. Girls are particularly at risk, as they are the most vulnerable to sexual exploitation, one of the most lucrative forms of slavery. As you read this, children are being forced to work in brothels, mines, brick kilns, fishing boats, even hotels. They work behind closed doors as domestic labourers. Many become child soldiers, brides, and drug dealers.

Choose to see is a global awareness initiative by the Thomson Reuters Foundation, the philanthropic arm of the world's biggest news and information provider; it has been launched in partnership with End Child Slavery Week, the global campaign lead by 2014 Nobel Peace Prize Laureate Kailash Satyarthi.

The Choose to See campaign is articulated online, on TV, on social media and through delegates' participation to the Trust Women Conference, the annual event organized by the Thomson Reuters Foundation to fight slavery and support women's rights.

The powerful video is intentionally set in a Western city, to highlight the fact that child labour has no boundaries, and it features a man unaware that child slavery is taking place all around him until the end of the video, when he sees a child bride and his eyes are open, he chooses to see.

In November 2014, the video aired on CNBC Europe and Asia, and IBN India, reaching 108 million households around the world. The campaign was also featured online and on print by leading media outlets including Grazia UK and CNN-IBN.

Since its launch, Choose to See gathered worldwide support from leading personalities - including Desmond Tutu, Christy Turlington and Queen Noor - media outlets and ordinary people wishing to contribute to the global fight against slavery and human trafficking.

Choose to See is a bold campaign to raise awareness of human trafficking and child slavery, and to encourage people to take concrete action to fight the crime.

The multi-platform project is articulated online, on social media, Television and through the Trust Women conference, the yearly event organized by the Thomson Reuters Foundation to advance women's rights and fight modern-day slavery.

Through the site, people are immediately prompted to watch the powerful video, and are then given the opportunity to Discover More about child trafficking via info-graphics, news and video interviews. People are then asked to Take Action, and are given three options: to a sign a petition asking UN Secretary General Ban Ki Moon to include the eradication of child slavery in the post 2015 Millennium Development Goals; to donate to the campaign; and to Get Involved by volunteering and/or donating to some of the world's leading NGOs fighting child slavery.

Since its launch on November 2014, the petition mobilised more than 550,000 signatures. Endorsed by Nobel Peace Prize Laureate Kailash Satyarthi and the End Child Slavery Week campaign, the petition was delivered to the UN Secretary General Ban Ki-Moon early this year. Through this petition, the public is taking action and putting child labour at the top of the political agenda by urging the United Nations and its Members to adequate resources to the prevention and eliminations of child slavery.

In taking part in the Choose to see campaign, people can push for change by sign a global petition calling for the eradication of child slavery to be included in the post 2015 Millennium Development Goals. This would make ending child slavery a priority in the future of the development agenda. Without the abolition of child labour, many of the development goals including universal education, poverty reduction and gender equality cannot be achieved. Including explicit language about child labour in the MDG would be a concrete step to end child slavery and make the international community commit to put a stop to this serious crime.

Since the launch, people from around the world joined the discussion on social media and helped us spread the word about the issue of child slavery. On social media, leading media outlets, NGOs, high-profile personalities including Desmond Tutu, Christy Turlington and Queen Noor took a stand against child slavery by taking part in Choose to see.

We believe this campaign has helped raise awareness on the pressing issue of child slavery by reaching a worldwide audience through social media and other media channels including television. The campaign is compelling and pushes people stop turning a blind eye to child slavery.

Video for Choose to see 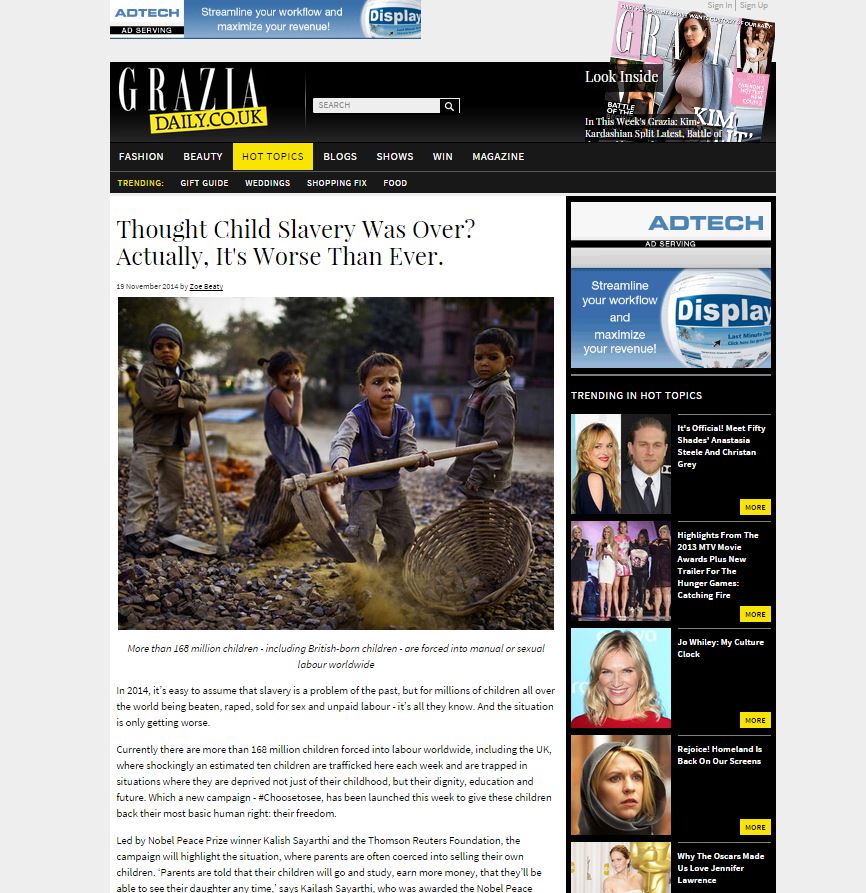 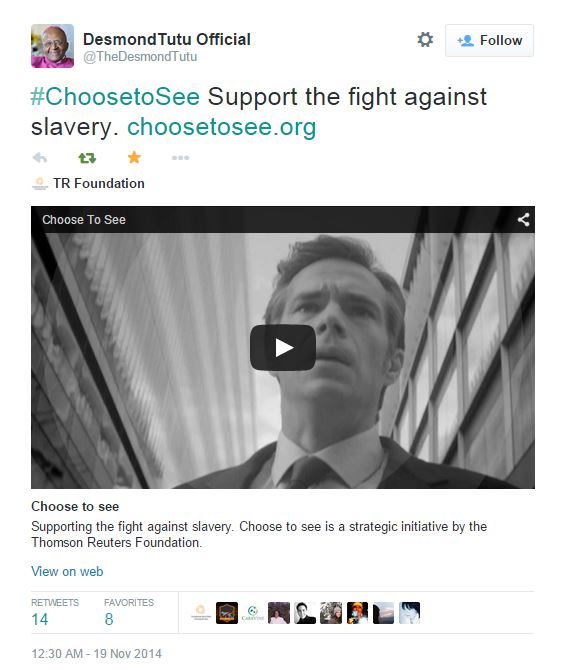 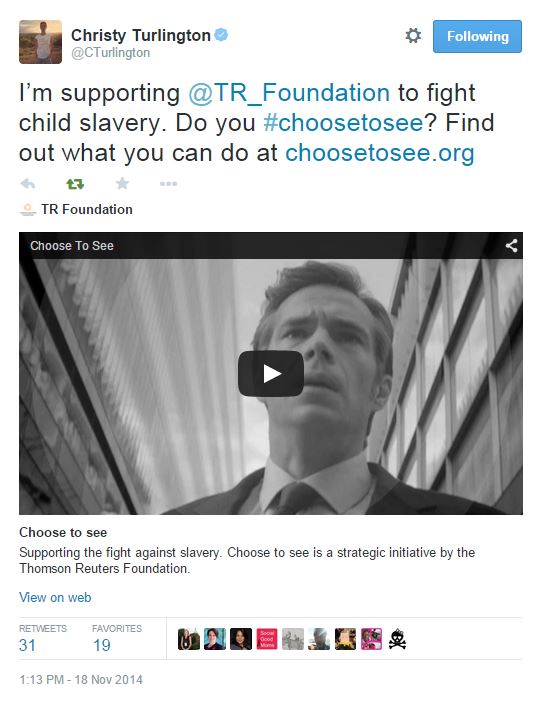