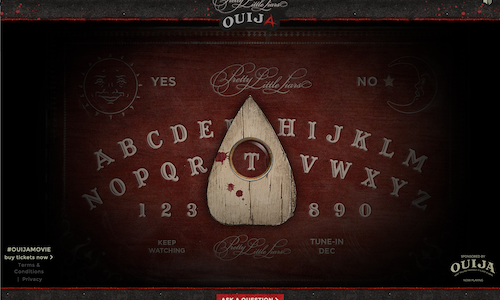 Phase one of the campaign was designed to build buzz about and fan excitement for Ouija by debuting the full-length trailer exclusively on Pretty Little Liars' facebook page, which has over 14 million fans.

Phase two inserted the physical Ouija board into a pivotal scene of Pretty Little Liars followed by a 60-second "first look" at the film. To tap into the super-social nature of Pretty Little Liars fans, a custom hashtag, #WatchOuija, was featured throughout both of the integration and "first look" to encourage fans to spread their excitement about the movie in social media.

Phase three included a custom social experience at PLLOuija.com that engaged fans within a Ouija-branded environment, fed excitement for the release and finally, drove ticket sales to see the movie in theatres.

ABC Family and Ouija's three-phase, custom promotion, along with Ouija's other marketing efforts, made Ouija #1 at the box office opening weekend.

ABC Family and Universal Ouija's three-phase campaign successfully tailored Ouija content across social, linear and digital channels to deliver on campaign objectives: building awareness of and excitement for Ouija and driving ticket sales to see the movie in theatres. The campaign built buzz for the film from the ground up, encouraged viewers to share their excitement and spread the word in social media and featured a social experience where fans could deeply engage with both Pretty Little Liars and Ouija and buy tickets to see the movie in theatres. Each phase delivered impressive results and built upon each other to the ultimate success of Ouija opening #1 at the box office.

Phase one of the campaign consisted of a never-before-done release of Ouija's full-length trailer. It debuted natively to Pretty Little Liars' Facebook page, giving the series' fans a 24-hour exclusive. Facebook was strategically chosen for this trailer debut (vs. on-air or microsite) because it is a top site for short form video, has massive reach and provides ease for sharing among friends to generate buzz.

Phase two of the promotion was an in-show integration in Pretty Little Liars with the physical Ouija board from the movie featured during a pivotal scene.

Organically inserting Ouija into the series was the ideal way to get fans invested and to spread excitement about the movie. And the results paid off - #WatchOuija trended #1 on Twitter in the U.S. and worldwide following the "first look."

- #WatchOuija trended #1 on twitter in the U.S. and worldwide following the exclusive 60-second "first look."

Phase three of the campaign was a custom social experience at PLLOuija.com that engaged fans within a Ouija-branded environment, fed excitement for the release and drove ticket sales to see the movie in theatres.

The app was live the entire month of October - the month Ouija hit theatres. Fans could ask questions that were answered with the Pretty Little Liars Ouija board and they could also move the planchette to reveal exclusive content, which always performs extremely well with ABC Family fans. The content was staggered throughout the month to continue to drive engagement and one week before the movie's release (Oct 24) the app drove to ticketing to see Ouija in theaters.

Best of all, this three-phase custom promotion delivered on Ouija's objectives of building buzz for the movie and driving ticket sales – Ouija was #1 at the box office opening weekend. 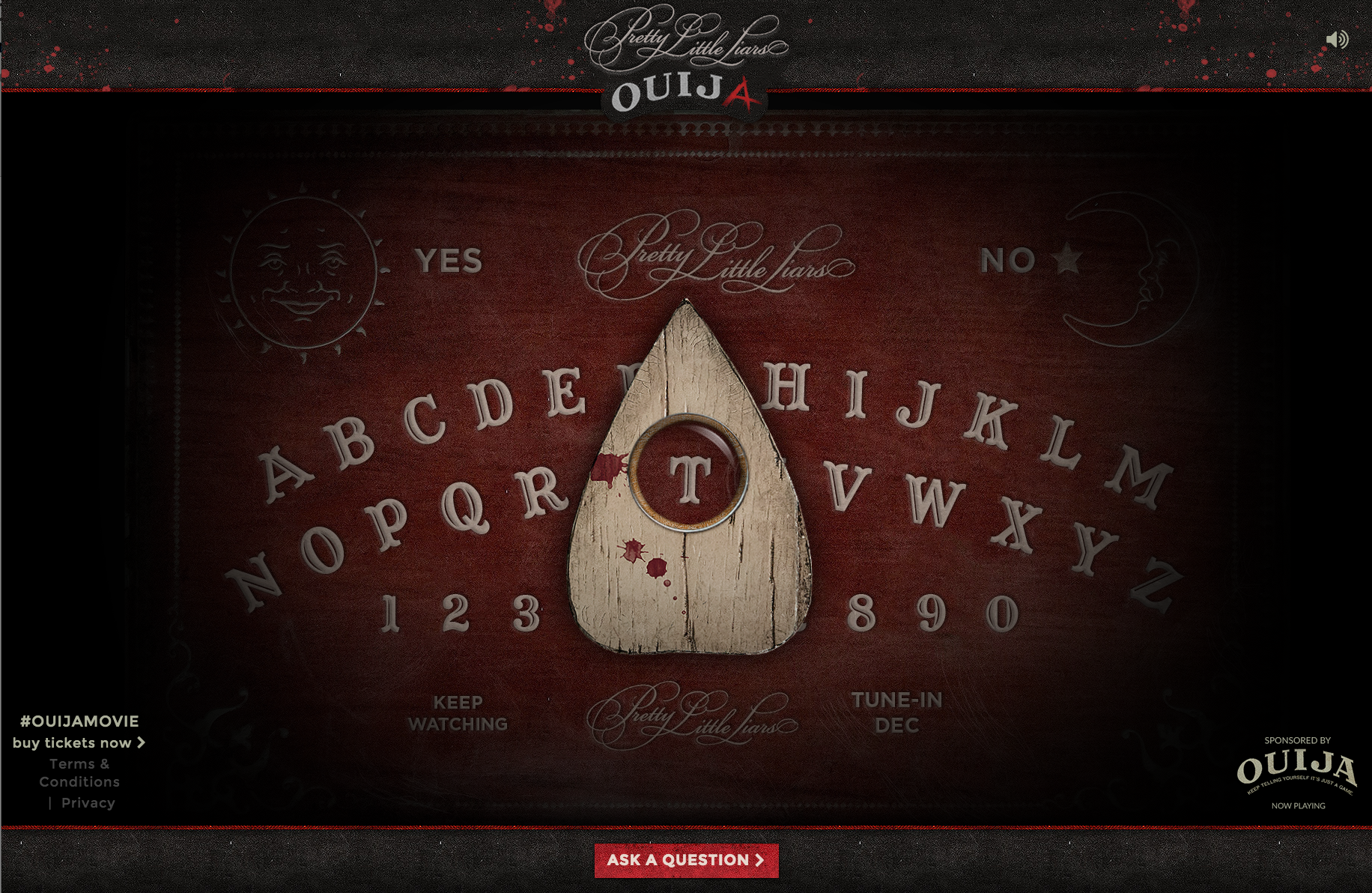