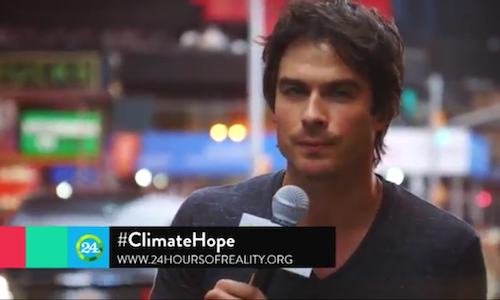 At The Climate Reality Project ("Climate Reality"), we know the messenger matters just as much as the message when it comes to reaching new audiences. Guided by this belief, we work with celebrated cultural icons to serve as trusted messengers to communities beyond traditional environmental groups.

For this initiative, we sought to leverage the media profile of a celebrated actor and climate activist (Ian Somerhalder) when he was in the news in association with Climate Reality, actively engaging his extensive fan base on social media in order to promote our message of #ClimateHope and our 24 Hours of Reality media event to a new global audience.

After a photograph of the actor holding a Climate Reality microphone generated significant buzz within his fan community in September 2014, we saw an opportunity to expand awareness of 24 Hours of Reality and our #ClimateHope message. We created a suite of graphics and tweets incorporating Somerhalder's name and image along with our #ClimateHope hashtag and shared them with highly influential fans to use, serving as trusted messengers to other fans and their social networks. Following 24 Hours of Reality, we continued to engage this community with special graphics and tweets at moments when millions of fans were watching and discussing the actor, such as the fall premiere of Somerhalder's show The Vampire Diaries.

The initiative enabled us to share our message of #ClimateHope with a major new audience group and engage them in action for solutions, resulting in our widely shared social media posts ever.

Climate Reality's Cultural Messenger Initiative demonstrates how an organization can adapt the marketing dictum to know your audience for the twenty-first century by creatively using social media to quickly and effectively connect the right message with the right messenger at the right time to inspire action.

At Climate Reality, we work to share the truth about climate change and how we can solve it with mainstream audiences. As part of this effort, we work with celebrated cultural icons who open doors and act as trusted messengers to their communities and fan bases, enabling us to raise awareness of the issue and drive action on solutions far beyond traditional environmental constituencies.

Guided by this approach, we partnered with the actor and climate activist Ian Somerhalder in the summer 2014 to film a series of video shorts on climate action called "The Green Man on the Street," to be featured in the global media event 24 Hours of Reality: 24 Reasons for Hope taking place that September. By using Somerhalder as a spokesman for climate action, we aimed to bring 24 Hours of Reality's message of #ClimateHope to the actor's fans and other new audiences.

In August, a photograph of Somerhalder holding a Climate Reality microphone appeared in an unrelated article that generated widespread interest and discussion among the actor's fan base. By monitoring social media, we knew that fans were curious about the actor's connection to Climate Reality and wanted to know how they could see "The Green Man on the Street."

The next step was to translate fan interest in "The Green Man on the Street" into visibility for the 24 Hours of Reality program. We knew the message about 24 Hours of Reality would spread further and faster within the fan community if Somerhalder's fans were spreading it themselves. To accelerate this process, we identified and reached out to influential fans with significant social media followings with special graphics and social media using Somerhalder's name and image along with our #ClimateHope hashtag, all created uniquely for them. These fans then used these assets to alert other fans to how they could watch "The Green Man on the Street" and support Somerhalder's work by participating in 24 Hours of Reality on September 16—17 and sharing the #ClimateHope hashtag with their own social networks.

Momentum kept growing within the fan community and the day before 24 Hours of Reality, one fan campaigned on social media – successfully – to organize a worldwide trend:

Our Tweets about Somerhalder were retweeted by Greenpeace International, the Ian Somerhalder Foundation, and Somerhalder-related fan Twitter Accounts (Vamp_Diaries with 1/2 million followers, Tvdfansonline with 300,000 followers, and VD_VAMPDIARIES with over 16,000 followers).

After the 24 Hours of Reality event, we sent a follow-up graphic to Somerhalder's fans thanking them for their support for #ClimateHope and the worldwide trend. Fans responded by posting the graphic and then tweeting his video again with #ClimateHope.

We then posted "The Green Man on the Street" video on our Facebook page to connect with the premiere of Somerhalder's show The Vampire Diaries. We tagged the post with #TVD, and generated the highest number of impressions in the history of our organization.

By listening to Somerhalder's fans, drawing on their passion for his activities, and creating strategic social media assets, we were able to enlist thousands of these fans in helping us promote both 24 Hours of Reality and our #ClimateHope message. The result was a successful campaign that reached hundreds of thousands of audience members new to climate issues and – critically, led them to take action. 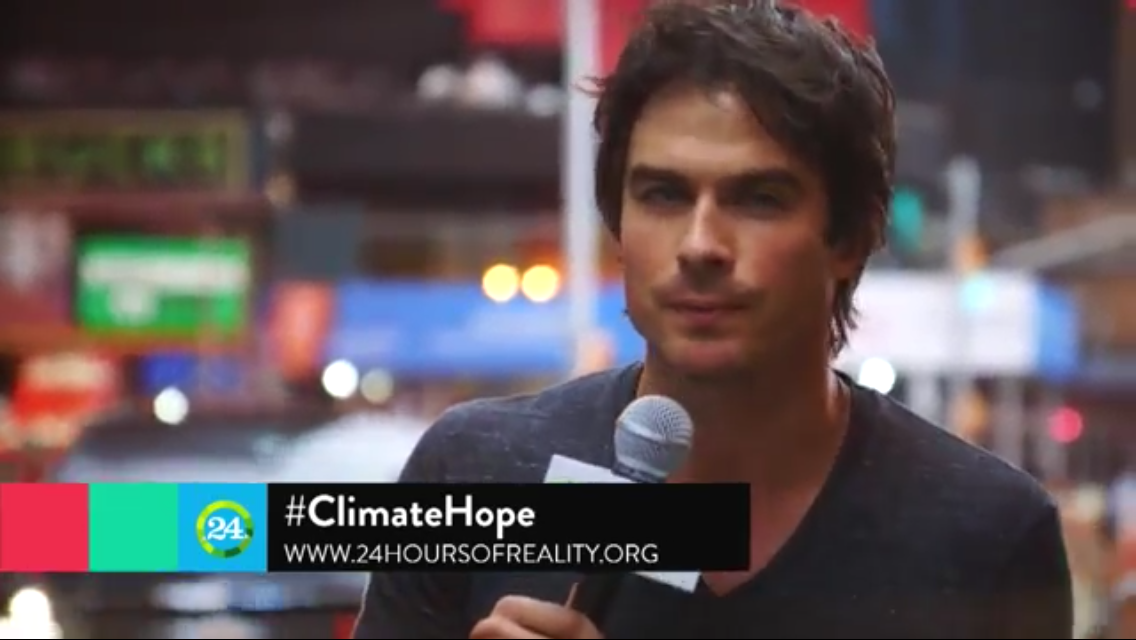