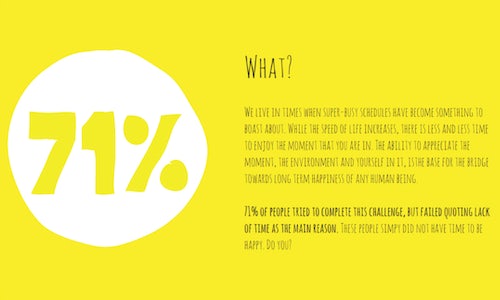 100happydays is a global social movement of people who believe that happiness is a matter of personal choice. They all embarked on a personal challenge to find the answer to the question: "Can you be happy for 100 days in a row?" Using social media as a personal gratitude journal, the 100happydays challenge combines modern passion and growing trend towards mobile photography together with scientifically proven benefits of mindful living, leading to a real positive change in personal well-being.

Participants registering for the challenge are constantly encouraged to find at least one little thing that made them happy on that day; to upload the picture to social media with #100happydays hashtag; and to do it for next 100 day in a row. While participants also had a chance to keep the challenge private, the social sharing aspect motivated to stick until the end of the challenge and to inspire more people to choose happier living.

The 100happydays challenge started in fall 2013 by a single individual who tried to find happiness in his life by appreciating what he had; but happened to help the whole world in stead. It was almost like a Forrest Gump run - started alone, by day 7 - with 50 people, by day 30 - there were tens of thousands. Until today, there are more than 2 million people who took the challenge in over 190 countries in the world and captured over 23 million happy moments on instagram only.

The main reason why #100happydays hashtag should win a Shorty award lies in the combination between its worldwide reach, its high user engagement and its power not only to generate awareness, but to drive real life and behavioral changes.

c) The challenge was picked up by celebrities from Hollywood to Bollywood and by major global news outlets - from NBC News to Huffington Post.

c) Unlike other major campaigns, the challenge achieved success not only across traditional social media platforms - Facebook, Instagram, Twitter and Tumblr - but also local ones such as Weibo and VK.

d) By now people from over 190 countries in the world have registered for taking the challenge at least once, which makes it a truly global campaign.

a) To allow the hashtag reaching furthest corners of the world, the users were enabled to crowd-translate the website into their native language. As a result, the website is currently available in 66 languages and dialects from minority languages in South East Asia to imaginary languages like Pirate language. In total, users have spend over 5000 translation hours on the website.

b) The challenge has a significant retention rate: 87% of asked participants have responded they would take the challenge again this year, while the majority of the rest admitted they continue using #100happydays hashtag on occasional basis to mark their happiest moments. Unlike other hashtags, the geographical spread of #100happydays is still high even one year later. At the moment, the hashtag is being used in over 110 countries across the world.

c) Is there a better way to test the strength of the concept than if the challenge can make a difference on the engagement of a different brand? When TODAY Show took the challenge on behalf of the show, their Facebook post engagement more than doubled comparing to that of pre-Superbowl coverage (to be specific, +135% in Facebook likes & +104% in overall social engagement).

d) Back in the days Harley Davidson was used as a case study of brand engagement because their customers were making tattoos of their logo. How about tattoos of the life-impacting hashtag #100happydays? We have seen that as well.

3. Transformational use of the hashtag:

To understand if the hashtag actually leads to any changes in subjective well-being, we have asked participants to evaluate how happy they have been feeling lately. On a random basis, we send check-in messages to evaluate the progress during, at the end and after the challenge. Collected data suggested that participants who finish the challenge are on average 19% happier than in the beginning of the challenge, while the effect remains statistically significant up to 3 months after the challenge is completed. This result challenges the common perception of the hashtag use as a simple awareness tool and shows a case study how hashtags can shift user behaviors to bring positive change for both individuals and the society. 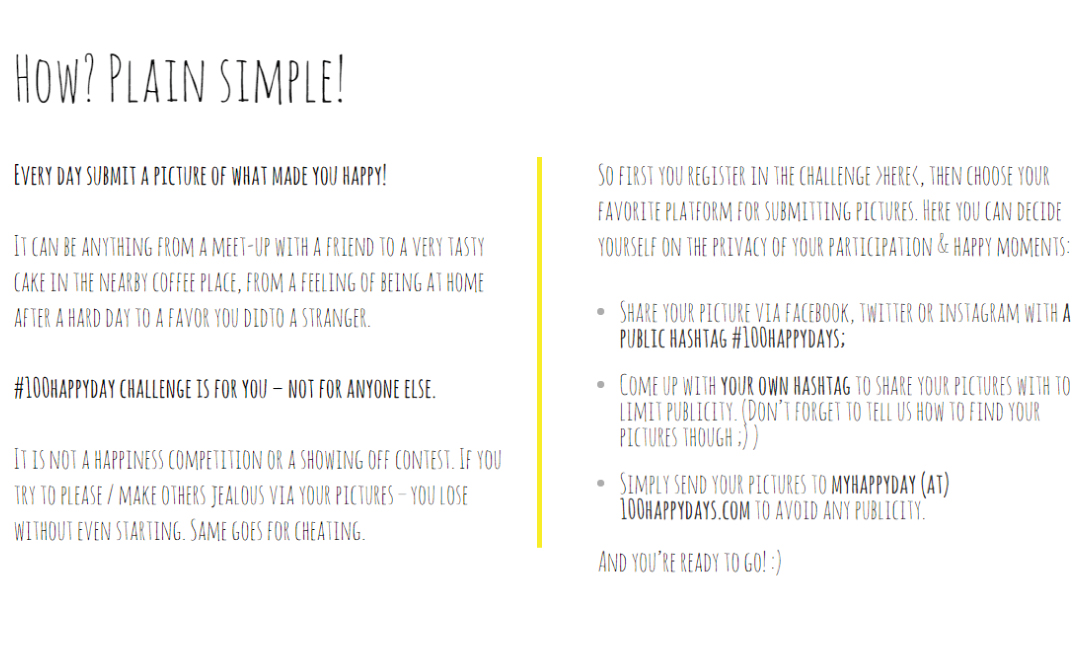 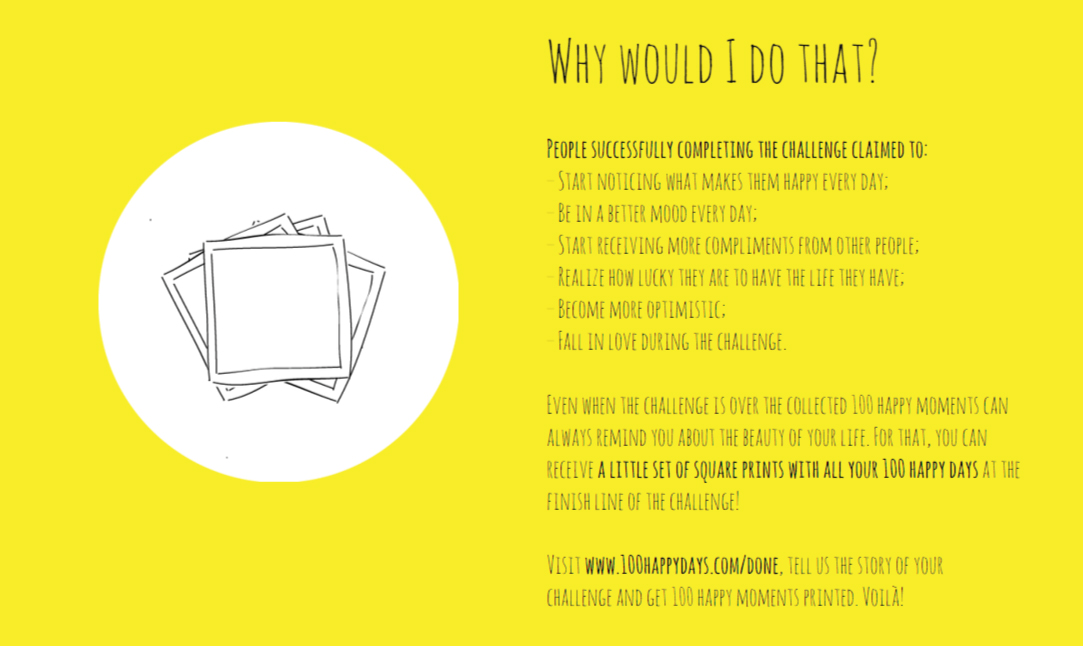 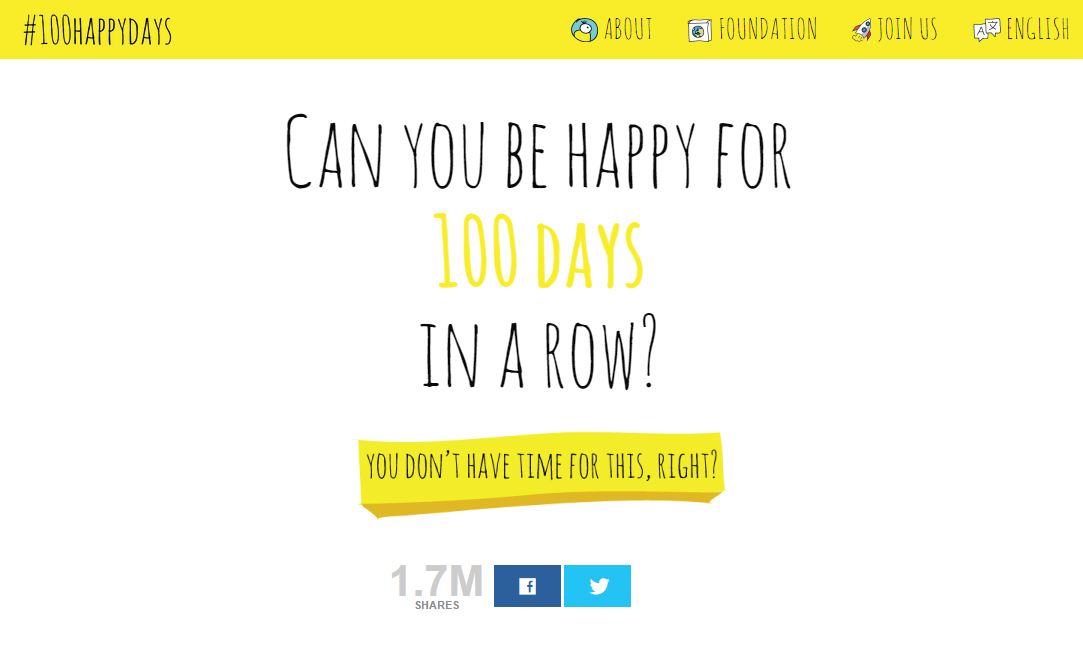 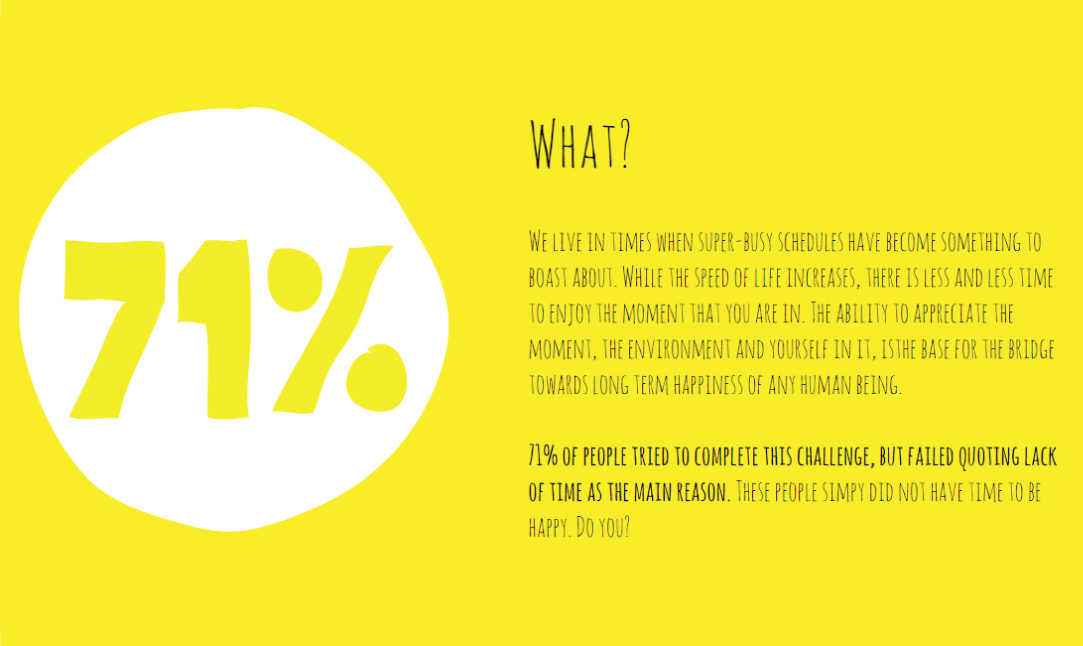