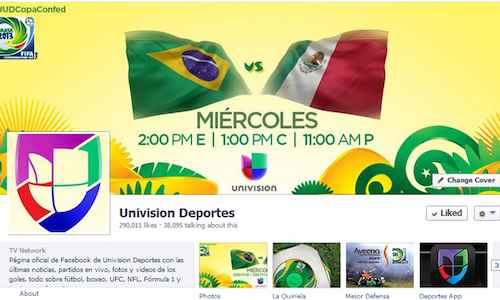 In the summer of 2013, Univision Deportes sought to create a unique experience in soccer utilizing Facebook and a fully interactive environment, positioning Univision Deportes as the ultimate summer soccer destination. The FIFA Confederations Cup and the CONCACAF Gold Cup were the leading soccer tournaments which served to anchor the series. Facebook integrations included pre- and post-game updates, calls to action asking fans to submit photos showing their passion for their favorite national teams and a unique match predictor Facebook app, called ‘La Quiniela.’ During the Conferations Cup, The Deportes Facebook account grew its fan base by +25% during the three weeks of the tournament alone. The page generated 21.6M content impressions during the month of the tournament, representing +212% growth. User Engagements (Likes, Comments, & Shares) grew +408% over the same period. During the Gold Cup, The Deportes Facebook account grew its fan base by +12% during the four weeks of the tournament. The Facebook page generated 22.6M content Impressions during the month of the tournament and over 835K user Engagements (Likes, Comments, & Shares). Leading Univision’s innovation around this series was the Deportes’s La Quiniela (The Predictor) Facebook program, which was an application that allowed users to predict the outcome of the FIFA Confederations Cup. Univision Deportes launched “La Quiniela" app to provide fans with unprecedented access to participate in the road to the Confederation Cup by placing them front and center and allowing them to gauge the results of all matches in the tournament. Users collected points for participation and also for correctly predicting the results of matches. They were able to choose their favorite country, within those participating in the tournament, and receive special rewards the app had prepared for them. Fans competed against their friends and boasted about who was the most knowledgeable football fan. The app was free to users and allowed them to share their predictions for tournament matches. The U.S. Hispanic population is largely underserved on Facebook, yet this group is exceedingly engaged in social media across all platforms. This imbalanced element of media is not only inequitable, it also represents an untapped market for advertisers and media in general. “La Quiniela" app targeted a highly specific group of U.S. Hispanics who are Spanish-language dominant, interested in Soccer and are of Central & South American decent. Most effective in “La Quiniela" app, was the highly targeted match-specific promoted dark posts, which drove engagement rates many times beyond the Facebook average, a key factor in program performance. Also, different ad types served different needs – photo posts drove engagement, link posts drove url clicks and like ads drove page fanning. Integration of other promotional platforms (broadcast, web, etc), coupled with focused fan drive and user activation activities also enabled organic fan engagement well above the Univision Deportes norm. The “La Quiniela" program on Facebook yielded an impressively high return rate of user participation, given the spending for the program was much lower than average. In fact, by the end of August 2013, 630K total engagement had been reported. 14k of those users pledged allegiance using the app, going on to generate 37.5k+ match predictions and 28k social share actions. Twenty-five percent of users returned to the app to make multiple predictions, contributing significantly to overall application performance. The app generated a total of 657k social impressions, driving 3.9k friends-of-users back to the application and creating 25,293 newsfeed stories. 6 percent CTR from hyper-targeted dark posts outperformed the Facebook benchmark by 6X. 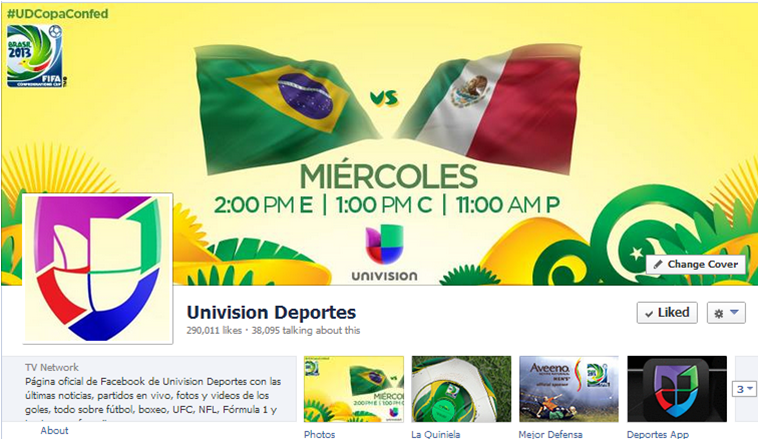