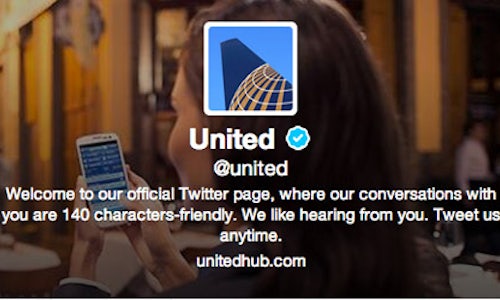 United Airlines’ Social Operations team assists travelers across the globe in near-real time on Twitter. Over the busy holiday travel season, from Thanksgiving through New Year’s 2014, the team averaged 6,000 interactions daily, and maintained a 99.5% response rate to those @united mentions and direct messages requiring a reply from the airline. Using the Radian6 Engagement Console, tweets are identified and assigned by a team of frontline representatives who then assist the customer directly, assign the customer to a reservations agent or escalate to Social Operations Community Managers. Given the wide range of customer needs—from ticketing, check-in and boarding information, baggage claims questions, and upgrade and status questions from MileagePlus members—and the time-sensitive nature of those needs, the team operates twenty-four hours a day, every day of the year. United aims for a 30-minute-response-time service level, but the primary focus isn’t on speed—it’s about providing a solution for the customer within the Twitter platform, rather than directing that customer to another channel, like a call center. It’s this ability to provide real solutions via Twitter that drove airfarewatchdog.com to grade United’s Twitter customer service with an “A-," saying that team representatives are “eager to reach a resolution." In addition to assisting travelers on the fly, the Social Operations team uses Twitter to give followers deeper insight into what happens behind the scenes at the airline. Recent tweetchats, using the hashtag #unitedplanechat, have brought our coworkers from flight scheduling and airport customer service onto Twitter to answer customers’ questions about everything from aircraft types to insider travel tips—helping lead Dachis Group to call our audience the “most actively engaged" of any airline. At its heart, this is a comeback story. Airlines and other brands in the travel industry have historically been leaders in social media, particularly customer service. But for many years, United was not one of them. Looking back just a short 18 months ago, Twitter customer service from @united was described by one follower like this: “In @united Twitter space, no one can hear you scream." — @john_holl Indeed, in the summer of 2012, having just completed the largest IT project in aviation history—migrating the legacy United Passenger Service System (PSS) to Continental’s SHARES PSS—United was not overly focused on Twitter as a customer service channel. In fact, the @united handle was tweeting an average of just three times per day, and the response rate to customer service questions was a paltry 3%. Sentiment was extremely negative, with followers tweeting reviews like: “good luck getting @united to respond to you - they are less than prompt to responding to needs on twitter!" “Does United have a Twitter handle that will actually respond to people? Looks like @united is just for PR" and “I'd rather no twitter account at all than an @united black hole" The bad news was, these followers were right. The good news is, despite the lack of engagement, United was listening, and would soon take action. A dedicated social media team was put into place, with frontline triage and reservations agents soon responding to many more customers’ needs, including booking and rebooking travel via direct messages. Twitter platform listening and engagement tools like Radian6 helped make these interactions more efficient, while tracking customer outcomes. KPIs including service levels, response times and social customer satisfaction surveys were put in place to measure success. From the start, the focus was on providing solutions, not just responding quickly to a tweet and redirecting customers to another channel. Digital agency Wunderman helped develop a “social media playbook" to empower frontline reps with the knowledge and tools needed to provide exceptional customer service on Twitter. Twitter response rates would eventually approach 100%, with an overall average for the last six weeks of 2013—a period of high passenger load factors during the holidays—at 99.5%. Positive sentiment on tweets mentioning @united have increased more than threefold over this period. According to the most recent customer satisfaction survey, 33% of customers were “extremely satisfied" with their Twitter interactions with United. Instead of a “black hole," comments like these are now becoming routine: “Let it be known that @United is now delivering top-shelf customer service through twitter." — @justinpa “Really great customer service from ^KP on the @United social media team today. Thanks so much." — @chrisguizlo and “Still not happy that @united canceled my flight, but WOW - great customer service over twitter to get rebooked. THANKS! #customerservice" No, we might not be able to control the weather via Twitter, but we can make the skies a little friendlier. 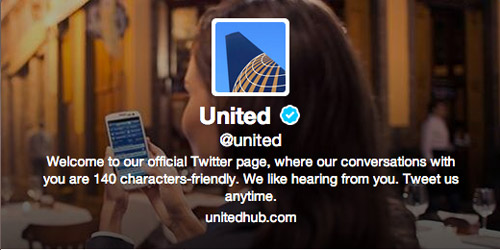