To “turn" True Blood’s core fanbase into evangelists for the show’s return, we launched #ShowYourFangs, the anchoring convergent promotion of the season 6 campaign. After kicking off the campaign with an on-air tease, which laid the groundwork for the threat of vampire extinction, we asked fans to “come out" in solidary with vampires. Truebies were given instructions to Instagram pictures of themselves holding up their fangs (e.g. triangles drawn on their index finger). Simple and addictive. Thousands of pictures flooded showyourfangs.com, a photo wall hosted on HBO Connect. The campaign culminated in “#TrueBlood: Live from the Set," the social-fueled pre-show to the season premiere, when #ShowYourFangs entrants got their figurative place in the sun. For the first time ever on HBO, we superfans on-air for showing their fangs in their Twitter avatar, showing our love for the fans showing their love. http://instagram.com/p/Zswgl4JXwb/ Taking the popular “selfie" behavior on Instagram and pivoting it into a social activation, we ignited Truebies in photo-sharing for vampire solidarity. The behavior spread like wildfire, with the core fanbase sharing photos right alongside True Blood’s own vampire talent, such as Kristin Bauer van Straten (Pam), Michael McMillian (Steve Newlin) and Amelia Rose Blaire (Willa Burrell). Other celebrity fans such as Olivia Munn (“The Newsroom") and Shane Smith (Vice) shared their own photos. This promotion’s simplicity in execution led to widespread adoption, with Mashable noting #ShowYourFangs as amongst “a fresh dose of interactive online goodies" that True Blood offered in support of season 6. We succeeded in taking the serious themes of the storylines and making them social; turning the dark tone into something playful and irresistibly interactive. 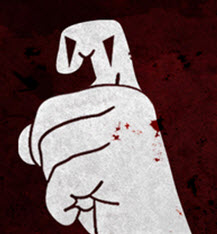