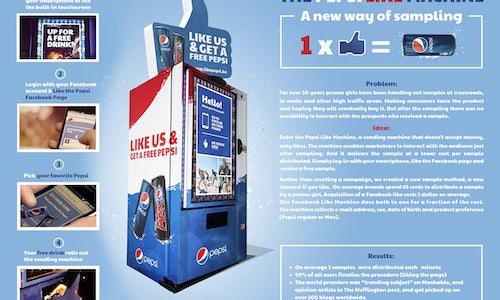 For over 50 years promo girls have been handing out samples at intersections, shopping malls and other high traffic areas, hoping consumers would buy their products. Time for a change, so Pepsi and TBWA Belgium teamed up and created The Like Machine: a vending machine that doesn’t accept money, only Facebook likes. This innovative idea is simple. Just use your smartphone, go to likepepsi.com, like the Pepsi Facebook page and get a free Pepsi. By using the smartphone location settings, Pepsi was sure only people near the vending machine got offered a sample. People without a smartphone could tap the 46" built-in touchscreen to log in on Facebook and get a free drink as well. Now it is possible, with a Facebook like, in real time, to get a can of Pepsi. It’s a new way of sampling, which provides brand with information, so they can immediately start communicating with their target audience. Furthermore it is entertaining and engaging for people who interact with the machine. Pepsi Belgium introduced the Like Machine at the Beyoncé concerts in Antwerp. Case video: Creative approach: Pepsi and Coca Cola still sample at intersections. However today, this is not the best way to build a brand’s relationship. There's no engagement by the consumers. By creating the Pepsi Like Machine, a machine that only accepts Facebook likes instead of money, you create much more. It makes it possible to build a relationship on Pepsi’s FB page with anybody who received a sample from the social vending machine. Innovation: The idea is simple, you use your smartphone to connect to Facebook and like Pepsi’s FB page. In return a sample drops out of the vending machine. Ideal for Pepsi’s target audience of 16-25, who almost all own a smartphone. However creating the machine was more complex. Node.js (serverside tech) was used to enable seamless realtime communication between the vending machines, our webserver and the user's Mobile phones. After prototyping this unique concept intensively, we made it possible to drop a sample within a second by a command on your smartphone. Engagement results: On average brands spend 65 cents to hand out a sample by a promo girl and 3 dollars to recruit a Facebook fan. A cost you eliminate with the Pepsi Like Machine. The machine was first introduced at the Beyoncé concert in Antwerp. On average 3 samples were distributed each minute. The magical moment when you chose your Pepsi and it automatically drops, made it entertaining and engaging. This world premiere got coverage on Mashable, The Huffington Post, TNW and over 300 other national and international blogs. 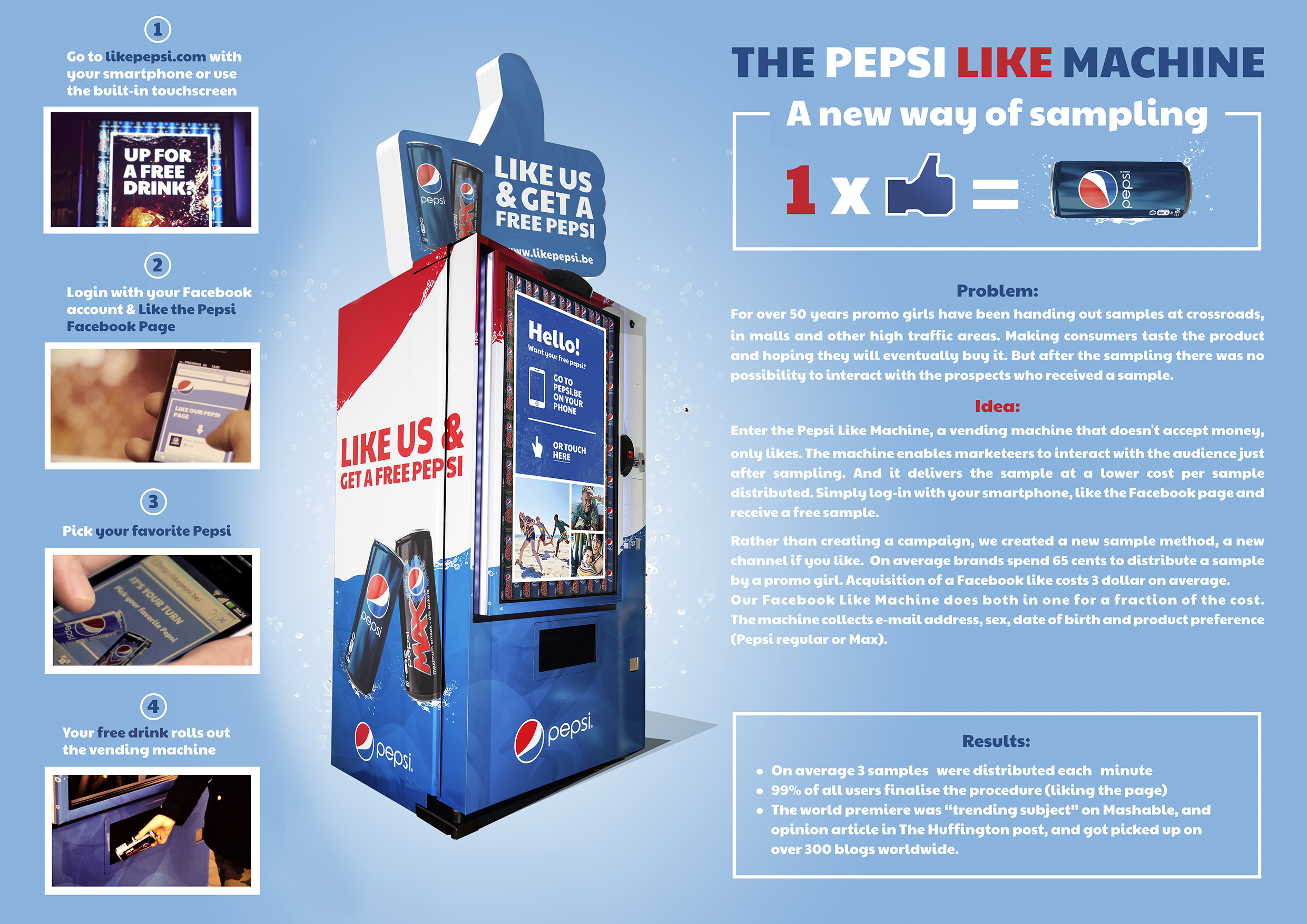