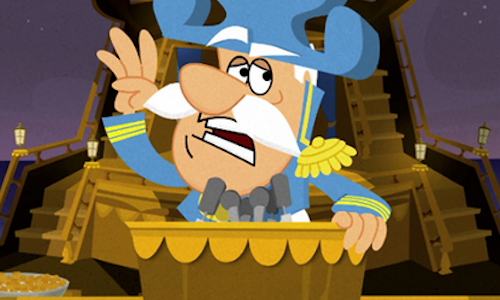 The Cap’n Crunch brand wanted to find a way to engage with consumers (primarily men) in their 20s and 30s, who often eat the cereal as an afternoon or late-night snack, rather than for breakfast. Huge partnered with the brand to relaunch Cap’n Crunch’s social presence and create more online conversation around the brand through social media. Understanding that the target audience spends much of their time online watching and sharing videos, Huge capitalized on that behavior and gave the Cap’n his own late-night talk show on YouTube. The Cap’n Crunch Show is an animated series where the Cap’n himself sits in a bowl of milk and Crunch (yes, that’s right) on the deck of his ship, the S.S. Guppy, and hosts a wide range of celebrities from absurd fictional characters to legendary Burt Reynolds. The show is hosted on YouTube and promoted through all of the social channels. Throughout the first season of The Cap’n Crunch Show the team managed the entire process including concepting, script writing, character design, animation, and talent outreach. Season 1 consisted of nine total animated episodes: three celebrity episodes, four fictional celebrity episodes, one teaser/promo, and one real-time response. The real-time response marketing opportunity was the Cap’n Crunch Show’s greatest success thus far. In June 2013, a Reddit user posted an image on Reddit.com pointing out that although U.S. Navy captains have four stripes on their uniforms, Cap’n Crunch only has three and therefore was not a real captain. As this news spread through Reddit, the blogosphere and social media, the Cap’n’s team jumped on the opportunity to get involved in the real-time marketing opportunity. The Huge team’s immediate tactical plan was to monitor the chatter about the controversy on social media and craft clever, customized responses to the tweets about it, defending the Cap’n’s good name. The team expected the hubbub to blow over within a few days to a week and wanted to capitalize on the momentum as quickly as possible, in order to maximize the conversation and keep it going for as long as possible. The Cap’n’s response tweets to fans, media outlets and journalists caught the attention of both the Twittersphere and the mainstream media on a mind-blowing scale. Once the conversation and media coverage had reached an international scope and appeared on several major national news outlets, the Huge team was able to work with the brand to allocate additional budget to produce an animated response video on the YouTube channel showing the Cap’n responding to the fraud claims. The team worked rapidly to script, record and produce the response video to make sure it could go live before the hubbub died down. With the help of Olson, Quaker’s public relations agency, additional media outreach about the Cap’n’s official response was conducted, which resulted in an entirely new round of coverage that showed the response video on top-tier TV and online outlets around the country. Within the first five months, the new platform Huge built within YouTube to act as the stage for the new Cap’n Crunch Show has garnered 1.3MM views and 2.1K subscribers. Furthermore, the Cap’n’s viral uniform controversy has undoubtedly been the account’s greatest success to date, causing an international media firestorm both online and off. His response video on YouTube was viewed more than 53,000 times in less than a month and received over 380 YouTube “like"s. In a once-in-a-lifetime PR boom, the story generated more than 525 mainstream media mentions of the controversy in print, online, radio and television outlets, many of which quoted or showed screenshots of the Cap’n’s hilarious Twitter responses and/or the Cap’n’s response video. Coverage appeared on several top-tier national TV outlets, including The Colbert Report, Good Morning America (twice!), Late Night With Jimmy Fallon, Conan, The Tonight Show With Jay Leno, Anderson Cooper 360 and more. All told, the controversy resulted in more than 689 million mainstream media impressions and roughly 170 million social media impressions within just one month, resulting in an unprecedented, purely organic ROI of $0.05 CPM, with absolutely zero paid media. 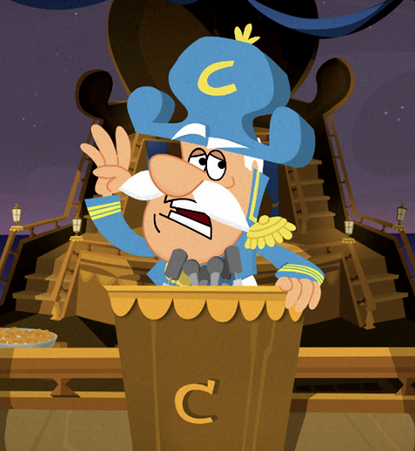