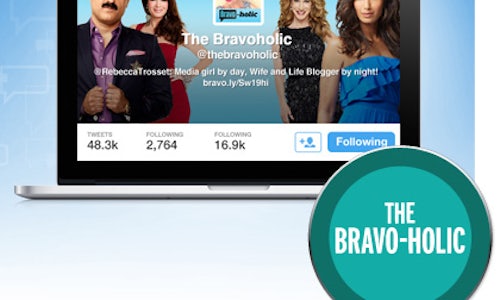 On a weekly basis, Bravo culls through fan tweets to pinpoint a “Bravoholic of the Week." The weekly Bravoholic is a social media superstar who avidly tweets about Bravo and embodies the Bravo voice. We award our winner their “fifteen minutes" by giving them control over @TheBravoholic for the week, officially crowning them our digital correspondent – a social media ambassador for the network. In addition to social media superstardom and access to engagement with our most passionate fans and talent, each winner receives the following perks: a question answered on our late-night show, “Watch What Happens Live," a personal shout-out from @Bravotv’s twitter account, mention in an on-air snipe, and a Bravo swag bag.As an innovative television network that puts social media at the forefront of its marketing efforts, Bravo strives to create friends, not fans. Our primary goal is for our fans to feel like we are talking with them, not at them. Bravo’s social strategy hinges on having a two-way conversation with our fans, where they know they’re being heard and they are rewarded for chiming in. As such, at the start of 2013, as we continued to strengthen our mission, Bravo launched a first: a full-fledged fan reward program on Twitter: @TheBravoholic. We have always appreciated the way our Bravo-obsessed fans spread the word about our content and now, with @TheBravoholic Twitter handle, they have a platform to use as their microphone. Utilizing social and on-air promotion, we have not only built an army of followers and fans determined to have their voices heard, but have also made strong one-on-one connections with our Bravoholics who, in turn, become our #1 influencers, which rewards both parties. With over 50 Bravoholics and nearly 17K followers to-date, we’ve built a community for our most-passionate fans and continue to reward stand-outs for being Bravo loyalists. By growing each Bravoholics’ personal follower count, we’re expanding our reach to potential new fans who are exposed to our brand through our ambassadors’ personal accounts, while simultaneously fueling a highly engaged, centralized community through @TheBravoholic. What started as a reward program evolved into a two-way partnership: a friendship. 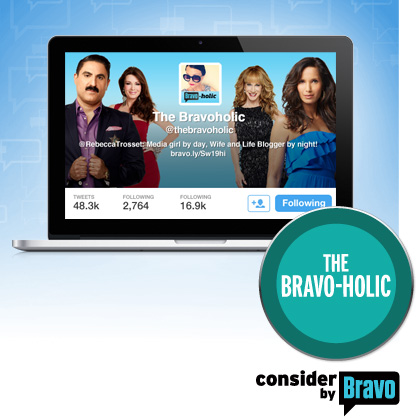