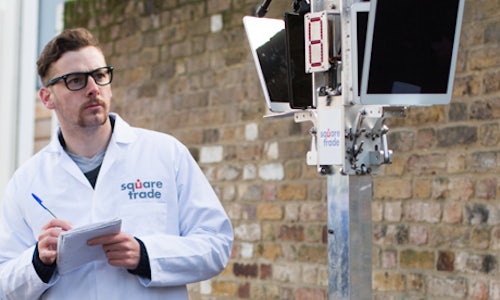 In April 2013, SquareTrade introduced its Breakability Index for devices - a new Richter Scale for device danger designed to help consumers make the best choice when it comes to their new devices. As consumers rely more heavily on mobile devices - taking them everywhere and using them for everything, we thought it made sense to test a device's "Breakability," - a gap left by traditional product reviews. How likely is it to suffer damage from the drops, spills and falls of everyday human clumsiness? We created a robot to simulate common danger situations and a scoring system that tests devices across 8 categories: front panel, back panel, size, weight, grip-ability, water resistance, friction, co-efficient and drop test. We then tested the new Samsung Galaxy S4 against the Samsung Galaxy S3, and the iPhone 5. We found that the new S4 was the most breakable of all the phones we tested, which made headlines in the national media and drove more than 500,000 views to our YouTube page to view the video. The press release and scorecard are here: http://www.squaretrade.com/press/squaretrades-breakability-score-debuts-as-new-richter-scale-for-device-danger-new-samsung-s4-rated-a-dangerous-7 We expanded the Breakability Index to tablets and in August, tested the new Nexus 7.2 tablet: Nexus 7.2 Drop Test vs. iPad Mini vs. Old Nexus, which again drove thousands of views on YouTube: http://www.squaretrade.com/press/new-research-rates-googles-new-nexus-7-tablet-a-medium%20risk-5-breakability-score-outscoring-the-ipad-mini And again for the new iPhone 5S and 5C when they launched: http://www.squaretrade.com/press/googles-moto-x-trumps-apples-new-iphones-in-latest-breakability-score-from-squaretrade This last Breakability Index was particularly newsworthy because we found that the underdog - the Moto X - was the least breakable of all devices! This generated stories in countless outlets including Time Magazine, All Things D and the Associate Press: http://bigstory.ap.org/article/tests-new-iphones-less-durable-iphone-5 as well as broadcast coverage in more than 40 states and more than a half a million YouTube views. SquareTrade sells protection plans. We're in the business of educating people about the importance of protection and are constantly thinking of new ways to do so. The Breakability Index institutionalized the concept of breakability and successfully positioned it as a serious consideration for consumers. We now hear people talking about a device's "breakability" all the time. What started out as a small publicity stunt turned into widespread awareness of the fragility of our devices. Through the drop test videos on YouTube, consumers are able to see first-hand how mobile devices fare before they purchase a new phone or tablet. The tests are simple, unbiased and a great visual for consumers that might have not considered breakability before committing to a new device. In 2013, millions of people consulted these Drop Tests at youtube.com/electronic breaks to compare the durability of the newest products. These videos illustrate the importance of having a protection plan for valued electronics by showing accidental damage as it happens in real time. The Drop Test has helped millions of people understand just how prevalent accidental damage is – and it also established SquareTrade as a thought leader and an innovator. We have also found that through the breakability tests, media can easily utilize the YouTube drop test videos for their coverage of new mobile devices. SquareTrade covers all devices and brands, so media can count on the tests as fair and impartial studies. Dozens of top tier media outlets, including the Associated Press, CNET, All Things D, CNBC, NBC, CBS, ABC and FOX, included the videos in their mobile device coverage last year. Below are examples of SquareTrade’s breakability tests and press coverage of the videos. Drop Tests iPhone 5c vs. iPhone 5s vs. Moto X vs. Samsung S4 SquareTrade Drop Test: https://www.youtube.com/watch?v=dLuwkrbhmYU Nexus 7.2 Drop Test vs. iPad Mini vs. Old Nexus: https://www.youtube.com/watch?v=UeEdG8R5qzE Samsung Galaxy S4 Drop Test vs. iPhone 5 & S3: https://www.youtube.com/watch?v=kjE__rr7J1s Press Coverage All Things D: http://allthingsd.com/20130922/when-it-comes-to-heartiness-squaretrade-says-moto-x-tops-both-new-iphone-models/ ZDNet: http://www.zdnet.com/samsung-galaxy-s4-more-susceptible-to-lifestyle-damage-than-iphone-5-claims-squaretrade-7000014663/ ABC San Francisco: https://www.youtube.com/watch?v=2YWQh0ss4M0 NBC 2: https://www.youtube.com/watch?v=I75tZAAbSj4 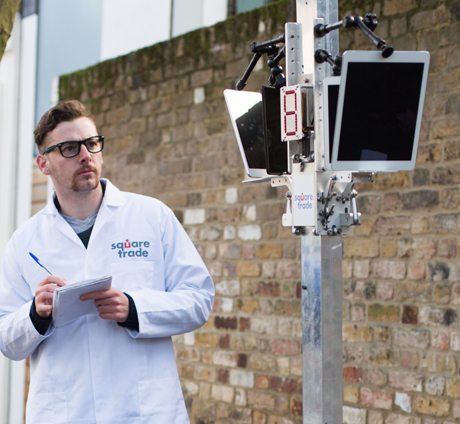