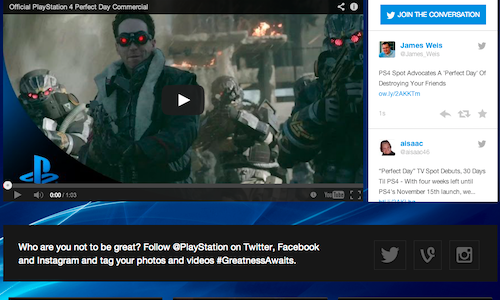 During E3 2013, Playstation announced that their long-awaited PS4 gaming console would be released that fall and they wanted to leverage the real-time social buzz from their die-hard fans to reach new gamers. With so much going on during the biggest gaming event of the year, a simple banner ad campaign wouldn’t break through the noise. To achieve this, Livefyre and Carat created an E3 Social Hub featuring real-time social content from Twitter, Vine and Instagram posted by gamers at the conference. The Social Hub was then natively integrated into the pages of IGN and Joystiq, two of the largest gaming news websites, in order to amplify Playstation’s reach. This was so effective, that PlayStation partnered with Livefyre and Carat to create a Social Hub at www.GreatnessAwaits.com, making it the destination for a multi-million dollar media campaign that fall. By driving traffic to a Social Hub instead of a regular microsite, PlayStation was able to leverage the social buzz that was already taking place about their consoles to increase engagement, sharing and advocacy building up to the November release of PS4. To date, GreatnessAwaits.com has earned 4.5 Million+ pageviews and curated over 3.3 Million pieces of social content, playing a central role in PS4 dominating XBox One in both sentiment and market share this holiday season. Playstation was planning their biggest console release in over seven years, but so were their competitors. With the next round of console wars impending and an eager group of gaming fans continually fueling the debate over which console is the best, Playstation’s best plan of attack for solidifying the PS4 as the victor was to stand for the gamer. But to do this, they needed to turn their fans into their advocates. To accomplish this, Livefyre and Carat created a unique two-phased approach that leveraged social curation with original content PlayStation’s brand advocates had created to integrate PlayStation’s authentic, earned media into the content strategy for PlayStation’s owned and paid media campaigns. Phase 1 kicked off at E3 Gaming Conference where PlayStation announced to influential press and their most loyal fans that the PS4 would be released this fall. To capture their reactions and excitement, Livefyre created a Social Hub that curated real-time posts about PlayStation and the PS4 from fans onsite at E3, with a live blog of exclusive PlayStation content about the PS4 announcement. Livefyre then integrated this Hub as a native advertising experience into IGN and Joystiq, amplifying the reach of their authentic fan reactions to new audiences. This initial Hub curated over 500,000 pieces of original social content about the announcement, earning 5 million impressions and average time-on-site of nearly 4 minutes. As the big release date neared, Playstation needed to capitalize on the excitement they had built during the E3 announcement and keep this group of fans-turned-advocates engaged. To do this, they launched phase two of the campaign with the new Greatness Awaits socialhub experience on web and mobile. During Monday Night Football, Playstation released the much-anticipated PS4 teaser commercial, which was also available to view on GreatnessAwaits.com. When visiting the Greatness Awaits Social Hub, fans could also view real-time social content from fellow gamers discussing the big release and a trending games widget that showed which PS4 games fans were most excited about. The night before the release, fans could view a live press conference about the PS4 and chat with other fans by using hashtags like #PS4 and #GreatnessAwaits. The GreatnessAwaits.com website also evolved as the campaign did. Prior to the launch of the console, the site featured social content about the excitement around the launch. On launch day it featured all the Playstation loyalists who were waiting in line outside of Best Buys in the freezing cold to get their hands on the device. The website also live streamed the Spike TV launch event and several press releases Playstation made at key events like CES, E3 etc. The site will continue to change as new games and features are released to give people a reason to come for the first time or for the 100th time. THE RESULTS By providing a space for the entire gaming community to share excitement surrounding the impending PS4 release, Playstation was able to turn fans into advocates and far surpass their global sales targets for the launch. They also saw the majority of conversations surrounding the PS4 with a positive voice (56%) versus Xbox which saw only 37%*. So far, the Greatness Awaits Social Hub has seen: 4.5 Million+ pageviews 3.3 Million pieces of social content curated 75,000 fans featured on the hub 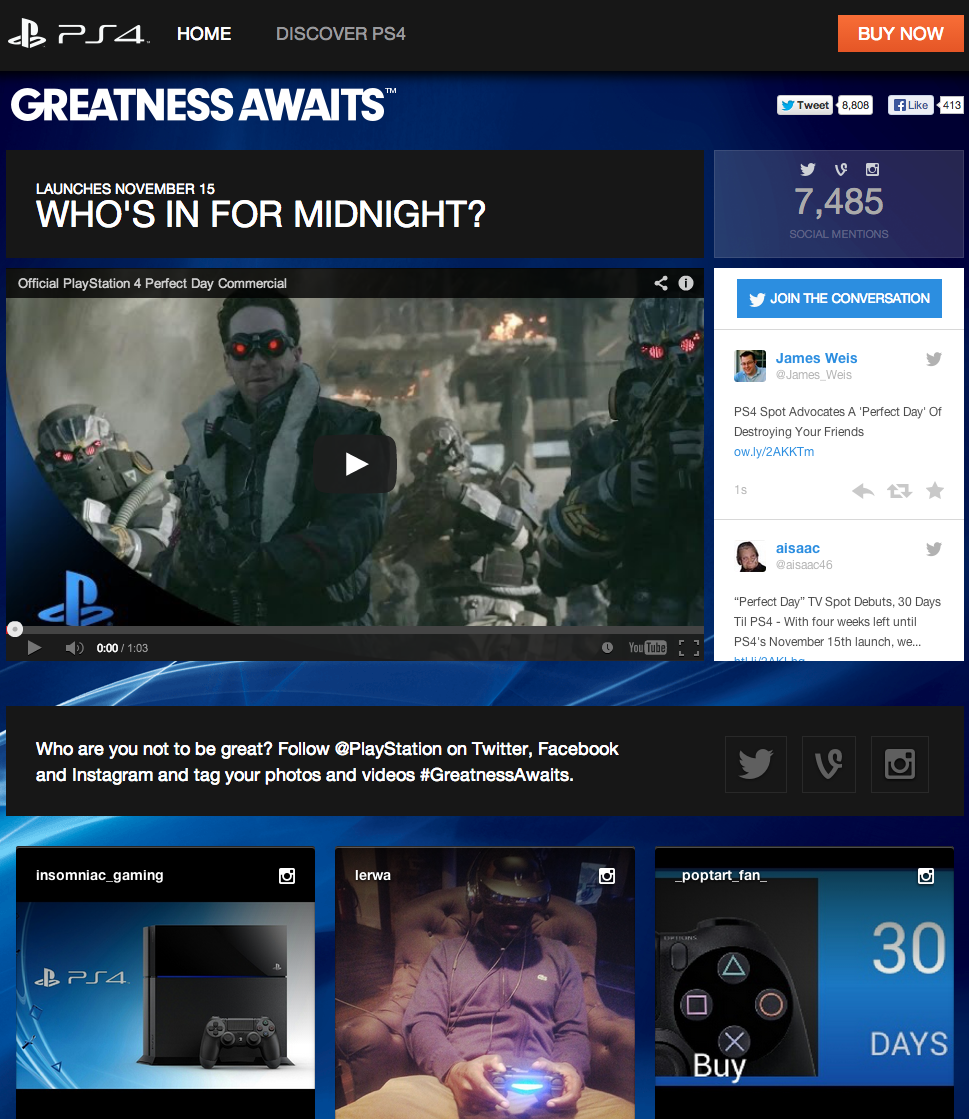