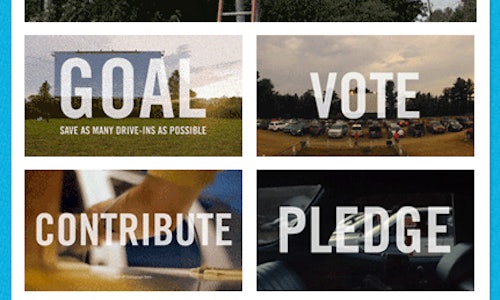 At the end of 2013, drive-in theaters faced a big problem. The movie industry’s switch from film to digital distribution threatened to put U.S. drive-ins out of business with a costly upgrade to digital projectors. Seeing as drive-ins are an iconic part of American car culture, we couldn’t let the magic of the drive-in flicker out—not that easily. So we had a thought: Who better to save drive-ins than a car company, and what better car company than Honda? It all started with a website that inspired drive-in owners to rally America’s votes, determining where Honda would donate five digital projectors. We even hosted pop-up drive-ins across the country and a Twitter Vine auction hosted by film critic Leonard Maltin to raise awareness and get more contributions. But our plan was always to spread the word even more, so we fostered a passionate community on Tumblr. When fans expressed their love for the nostalgic drive-in, we relived the memories with them by reblogging our favorites. And when they longed for more nostalgia, we charmed them with content that made them fall in love with this slice of Americana more and more. Tumblr was where the soul of Project Drive-In lived and created the spark that ignited a national movement. Watch how we ignited the Project Drive-In movement: Honda’s social media strategy has always put genuine fan engagement first, and Project Drive-In is no exception. We recognized the slow decline of a beloved American family pastime and tackled the issue head-on with an interactive Project Drive-In Tumblr. But unlike past social media initiatives from Honda, we expanded the reach of the movement by talking directly with an audience who cared as much as we did. One thing was certain: We weren’t the least bit shy about taking full advantage of Tumblr’s visual canvas and using it to open up a conversation with new admirers of the brand. After identifying drive-in fans’ interests through Tumblr’s tagging system, we gave them a daily dose of content that fed their passions—specifically their love for films, cars, vintage memorabilia, landscapes and, of course, animated GIFs. The Project Drive-In story evolved each day as our content captured the countless reasons to fall in love with the drive-in, from watching movies under the stars to the infamous intermission dance and the smell of old-school concessions. But the content didn’t just come from us. We reblogged existing drive-in moviegoers’ posts and put our own spin on them in the spirit of the cause. And with the hundreds of stories and photographs we collected from the drive-ins themselves, we were able to show each one’s unique charms to encourage voting and contributions to the Save the Drive-In fund. Ultimately, the interactive story we told on projectdrivein.tumblr.com helped us save more drive-ins than originally anticipated. Without the passionate drive-in supporters on Tumblr, we wouldn’t have been able to start the conversation that raised funds for four additional digital projectors and continued support for the movement through the end of the year. 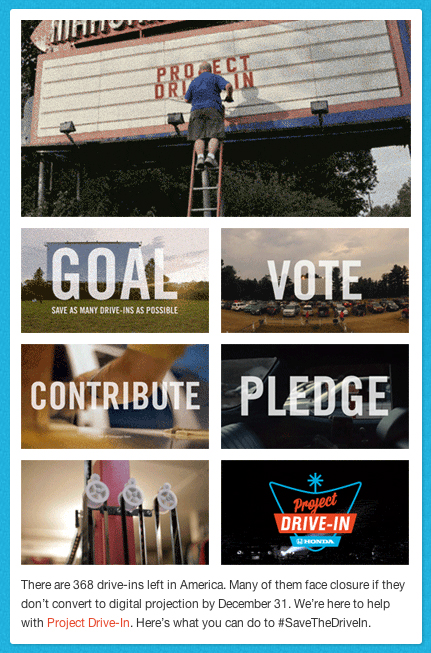