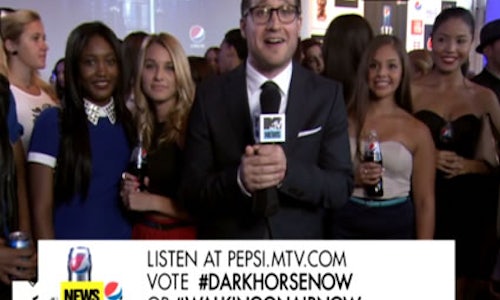 Socially fueled campaigns were not new news for advertisers in 2013, but Pepsi was the first brand to ever enable consumers to determine an artists’ next early release from a new album by use of Twitter hashtags. Pepsi was able to use its long history with music to justify its role in the promotion and consumers appreciated and understood that only Pepsi could bring them this level of insider access and influence. Fans around the world spread the word of this opportunity, creating massive buzz and leading the campaign’s cobranded hashtags to become global trending topics on Twitter on 3 different dates. Pepsi set out to make Millennials an active part of its summer music program by using its rich history in influencing pop culture to create a social media campaign that enabled consumers to unveil top-secret song titles, lyrics and samples from Katy Perry’s new and then unreleased album, Prism. To bring the program to life, Pepsi crafted unique social challenges that were hosted on Twitter, the social platform that was the most active for Katy Perry and her fans. Key insights about Katy’s fanbase were considered in determining the challenges– what they talk about, what they create, what drives them to be a part of the “fan army." Knowing that the “KatyCats" are a rabid fanbase that was yearning for insider access, Pepsi teamed up with MTV to provide Katy’s fans with behind-the-scenes peeks at her new album that had never been shared with the public. Through social media posts, on-air promo spots and integrations on MTV News, fans were alerted that this exclusive content would only be unlocked once they hit a certain tweet threshold, incentivizing them to use Pepsi’s co-branded hashtags hundreds of thousands of times. On the weekend of the MTV Video Music Awards, Pepsi opened voting and encouraged fans to tweet with one of two dueling hashtags (#DarkHorseNow or #WalkingOnAirNow) to decide which song would be Katy’s next early release from her new album. Moments before Katy took the stage at the VMAs, an MTV News correspondent announced the winning track, Dark Horse, live on air and credited Pepsi for making the experience possible. To deepen engagement even further, consumers who had tweeted and signed up for Pepsi’s consumer loyalty program were awarded a free download of the track on iTunes. A program like this one, which empowered fans to decide Katy Perry’s next early release, amplified Pepsi’s history in influencing pop culture by taking its involvement with music to the next level and asking consumers to do something they had never been able to do before. To accelerate the brand in the marketplace, Pepsi used social media to rally Katy Perry’s fans around the brand and encourage them to make use of the co-branded hashtags to unlock exclusive content. By providing consumers access behind the scenes of Katy’s new album, the brand unlocked a world of social energy as fans declared their thanks to Pepsi for bringing them closer to the content they craved. 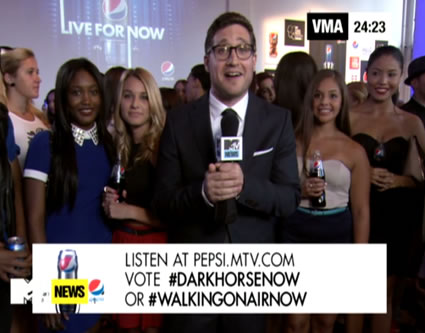