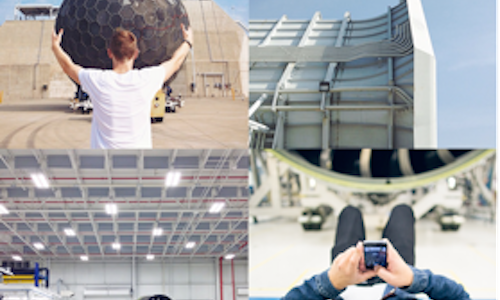 GE is a 120-year old multi-national company that designs and builds airplane engines, power turbines, locomotives, and molecular imaging equipment. Every single day, those products are used by people all over the world. GE uses social media to share its story and engage their global audience. Instagram has become the hub of our visual storytelling and is a way to connect with our followers in a new way. Generating content for Instagram has become a key priority for GE in the past year. In 2013, the brand has planned photo shoots on location at several of the most innovative facilities in the world specifically to produce high quality content. These shoots give their loyal followers never-before-seen access that few people have. These photo shoots took place in locations like the GE Aviation Engine Testing Center in Winnipeg, Canada, CSX Intermodal’s Northwest Ohio Facility in North Baltimore, Ohio, and GE Transportation’s Manufacturing Facility in Fort Worth, Texas. They also took their fans to get a first hand look at two of the most important Airshow’s in the world, in Dubai and Paris, where GE gets to unveil and show off some of their most cutting edge aviation technology. GE takes their fans all over the world and immerses their followers in the beauty of innovation. GE has been a first-mover on Instagram since the day they uploaded their first photo on May 19, 2011. The brand is constantly finding new ways to do things differently and connect with their community in new ways. GE runs groundbreaking activations to reward their fans, including contests to find fresh talent as well as inviting fans to facilities to see them first hand. They’re also part of the small group of Instagram’s brand partners allowing them to be one of the first to share videos and to run a paid promotion behind a photo. On November 22, 2011 GE launched a contest to find their next ‘Instagrapher.’ The winner of the contest would become the next official GE Instagram photographer and would be flown to the UK to photograph the GE Aviation facility in Wales. The search allowed GE to engage and reward their followers, while also finding a great new photographer. Over 4,000 photos were submitted using the hashtag #GEInspiredMe. The winner, Adam Senatori, has gone on to work on multiple GE shoots and his following has increased by 680,000 since winning the contest. Most recently, GE created and managed the first InstaWalk ever hosted by a brand on September 20, 2013. Six influential Instagram photographers and six GE super fans were invited to an aviation facility in Peebles, OH. To find the super fans, the brand ran a contest on Instagram generating over 200 entries who had to explain why they are the biggest #AVGeek ever, a term many of our loyal fans associate themselves with. The influencers included notable Jessica Zollman, Michael O’Neal, Chris Ozer, Cole Rise, Dan Cole and Adam Senatori, all of whom have a reach totaling over 3.3 million. The group of super fans and influencers were given unprecedented access to the facility and the result was a real-time tour of one of the world's most advanced jet engine test centers, as seen through the eyes of Instagram's best photographers and most avid fans of GE Aviation. Highlights of the campaign included over 200,000 social engagements across #GEInstaWalk posts, several photos featured on Instagram’s most popular page, 3.8 million unique viewers and over 3,000 new followers to the GE account - all accomplished with no paid media support. The first GE InstaWalk was just the beginning. The campaign was so successful, we’re planning two more for 2014 as well as more photo shoots to capture new GE content in amazing places. GE will keep bringing their fans behind the scenes to the most innovative facilities all over the world, continuing to do the unexpected and adding value on a channel that really fosters those behaviors.

- Digiday: GE and Instagram Want Aviation Fans to Take a Walk With Them http://digiday.com/brands/ge-instagram-aviation/ - PSFK: How Instagram is Transforming Aviation Into a Design Friendly Industry http://www.psfk.com/2013/09/instagram-ge-aviation-tour.html - Instagram for Business: General Electric Shows a Different Side on Instagram http://instagram-business.tumblr.com/post/76538967687/general-electric-shows-a-different-side-on - Business Insider: These 20 Brands Have Mastered The Use of Instagram http://www.businessinsider.com/these-20-brands-have-mastered-the-use-of-instagram-2013-1?op=1 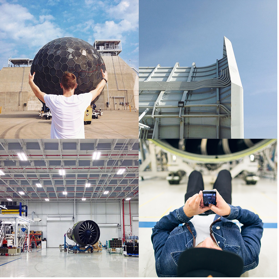