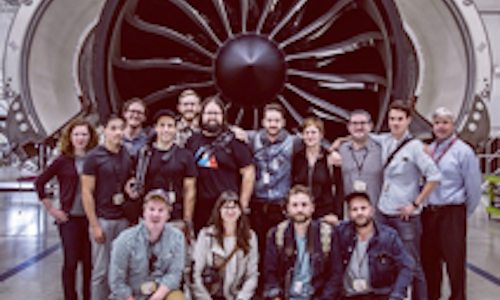 Starting in 2011, Instagram has been a go-to channel for showcasing some of GE’s most impactful technology, from the science behind a simple water-repellent material to the giant machines that power planes, locomotives, and turbines. GE’s Instragram feed allows the company to show its best self to a community of enthusiasts who are genuinely interested in how a technological giant goes to work every day. Over the past few years we’ve run a number of programs on Instagram that have leveraged influencers to earn attention for the brand with the goal of providing GE fans and enthusiasts a captivating, behind the scenes look at GE technology. Last year, we created and managed the first ever InstaWalk hosted by a brand. Six influential Instagram photographers and six GE super fans were invited to an aviation facility in Peebles, OH. They were given unprecedented access to the facility and the result was a real-time tour of one of the world's most advanced jet engine test centers, as seen through the eyes of Instagram's best photographers and most avid fans of GE Aviation. The key to GE’s B2B success from InstaWalk: 1) Access to machines and technology that have since been unavailable to broader audiences, rendered beautifully through both professional and budding Instragram photographers 2) Selecting the right Instagram users for the walkthrough: people with both an existing following and an infectious enthusiasm for technology. 3) Impressive, even awe-inspiring technologies delivered by everyday people. Getting this mix right is central to the GE brand and was brought to life in our first Instawalk. Objective: To help bring to life GE and our rich 120-year history as a company, we dug into our archives and discovered photos from the dawn of our modern, technological world. From the first jet engines made in the United States, to experiments into the Sun Motor introduced at the 1939 World’s Fair, to the modern machinery that drives industry and infrastructure for the world, the GE Instagram feed provides a rare glimpse how big technology comes to life. In order to build upon the success of our Instagram content and continue to grow our audience, we decided to hold the first ever InstaWalk hosted by a brand. We traveled to Peebles, OH where GE engines undergo final assembly and a series of test that simulate real-world hail and ice storms, typhoon conditions, and winds up to 100 mph. The group of influencers and super fans were invited to explore the different facilities and take a fun and fresh look at the engines. Utilizing their iPhones, they were encouraged to get creative when documenting these beautiful pieces of machinery. GE encouraged the photographers to take advantage of being in these awe-inspiring spaces by capturing photos from unique perspectives and angles. They also utilized the group by juxtaposing people with the machines in a unique manner. The photographers were able to ask the engineers questions to really understand the details behind how an engine is built and test Overall Impact: GE is a company made up of 300,000 researchers, engineers, technicians, and skilled workers who design and build some of the most interesting and useful technology in the world. And while GE is a household name in many countries, not everyone is aware of how vital the company is to the world’s infrastructure. Our goal of the InstaWalk was to create something as serious and engaging as a documentary, but also fun and engaging for an Internet and B2B audience. Every year, we produce approximately 1,400 engines. In order to highlight and showcase the new GEnx, one of the world’s most efficient commercial engines, and the GE90, the world’s most powerful commercial jet engines our photographers saw a behind the scenes view of the manufacturing and testing of these powerful and brilliant machines. Highlights of the campaign included over 200,000 social engagements across #GEInstaWalk posts, several photos featured on Instagram’s most popular page, 3.5 million unique viewers and over 3,000 new followers to the GE account. The success from the InstaWalk was supported by virtually no paid media support. 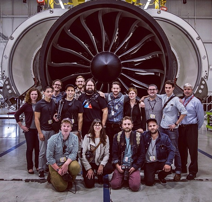