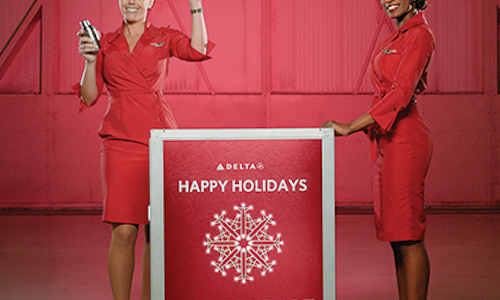 For the holidays, Delta Air Lines wanted to distribute a heart-felt message of cheer to a global audience. Not sell anything. Not include some sort of clever product placement. Just say “Happy Holidays." So, we took the very symbol of airplane hospitality, a beverage cart, turned it into a Cheer Cart, and rolled from there. We introduced Cheer Cart in a festive online video, released on YouTube and Facebook, and supported it through paid social media. In the video, musicians and Delta pilots and flight attendants used service items like martini shakers and wine glasses to play an original holiday composition that became our campaign anthem. By using the universal language of music, this video was appreciated by a global audience. Then, we rolled our Cheer Carts out on a 3-week, 5-city holiday tour, making 26 stops to bring cheer to people in unexpected places. We branded the cart with the #CheerCart hashtag and used it consistently across every element of the campaign. We employed a mix of live Tweeting and Instagramming from each event, then quickly produced a short video to share and promote on Facebook and YouTube within 24-48 hours. With a modest budget to cover all production, paid media and associated costs, we set out to create Delta’s first truly integrated social campaign. Historically, Delta’s holiday greeting has been targeted to SkyMiles members and distributed via email. In 2013, Delta wanted to broaden their reach of sharing thanks and goodwill by “spreading cheer for all to hear," so we knew an idea based in social media was the way to go. We employed a social marketing strategy encompassing Delta’s 4 social platforms and incorporated approaches for both paid support and organic sharing. Delta’s primary goal for this campaign was to generate goodwill and we succeeded greatly. The campaign pulled a Positive Sentiment rating of 98% and generated thousands of smiles along the way, in person and in social. Secondary goals were also met and exceeded. We generated awareness and buzz in social media, measuring 3x the social chatter around the Delta brand from the same period last year. Our #CheerCart hashtag was adopted quickly, appearing in 84% of posts around the campaign. Engagement with the brand also spiked—we earned 109K new Facebook Likes and 32K more Twitter followers while the Cheer Cart campaign ran. Here’s a video case study, recapping the entire campaign: 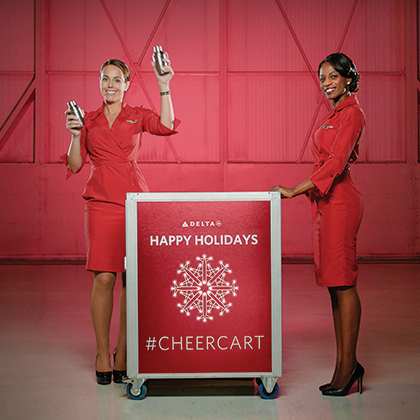