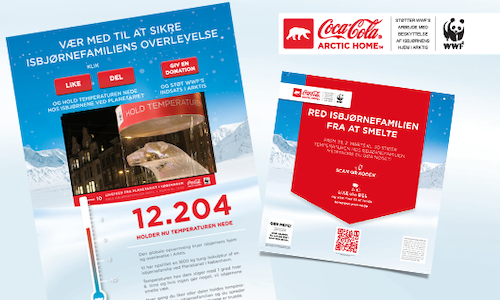 In the first quarter of 2013 Coca-Cola launched the campaign ‘Arctic Home’ in 16 European countries. The purpose was to raise awareness of the endangered living conditions of the polar bears in the Arctic and contribute to the World Wildlife Foundations work in the area. To make the issue top of mind in Denmark, we adopted drastic measures. We placed a two ton ice sculpture depicting a polar bear family in front of the Planetarium in Copenhagen, and through a Facebook application we let the Danes decide if the polar bears should stay cool or melt away. In choosing Facebook, we were able to not only raise awareness and engagement, but also take a simple idea and turn an otherwise very CSR-driven message into an interactive, fun and engaging activity. The Danes were up to the challenge! During the 60 hours that the experiment lasted, more than 35.000 people interacted with the Facebook campaign tab, and the story spread quickly on social media. The Facebook activity was also supported through a social ad campaign as well as through other online and offline channels. It was integrated with a PR campaign, which involved proactive press activities towards online media and bloggers, stakeholder partnerships, and an exclusive press event for journalists and key stakeholders, where the IMAX film “To the Arctic" was screened. The campaign was further supported through paid media with display ads. The polar bears were followed in several large Danish media and were transmitted to millions of viewers all over the world through the international news channel TRT. Idea generation and execution was conducted by Essencius and Unfold by Essencius. IUM was media agency and Wunderman was the digital agency. We believe that this campaign deserves to win because we utilized Facebook and made a campaign that was creative and interactive. We were able to engage the audience and give them a chance to influence, and make a difference to, something that was happening in the real world. The overall campaign message evoked different emotions in the target group (Danes ages 15 to 30). The activation leveraged real-world consequences, showing that if nothing is done to help improve the Arctic, then the polar bears will slowly disappear. We were able to achieve great results: - 35, 266 people interacted with the Arctic Home Facebook tab over the 60-hour campaign period - 10, 337 people liked and shared the message - extensive coverage in other online and offline media - it was broadcast by international news to millions throughout Europe - it was shared and talked about by Coca-Cola fans - increase of donations made to the WWF in Denmark In the end we were able to use Facebook to raise awareness and mobilize the target group to take action. The result of the social experiment was that the polar bear family was kept cool and was saved.

The campaign won a prestigious Mashie Award for Best PSA, was given the Summit International Award for Best of Category for Social Media Marketing, the Platinum Award for Integrated/Mixed Media/Ad Campaign and was also nominated for a Danish Internet Award in the category Social Media Activity. 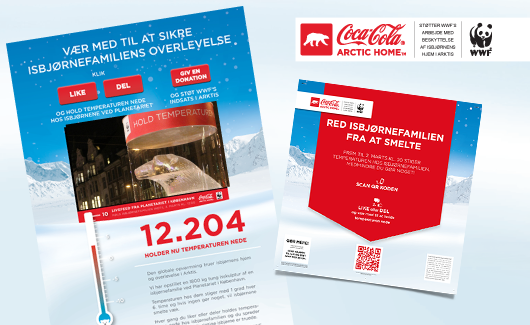