This past holiday season, fans of Beats By Dr. Dre all over the world became part of the leading audio brand’s interactive in-store holiday experience, courtesy of a&g Labs. Beats by Dr. Dre asked us to help promote their Beats Pill 2.0 during the 2013 holiday season. We developed an ambitious idea to build an in-store holiday installation that featured the brand’s wildly popular wireless speakers. On December 14th at 10 a.m., a 6-foot interactive Beats holiday tree was on display as the centerpiece of the Beats by Dr. Dre flagship store in Soho, NY. The installation, built by a&g Labs, was comprised of 238 Beats Pills, 952 LEDs and 21 hand-painted layers. But this was more than just another in-store holiday installation. We saw an opportunity to bring the tree to life, with the help of Beats’ devoted loyalists. We created a powerful consumer engagement that truly spanned the realms of physical and digital interaction. The one-of-a-kind tree was powered by social media with the help of Beats’ fans and followers! Fans who tagged their Instagram photos with #BeatsHoliday saw their images instantly appear on digital screens decorating the tree. Additionally, each time the hashtag #BeatsHoliday was mentioned on Twitter, red LED lights within the white Beats Pills twinkled bringing holiday cheer to in-store shoppers.Our idea wasn’t just to roll out another run-of-the-mill social media campaign, but rather to create a living, breathing extension of Beats by Dr. Dre’s digital community. We seized the opportunity to creatively hack the client’s product to construct a unique physical holiday tree powered by social media and the consumers that use it everyday. It started by breaking open 238 Beats Pills and hand wiring each of them with customized electronic components. The cores of the Pills were comprised of 952 LEDs, 2,000 feet of wire, and over 10,000 hand-soldered joints. After modifying the Beats Pills, we wrote two applications that scanned Twitter and Instagram APIs for the hashtag #BeatsHoliday. A web application, hosted on Heroku, pulled Instagram photos and streamed them on the tree in real-time, while an Arduino Mega hidden inside of the tree powered the blinking LEDs inside of the Beats Pills. And we did all of this in just three weeks time. The holiday tree installation demonstrated an innovative application of social media by integrating social chatter with the client’s physical product. The installation was totally powered by user-generated content and rallied the Beats Army (the name of Beats by Dr. Dre’s fans) to participate in bringing holiday cheer to the Soho store. All of these components combined to create a powerfully unique installation driven by Beats by Dr. Dre’s brand loyalists. The project not only used social media to promote the Beats Pill, but it was entirely driven by Beats by Dr. Dre‘s digital community. The Beats Army was inspired to share the hashtag #BeatsHoliday and participate in bringing the tree to life. To date, the tree has received nearly 1.8MM views in store and across social communities. Beats by Dr. Dre was able to reach fans all over the world and give them a chance to be part of the brand. Our campaign went beyond the basic capabilities of Twitter and Instagram. Hashtagged Instagram photos were live-streamed on the tree allowing fans to view their photos in real-time. The tree twinkled with every mention of #BeatsHoliday on Twitter, a unique visualization of the brand’s social media conversations. This is unlike anything that had been done before. The installation gained national recognition after being featured in 10 renowned publications across the country, including PSFK, The Boston Globe and the Philadelphia Business Journal, to name a few. In total, these publications helped Beats by Dr. Dre reach an additional 5.5MM+ readers. We created an outlet for Beats fans all over the world to truly be part of the brand. Not to mention, spread a little holiday cheer along the way. 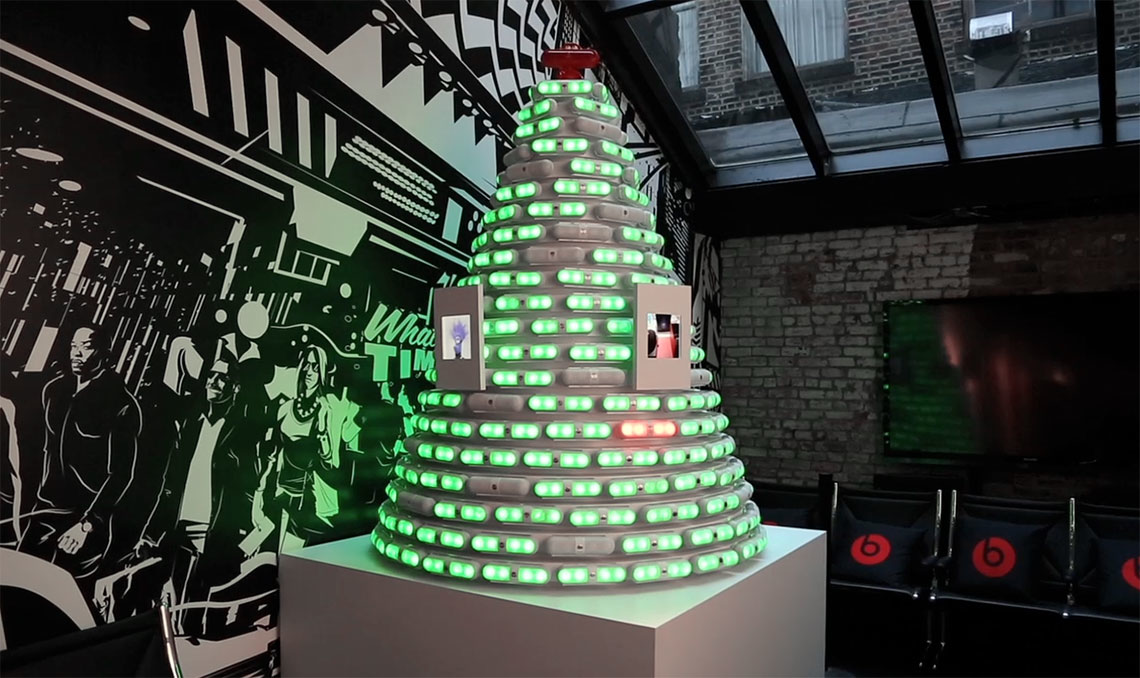