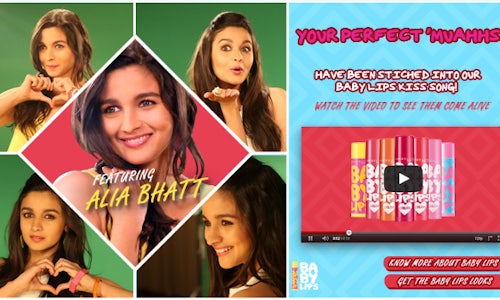 Staying true to the young, cosmopolitan and contemporary brand that Maybelline New York India is; it only seemed fitting to develop a catchy and innovative mode of engaging its fans across all digital platforms in India. Harnessing the potential of ‘crowd-sourcing’ in India millions of Maybelline New York India Facebook fans were invited to contribute to India’s first ever crowd-sourced ‘Kiss’ song for one of their favorite products – the Baby Lips lip balm. The world renowned cosmetics brand made innovative use of a Facebook application to source the kisses of the crowd which saw close to 6000+ girls sending in their kisses for the song which featured the brand ambassador Alia Bhatt. Young, peppy and fun-loving Females between the ages of 13 – 35 years formed the main audience of this campaign. The Maybelline Girls love make-up, are fanatic about fashion, enjoy knowing about and experimenting with the trendiest fashion statements and always converse on social media about beauty and lifestyle. The Baby Lips Kiss Song, effectively communicated the product’s core thought – a Lip Balm (available in funky flavours) that protects and moisturizes one’s lips and most importantly repairs the lips after close to a week’s use. Also, the brand’s bubbly, peppy and edgy spirit was represented through the lyrics of the song - “Kiss, Pucker and Pout, I love my Baby Lips, Sexy they Shout!" The video to this catchy song showcases women with five different fun personalities that represent the brand’s philosophy along with Alia Bhatt - a popular Bollywood actress who brings her fun spirit to the video. Alia as the ambassador of Maybelline represents the young, contemporary cosmopolitan girl who is attuned to fashion at all times and loves to wear make-up.An integrated campaign that was executed across Cinema, Mobile, Radio, TV and Social Media – the Baby Lips Kiss song has received close to 4 Million views on YouTube since its launch and a total of 391, 647 ringtone downloads. The average twitter mentions of Baby Lips per day was 536 and in total the twitter mentions were 17, 667. The Baby Lips Kiss Song was featured on popular music channels and radio stations along with being among the top trended branded videos on YouTube for over 48 hours. Across the Baby Lips campaign various conversations on Twitter trended in India and Worldwide such as #IWouldKiss #KissSongQuiz #KissCanFix among many others. The Maybelline New York India Facebook page grew by 396,680 fans and the Twitter fan base increased by 1392 followers across 2 phases of the campaign. With the launch of the Kiss Song, the sales of the baby lips lip balm during summer matched the sales of the product during December which is the month that sees the highest use of Lip Balm due to the winter season. The Baby Lips song is a perfect example of how brands are adopting crowdsourcing to connect with their fans. This collaboration between the fans and the brand gave every Maybelline Girl an overwhelming sense of belongingness. Results: 6000+ girls contributed to the crowed sourced Kiss Song with their Kiss sounds The Kiss Song video garnered over 4,000,000+ Million views in 4 months 400,000 girls downloaded the Kiss Song on their mobile 400+ blogger outreach on the campaign including covering and attending the launch event & product reviews 6 branded hashtags on Twitter which trend worldwide/India 40% users engage in Facebook content 1800+ UGC entries received with pucker & pout activity MNY rules the 'Kiss' space for over 7 months with the Baby Lips Kiss Song campaign Total Digital earned media value: 36 Million No.1 searched for makeup brand on Google The buzz made Baby Lips the No.1 lip balm on e-commerce & No.4 lip balm in India

India's 1st crowd sourced Kiss Song - http://bit.ly/1bUtToX *Disclaimer - due to an internal security breach, the original video was deleted from the brand's YouTube channel. The above video was re-uploaded on the channel for the public once the issue was resolved. https://www.facebook.com/sensationalmaybelline https://twitter.com/MaybellineIndia http://instagram.com/maybellineindia# 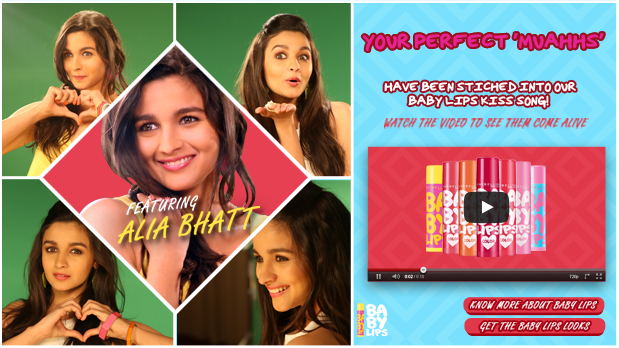