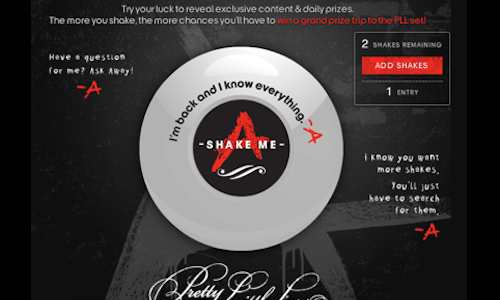 AT&T partnered with ABC Family for a 360-degree sponsorship surrounding the Pretty Little Liars winter premiere. The sponsorship was amplified on Facebook with a unique interactive application, A’s Pretty Little Answer Ball. A is a mysterious figure on the show who sends eerie messages to the series' main characters. A's Pretty Little Answer Ball application was developed to play off this dynamic and allow viewers to feel as though they were part of the storyline. Fans received messages from A and earned sweepstakes entries to win a trip to the set of Pretty Little Liars by “shaking" the digital answer ball that incorporated vintage Magic 8 Ball visuals and functionality. Each shake released exclusive content and earned one entry into the sweepstakes, with all content shown within AT&T’s Moto X phone. To drive fan engagement, ABC Family created a social scavenger hunt where fans searched for secret AT&T-branded code words that were distributed throughout ABC Family and Pretty Little Liars’ Facebook, Twitter, Instagram, Tumblr and Pinterest pages. Upon successfully finding the code words, fans earned more shakes and therefore more entries into the sweepstakes. Social tasks such as “liking" AT&T’s Facebook page also earned fans additional shakes. The application and sweepstakes were promoted across all platforms including on-air, abcfamily.com, Facebook, Twitter and Instagram. The application launched on December 24, 2013 and was designed for use across desktop, tablet and mobile devices. The unique functionality of A’s Pretty Little Answer Ball Facebook application coupled with the interactive social scavenger hunt proved to be a winning combination for AT&T and ABC Family. Fans engaged with all elements of the sponsorship to gain as many entries into the sweepstakes as possible and were exposed to AT&T branding every step of the way. Pretty Little Liars’ winter premiere became the #1 most-tweeted season premiere ever with over 1.3 million tweets and the application delivered strong results including: - 1,454,298 total app views - 313,156 thousand sweepstakes entries - 2:33 average time spent on app throughout campaign - 7,357 “likes" to AT&T’s Facebook page in only four days - Twitter posts garnered over 24 million impressions 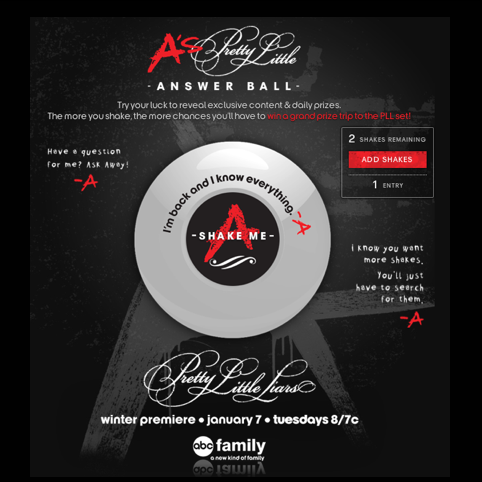