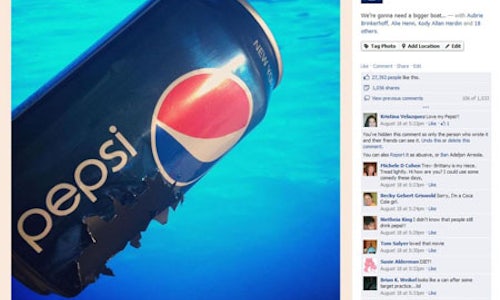 2012 was the year for Pepsi to Live For Now and we wanted to get the word out. We weren’t going to just say it; we were going to live it. @Pepsi took the Live For Now Mentality and ran with it, taking to Twitter to livestream epic summer concerts with Katy Perry and Nicki Minaj, give our followers weekly free MP3 downloads, share memes, and so much more—all in 140 characters or less.Pepsi has spent decades solidifying its place as a cultural leader, and its Twitter account is no different. Following @Pepsi gives our followers the skinny on all things pop—the latest music and movie news, sharing the latest memes and trends and way more. A few highlights from 2012: • #SummerBeats Concert Series: Pepsi worked closely with Twitter to livestream four huge summer concerts to our followers. The concerts, featuring acts like Katy Perry, Nicki Minaj, and Gloriana, were watchable directly from the Twitter stream allowing our million-plus followers to instantly tune in and join the convo in real time. • Pepsi Music Now: What good is taste if you don’t have the tunes?! Each Tuesday we gave away thousands of MP3 download codes for fans to snag their favorite tracks by using #PepsiMusicNOW. • Twitter Music Videos: Twitter’s all about what’s happening NOW. In 2012, we paired up with Twitter to create weekly videos recapping the week in music, entertainment and more—all based on the topics with the largest volume of convo on Twitter. • Flock To Unlock: To kick off Super Bowl weekend, we launched a giveaway to send fans to next year’s Super Bowl halftime show. Fans revealed clues by tweeting #PepsiHalftime, and helped them gain info needed to enter to win. Over the course of the weekend, #PepsiHalftime was used over 32,867 times on the day of the Super Bowl alone. • Engagement: While Twitter is a crucial part of Pepsi’s major activations, we also make sure we’re always showing our followers love. We’re always chatting it up with our followers, RTing their crazy tweets, responding to customer service issues and more. • News: Our finger is constantly on the pop-culture pulse, and we have the cred to prove it. We’re constantly sharing the latest news, gossip, memes and videos from around the web to our million followers. We use SocialFlow to curate dozens of news items, and make sure they’re sent out when our fans are talking about the same things for maximum impact. • Pepsi.com: The online destination for Pepsi is driven by our followers. We pull in hundreds of tweets and fan-photos every day to stream on Pepsi.com in real-time. For major events, like the Super Bowl and Grammys, Pepsi.com gets the take-over treatment, and is made up of thousands of tweets from fans talking about the events in real-time. 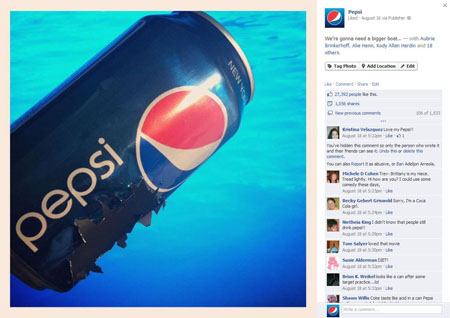