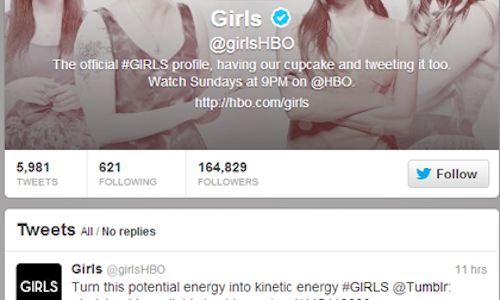 Launched at the 2012 SXSW Festival World Premiere of Girls Season 1, @girlsHBO on Twitter serves as the hub of social conversation for the series. Executive Producers Lena Dunham, Judd Apatow, and Jenni Konner are all particularly active on Twitter, and @girlsHBO serves as an official source for fan information and series updates. The Twitter profile is a powerful marketing tool that engages and interacts with fans and potential fans daily, 365 days a year. HBO manages the GIRLS Twitter profile in phases for each season: Long Lead, Pre-Premiere, In-Season, and Continuity. Leading into Season 1, the GIRLS Twitter encouraged awareness and information about the series and talent. @girlsHBO tied the SXSW series premiere and promotional campaign to Twitter by tweeting out “keys" daily as ways for SXSW attendees to get free breakfast, lunch, beers, and tacos. For Season 2, @girlsHBO encouraged catch up, detailing airings of the first season on HBO, HBO On Demand, and HBO GO, as well as tweeting along with fans catching up with 5-hour catch up stunt marathons (fans having a #GIRLSATHON). With the release of GIRLS Season 1 on DVD, @girlsHBO shared #GIRLSoverheard moments from fans, bringing the sentiments of the series to a wider audience. At all times, @girlsHBO is highly responsive and interactive with the fan base. Tweeting along with fans has proven to be a key part of the @girlsHBO presence, and fans share their own GIRLS content while enjoying a massive digital viewing party each Sunday, reacting along with HBO. When marathons air, fans participate in GIRLSATHON tweets, noticed by news outlets including The Huffington Post, and each marathon provides opportunities for fans to win GIRLS rewards and prizes. Day-long takeovers in line with HBO stunt programming has amplified awareness, and daily updates about the series has helped make GIRLS a significant component of the zeitgeist. 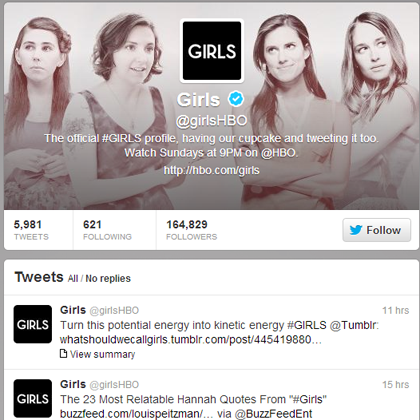