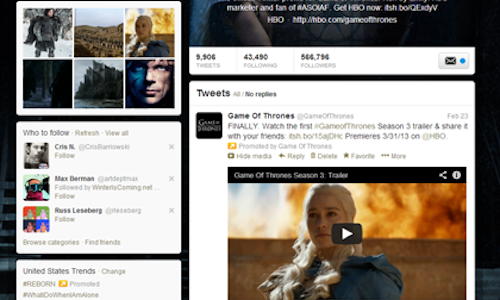 HBO identified that Twitter was hotbed of discussion for fans awaiting the TV adaptation of George R.R. Martin’s book series “A Song of Ice and Fire," and immediately focused on establishing a rapport with these aficionados. This was part of a multi-phased social media strategy designed to win over existing fans and gain new ones by breaking the stereotypes of typical fantasy fare and reinforcing HBO’s unique take on the genre. @Gameofthrones is a powerful marketing tactic that engages fans 365 days a year. The profile is meant to be extremely personal while appealing to a broad base of users. Followers relate to profile more as a friend than a promotional machineBeginning 3 months in advance of the Season 2 premiere, HBO launched a social media campaign in 3 phases: Long Lead, Pre-Premiere and Continuity. Phase 1 focused on encouraging fans to catch up with the series with creative messaging and engaging incentives. • Details on all airings of season 1 on HBO, HBO On Demand, and HBO GO, including marathons. • Promotion around the season 1 DVD release, including a promoted trend on Twitter, giveaways, and information about exclusive content and packaging. • Tweeted long-lead trailers, photos and more content from season 2 to help fans get excited and spread the word. Phase 2 launched approximately two weeks prior to premiere featuring engaging campaigns and tactics designed to rally fans ahead of the premiere. • The launch of GoT140, a Twitter activation campaign that encouraged fans to “describe Game of Thrones" using a special keyword in 140 characters or less. User tweets were featured on HBO Connect as well as in two special spots that ran on HBO. GoT 140 Spot: Phase 3 began the day of premiere in tandem with an all-day marathon of the first season on HBO. The campaign continues to run during the season, engaging existing fans and continuing to convert new ones. • Game of Thrones Day: HBO dedicated the entire Sunday, April 1 to the preparation for the season premiere episode, with the HBO social profiles joining in to engage live with eager fans. Custom shareable Twitter avatars and character posters helped fans show their dedication and HBO Connect Live Chats and Commentaries with cast and crew members provided a behind-the-scenes experience during the day-long marathon on HBO2. Results: • The Game of Thrones season 2 premiere accumulated a gross audience of 8.3MM viewers and was renewed almost immediately. • GoT was the most buzzed about cable show on 4/1 via Trendrr, (4th most social TV event overall) and Game of Thrones continues to lead Sunday night cable shows. • On 4/1, GoT terms trended 13 times organically on Twitter. Trends included #ifiHadaDirewolf, #IfiHadaDragon, #GoT140, #TheNorthRemembers, #GameofThrones and “Watching Game of Thrones" “Power is Power," “Drogon" “Tyrion Lannister" and “Stannis". • From 3/26 to 4/1, the GoT Twitter profile grew by nearly 30k connections to 280k Followers and currently exceeds 500k followers. 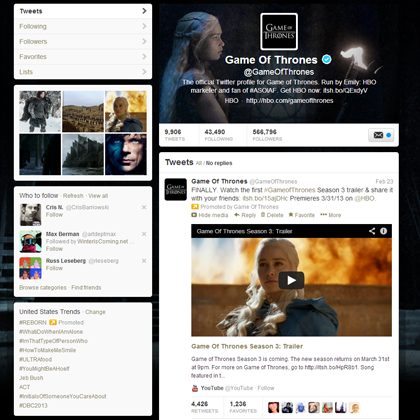