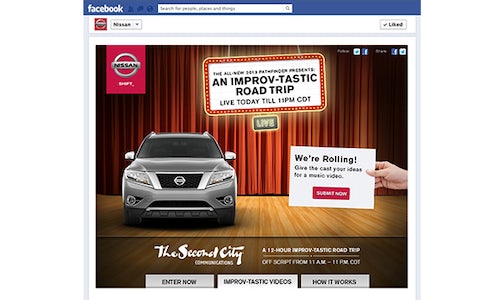 To generate awareness for the all-new 2013 Pathfinder and drive people to the new Pathfinder Facebook page, Nissan partnered with comedians from Second City, the world-famous improv troupe in Chicago, to create An Improv-tastic Road Trip. In just 12 hours, a live band, 10 comedians and two directors helped create more than 50 improvised, real-time music videos based on crowdsourced suggestions via Facebook.Prior to the launch of the all-new, redesigned Pathfinder, Nissan wanted to generate awareness for its next-gen SUV through engaging content hosted on the model’s new Facebook page. With their target audience in mind—cool, tech-savvy moms and dads who like to have fun and love music —Nissan partnered with Second City Communications to create An Improv-tastic Road Trip: 12 hours of improvised music videos in celebration of the all-new Pathfinder. Nissan kicked off An Improv-tastic Road Trip by launching a Facebook application. On the day of the big event, fans were asked to submit their favorite musical genre as well as who and what they would bring on a road trip. The fan-submitted suggestions were passed to the directors who quickly worked with the cast to turn them into lyrics, wardrobe and makeup that reflected features of the all-new Pathfinder. Simultaneously, the band developed a tune in the given genre. In less than 15 minutes it was showtime! One by one, each video was performed, filmed and uploaded to the Facebook tab, and sent to the fan that made the suggestion. An Improv-tastic Road Trip was a truly ambitious undertaking, requiring the planning and creation of an astounding amount of original content in just 12 hours—50 videos complete with hair, makeup, songwriting, and choreography. While many other brands use comedy in marketing campaigns, Improv-tastic focused on creating comedy with a purpose. Not only were the videos creative and hilarious, each one conveyed a key feature of the Pathfinder (“Flat tires, yo, we dissed ‘em. / We got a Tire Pressure Monitoring System…"). The videos’ humor and production value made them entertaining even for users who weren’t able to submit an idea or tune in on the day of the event, allowing Nissan to extend the life of the program across social channels for weeks. The program succeeded in achieving its primary objectives – it not only created awareness of the all-new Pathfinder with 182 million impressions, it also significantly grew the Nissan Pathfinder Facebook community from 0 to 19,028 fans in less than three weeks. It also generated 4,772 handraisers for more information on the all-new Pathfinder, and the videos produced during the event cumulatively attracted 143,589 total views. An Improv-tastic Road Trip was the first campaign of its kind, pushing the boundaries of crowdsourcing to generate awareness and engagement around a vehicle launch. 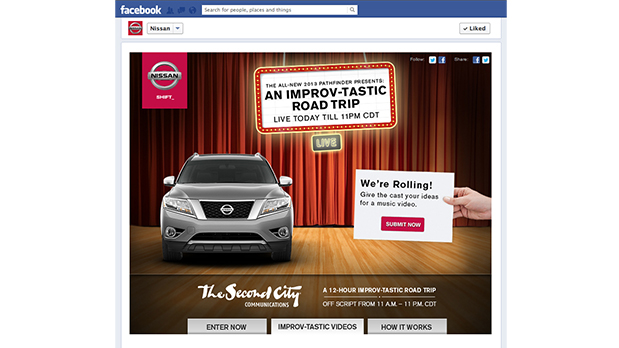