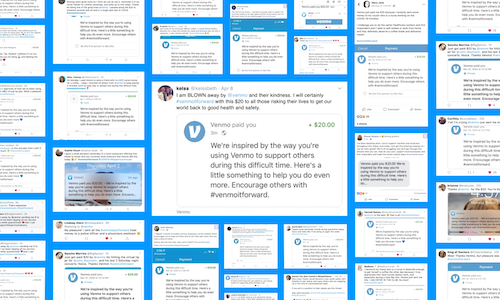 Venmo was founded in 2009 by two former college roommates who wanted a better way to pay each other back. Over the years, Venmo has evolved from a simple SMS platform to send and receive money, to a social payments app with over 60 million users using the app to split bills, pay each other back for rent, and make purchases both online and offline.

In early 2020, we started to see a huge shift in how Venmo was being used during the coronavirus pandemic. Instead of splitting drinks or pizza, people were proactively helping one another on our platform, from raising money for those in need, to supporting nurses and doctors on the front lines. Although these unprecedented times led to new use cases, it was not the first time we had seen the power of Venmo users connecting with and helping one another. We decided to celebrate and further fuel the ongoing generosity of the Venmo community by equipping them to support others even more on our platform.

To further help the “helpers,” Venmo dropped $20 into the accounts of users who generously contributed to others on Venmo, from sending coffee money to healthcare workers, to contributing towards virtual tip jars for artists. Our team selected users based on public payment notes that talked about supporting someone else during the pandemic (e.g. paying it forward for a coffee to an essential worker, tipping artists who played virtual concerts).

Through our surprise money drops, we helped 30K Venmo users to #VenmoItForward; over 50% paid it forward to two or three more people, creating a viral social movement. We’ve seen an overwhelmingly positive response, with over 4.5K uses of our hashtag on Venmo and over 3.4K mentions on social media to date. On 4/27, The Ellen Show joined the #VenmoItForward movement to send a total of $100K via Venmo to 400 people on her show, garnering over 15.2M impressions.

We also extended #VenmoItForward when the Black Lives Matter movement gained national momentum. When we saw Venmo users supporting the Black community and causes to further racial equality and justice, we decided to help the “helpers” extend the reach of their contributions once again and dropped $20 into the accounts of over 12.5K users.