To increase voter access for the LGBTQ community, MTV and Logo joined forces with Trans Lifeline to create a new youth microgrant program that helped 250 individuals change their legal name and update their government IDs. In many states, IDs are required to vote, disproportionately impacting trans and non-binary people who might not have access to a proper ID.

To bring the impact of this program to life, MTV partnered with Moross Studios, led by non-binary artist Kate Moross, to create a short animated piece that follows the journeys of three transgender and non-binary young people from across the United States as they reflect on their experiences updating their IDs to easily and safely participate in the election. Pop singer-songwriter and outspoken advocate for the transgender community, Kim Petras, served as narrator of the introduction and closing and sat down for an exclusive interview with PEOPLE Magazine to shine a light on this impactful partnership.

The goals of the video were to:

Thanks to this collaboration, we were able to help raise over $200,000 additional dollars for Trans Lifeline through donations from our MTV and Logo audiences, and another sizable corporate gift to their microgrant program that came in partly due to the visibility and recognition this program provided.

All across America, trans youth face problems updating their government IDs and documents to reflect their true identity-- which makes it more difficult for them to vote. These challenges were magnified by COVID-19 which resulted in the State Department no longer updating passports, and many courts closed temporarily and/or raised the fees associated with legal name and gender changes." We know how important trans and non-binary people’s voices are, so our goal in this program was to help them use their power in the 2020 election, and be able to vote as their true selves when they cast their ballots, no matter their circumstances.

To ensure that the video was true to the experiences and stories of our grantees and was developed in a COVID-friendly way, we engaged Studio Moross early in the process to help us think through how best to develop an inspiring spot that could educate our communities about the challenges trans people face in voting.

Additionally, to help expand our reach, MTV’s +1 the Vote campaign partnered with our sister brand, Logo, which serves as the dominant entertainment brand and digital destination inspired by the LGBTQ community. We also worked with Logo’s NewNowNext editorial team to ensure that the three grantees who are featured in the video had the opportunity to share their stories in more detail by being interviewed for this popular source of LGBTQ+ news and entertainment.

Kim Petras’ commitment to advocacy for trans youth made her the perfect fit to be a talent representative in the video alongside the grant winners, and so we engaged her team early to ensure she could participate in the video as a moderator or narrator.

And finally, to ensure that our viewers had all resources readily available to them, we also built a one-stop-shopping website at translifeline.mtv.com that is equipped with a voter registration portal, as well as key resources for trans and non-binary people looking to better understand how they too can update their IDs, look into ID laws in their state, and learn about Trans Lifeline’s transformative work.

We are proud to have supported 250 trans youth in updating their IDs as part of this program ($502 per grantee), and were honored to be able to shine a light on this opportunity as part of our commitment to voter access and to uplifting LGBTQ+ voices. Having an ID that doesn’t match your identity affects trans people daily - from using a debit card to getting hired at a job to having a landlord do a credit check.

To shine a light on and commemorate Pride Month, MTV released the video at the end of June 2020 on the company’s digital platforms, which spans over 76.9 million followers. The video was also posted by Kim Petras, Peppermint, Kai West and Yoonj Kim. In addition, Trans Lifeline raised over $113,000 from 1,157 donors in the week following the release, and garnered another generous corporate donor who was inspired by our partnership to contribute to their microgrant program - bringing the total raised to over $200,000.

Kim Petras also sat down with PEOPLE Magazine for an exclusive interview about this partnership, which helped give visibility to the challenges that trans and non-binary people face in obtaining an ID, and in easily casting their ballots; and lifted up the amazing work of Trans Lifeline so others could learn how they too could help support their efforts. We were very pleased that this partnership could play an important role in contributing to Trans Lifeline’s continued growth and development. 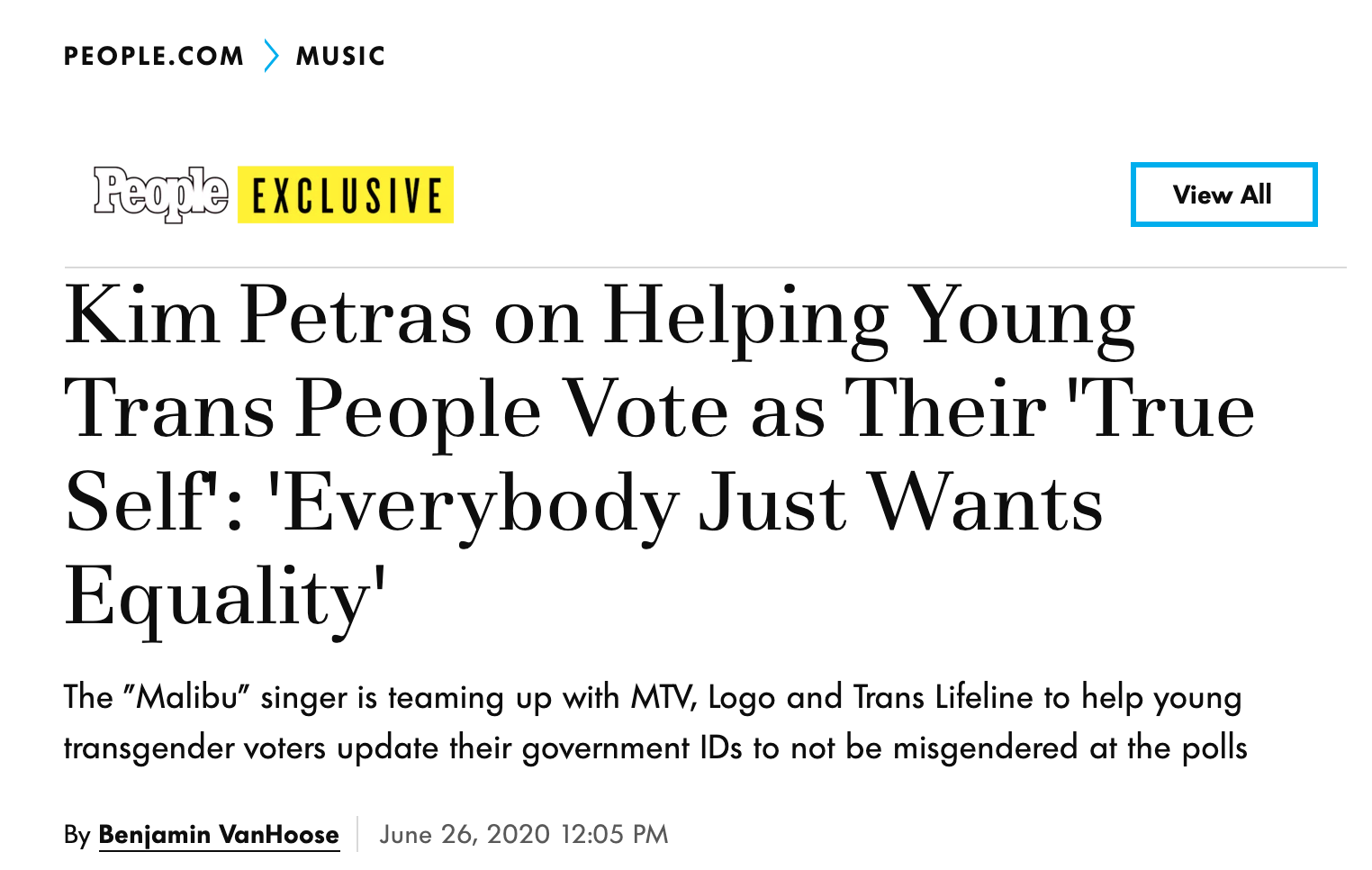 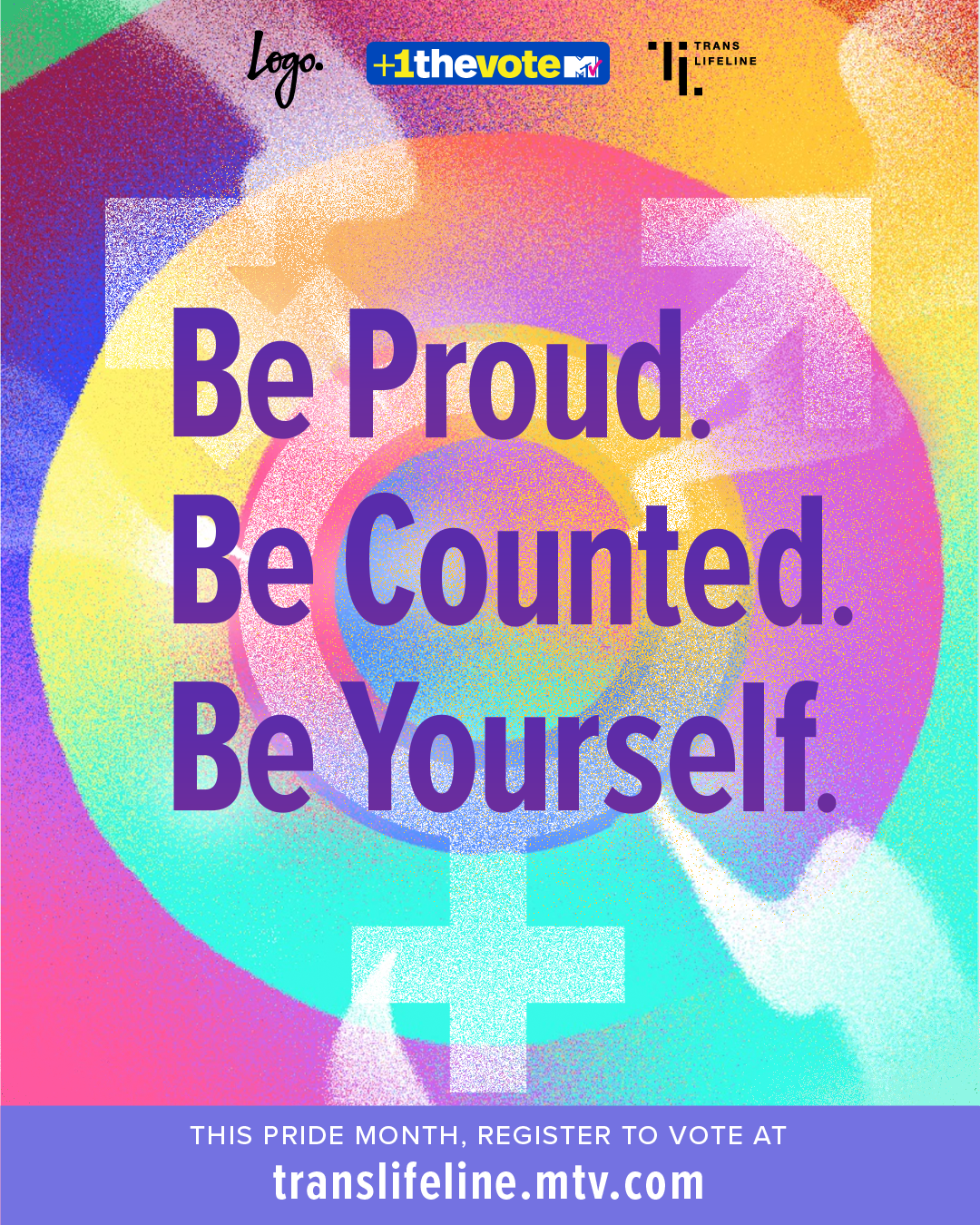