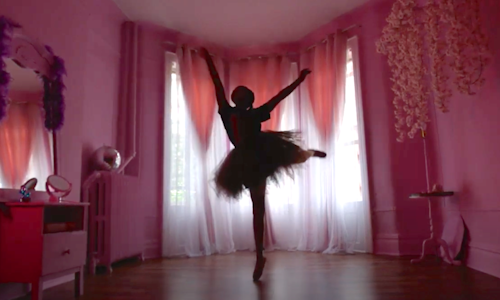 The Greatness of Girls

A recent study revealed that when girls turn 8 years old, something strange and alarming begins to happen: their confidence plummets. By the time they're 14, it's likely their confidence has fallen by up to 30%. So we asked a young ballerina of color, Shannen, to answer a few questions about life as a 10-year-old -- but she had no idea that, right outside the door, a professional ballerina from the New York City Ballet was waiting to give her some very special words of wisdom. With this video, we set out to inspire Shannen, and girls everywhere, to truly understand their greatness.

After getting to know Shannen and her challenges as a young ballerina of color, we set out to bring to light the issues she faces every day -- from pointe shoes in the wrong skin tone, to having few other girls of color in her class, to feeling out of place for the way she wears her hair. We wanted to give her a space to be herself, showcase her amazing talents, and make her feel powerful and special.

To help Shannen to see just how great she could become, we wanted to pair her with a future projection of herself, so we coordinated with the New York City Ballet to arrange a special surprise mentor -- a professional ballerina of color who had faced the same obstacles as Shannen growing up.

In order to capture the common perception of what it means to be a girl, we scouted a very special all-pink studio and outfitted it to emulate a little girl's bedroom.

Hoping to create unfilitered snapshots of her personality, we asked Shannen to be herself on camera, so we captured some beautiful moments of her repairing her pointe shoe when it broke, or her giggling and whispering to her mom between questions.

We also wanted to exhibit her incredible talent, so we asked her to improvisationally dance and showcase her gymnastic abilities.

We wanted to create something that inspired, encouraged, and supported young girls, to help them fully realize their worth and potential at a critical time in their lives, when their confidence is plummeting.

We aimed to create something very sincere and sweet, but powerful and thought-provoking too, and we think we captured that.

Video for The Greatness of Girls